Naming of an organic compound containing nitrogen and fluoride

I'm don't have a background in chemistry but I've been doing a project on computer aided molecular design and one of the resulting molecules was: 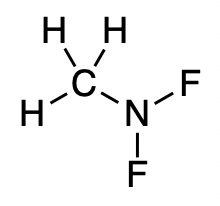 I'm having trouble naming this molecule let alone research if it is viable. I would appreciate any help in either naming or disqualifying it as infeasible.

P-62.4 N-SUBSTITUTION OF AMINES AND IMINES BY HETEROATOMS

Traditionally, substitution on the nitrogen atom of amines and imines was allowed for all characteristic groups cited as prefixes (see Table 5.1). This approach is maintained in these recommendations, unless a higher class is formed that must be named in accordance with the seniority of classes (see P-41).
This new rule is applied to prefixes such as Cl and other halogen atoms, $\ce{{-}BrO}$ and other acyl similar groups, $\ce{{-}NO}$, $\ce{{-}NO2}$, $\ce{{-}OR}$, $\ce{{-}SO2{-}R}$, $\ce{{-}SO{-}R}$, and even $\ce{{-}OH}$ groups and chalcogen analogues.

Thus, the preferred name for the compound that is given in the question is N-fluoro-N-methylhypofluorous amide and not N,N-difluoromethanamine.

A similar example given in the Blue Book is $\ce{CH3{-}N{-}(NO2)2}$, which is named N-methyl-N-nitronitramide and not N,N-dinitromethanamine.

2
Omission of locants for functional groups in IUPAC names
3
Organic molecules with 21.62% oxygen
3
Purification of Solid Phase Synthesized Peptide
2
Determining number of unique hydrogens in lactupicrinal 1H NMR
0
A question about rotational symmetry of organic molecules and in particular, the cyclic Isomers of C3H4X2