I'm having trouble understanding which hydrogens are magnetically distinct in the following molecule (lactupicrinal): 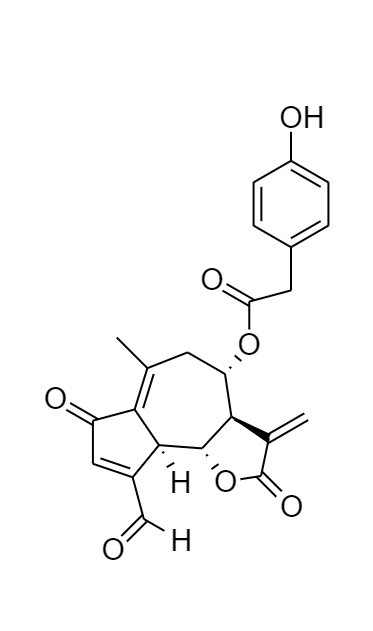 I've counted all the hydrogens (there are 20) and I know that hydrogens in a methyl group are all chemically the same (I think), but I don't know about the hydrogens in the ethyl group (double bonded on the lower right side). Am I right in that all other hydrogens outside of those groups are distinct, or are the mirrored hydrogens on the benzene ring also equivalent? Please help, I'm completely at a loss and I've been trying desperately to understand hydrogen equivalence for weeks.

Your question doesn't sound like you care about exact splitting, so I'm going to ignore magnetic equivalence/inequivalence. If you do care, you need to take that into account.

For the purposes of this discussion, equivalent means chemically equivalent.

You also need to keep in mind that NMR is achiral. In other words, opposite enantiomers will produce the same spectrum.

The standard procedure is to replace the atom of interest with something that is distinguishable from the regular atom. I usually replace an $\ce{H}$ atom with an $\ce{H}*$, but anything will do, provided it's still a hydrogen but different from the others.

With this replacement you've created a new molecule.

For two specific hydrogen atoms, you can perform the replacement operation to generate two molecules.

0
Unexplained peak cluster in proton NMR trace?
1
7,7-dichlorobicyclo[4.1.0]heptane NMR solving
4
Naming the spin system present in ethyl butanoate
3
How many total absorptions would appear on proton -NMR spectrum for this molecule?
7
NMR Splitting for Adjacent, Equivalent Hydrogens?
5
What is the proton NMR spectrum of p-methoxyphenol?
15
Where does magnetic inequivalence come from?
2
How to assign priorities around the asymmetric carbon with its substituents having multiple bonds?
0
How to identify the structure of an organic acid based on its reactivity, mass and NMR spectrum?
1
1H NMR of cyclohexanecarbaldehyde