A question about rotational symmetry of organic molecules and in particular, the cyclic Isomers of C3H4X2

I was thinking about an organic chemistry problem a few days ago but reached a dead end. There were 2 parts to this question.

The first was thinking about the isomers of 'C3H4X2' [where X could be anything like a halogen or a deuterium etc].

I came up with the following 7 isomers: 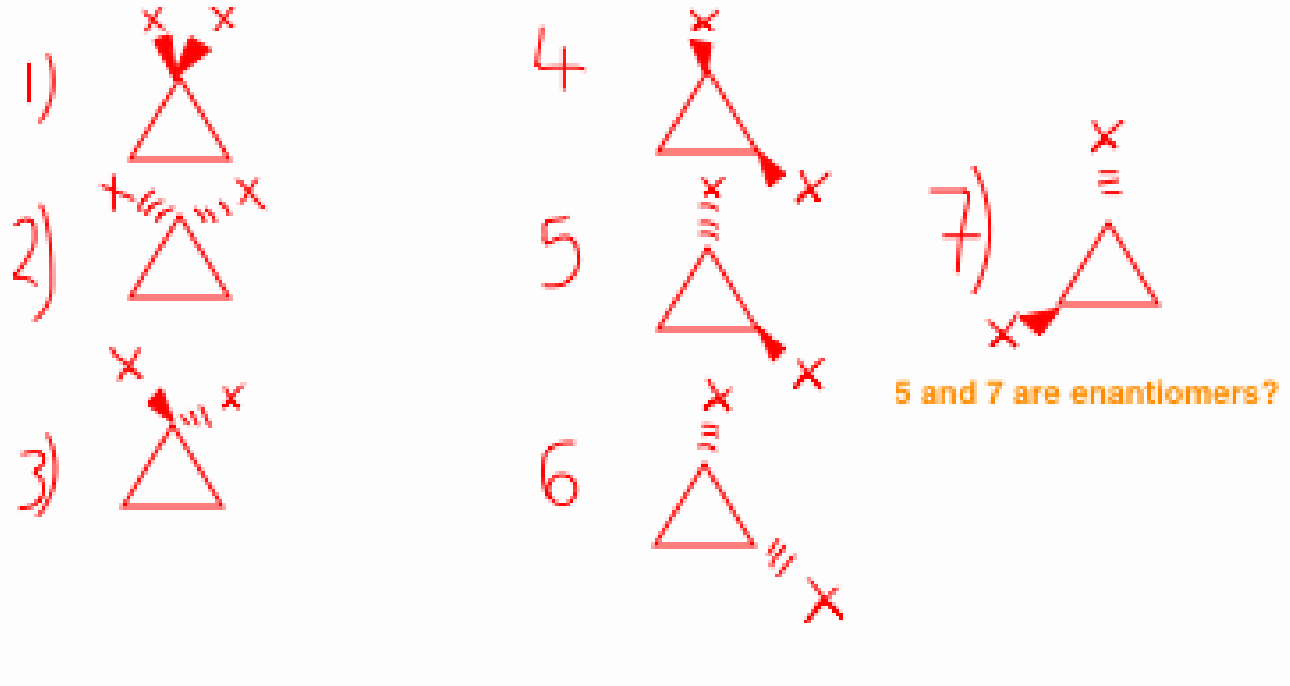 (I've really tried to make it as clear as possible! Hopefully it has worked!)

...but a website I found stated that there were only 4: 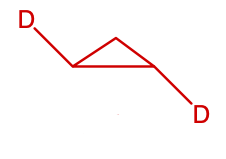 ;with their 'D' representing a deuterium.

So this is the first aspect of my quandary - what am I doing wrong when I draw these isomers!

The same website says that molecule A (from above) plane symmetry and rotational symmetry, which is fine.

But it also says that molecule C has plane symmetry but not rotational. Why is this? Surely if I rotate this molecule 60 degrees I get the same shape?

And then finally, they say that molecules B and D have rotational symmetry but not plane symmetry which I think I understand but would appreciate any further comments if anyone had them.

Ultimately, I would be very grateful if someone could point me towards something which could help me understand rotational symmetry in organic molecules and in particular why these examples given above have their particular symmetries! Thank you very much, everyone!

If the website diagram didn't clarify the situation immediately, the issue is not to answer questions about 1 to 7, but to understand why the question is wrong.

My organic chemistry course had us playing around with molecular models - 3D representations of reality, one type with a metal framework representing the multivalent nucleus and plastic tubes representing bond lengths, the other type with wooden balls and springs. They are a far cry from reality - but molecular models give an added dimension of understanding.

Lacking such 3D models, and lacking an answer sheet, one possibility would be to go to 3D images on the web: they are actually in 2 dimensions, but with perspective in the drawing, so it could be sort of 2.5 D, like this: 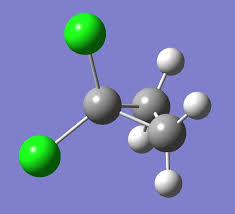 Only after knowing what is represented by the dotted lines and tilted bond can you understand what you are drawing. The proposed differences between structures 1, 2 and 3 indicate an unfamiliarity with what the bond representations actually mean. One look at the picture above should clarify everything. Perhaps one more comment should be added: the bonds between a carbon and its two substituents are never coplanar with the 3-carbon ring. Interestingly, I did not find any other similar images (of dichlorocylopropane). Everything was of the straight line or dashed line/tilted bond type. This just assumes that the lines/dashes have an obvious meaning. Sometimes a good picture is worth a thousand words. (This answer is worth 1254 words, if you include 1000 words for the picture.)

In your drawings you are correct that 5 and 7 are enantiomers. But 1 and 2 are inconsistent with tetrahedral bonding at the carbon atom (when two bonds are in the plane of the paper the others must be one above and one below), and 4 and 6 are just rotations of each other (around a twofold axis in the plane of the paper, not the perpendicular threefold one). Therefore the only actual and distinct isomers are 3, either 4 or 6, and the 5/7 enantiomeric pair.

For the molecule to have symmetry, the atoms need to match after the symmetry operation. For A, there are 2 planes of symmetry (the plane of the 3 carbons and the plane through the 2 hetero atoms and the attached carbon) and 1 axis of rotation symmetry (the intersection of the 2 planes). With B (and D), there are no planes since the atoms cannot be reflected through a plane and have the same element. It has axis of rotation through the carbon without the hetero atom and the middle of the bond in the ring. For C, there is neither a plane of symmetry nor an axis of symmetry.

Not the answer you're looking for? Browse other questions tagged organic-chemistry stereochemistry isomers symmetry or ask your own question.

4
Difference between conformational, constitutional, and structural isomers and the same and different molecules
7
Number of geometrical isomers when a cyclic ring is involved along with axis of symmetry
6
How to find the plane of symmetry in biphenyls and substituted cyclohexanes?
13
Relationship between the symmetry number of a molecule as used in rotational spectroscopy and point group
1
Stereo-isomerism in 7-methylbicyclo[2.2.1]hept-2-ene