The answer says $\ce{-CH=CH2}$ has higher priority, but I don't understand why. Shouldn't the first one have higher priority since oxygen has a greater atomic number than carbon?

Same for the second question as well.

You are correct. In both cases $\ce{CH2OH}$ has higher priority. the Cahn-Ingold-Prelog system uses atomic number as its primary determinant of priority. However, a popular misconception is that the CIP system uses something related to "size", like mass, number of carbon atoms, length of chain, etc.

Here is a way that I use when I teach the subject. In the following compound, the chirality center has two bonds to carbon atoms. The carbon atom on the left is bonded two an oxygen atom and two hydrogen atoms. The carbon atom on the right has two bonds to another carbon atom and one bond to a hydrogen atom. Write these connections vertically below the carbon atoms with highest atomic number at the top. Compare each row, and the first difference is where you judge. In this case, the first difference is the first row: oxygen has a higher atomic number than carbon. $\ce{CH2OH}$ has higher priority than $\ce{CH=CH2}$. 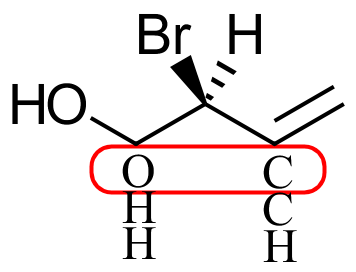 The answer should be $\ce{-CH2OH}$ in the first part. And, for the double bond, we have according to this Wikipedia about the Cahn Ingold Prelog rules,

a list is made for each group of the atoms bonded to the one directly attached to the stereocenter. Each list is arranged in order of decreasing atomic number. Then the lists are compared atom by atom; at the earliest difference, the group containing the atom of higher atomic number receives higher priority.

In the second part too, we need to consider the first difference which arises, and in this way, you can work out the solution.