Which has higher priority according to Cahn-Ingold-Prelog priority rules, vinyl or secondary butyl?

According to my textbook, vinyl has higher priority than isopropyl, because an atom which is connected by a double bond can be treated as two identical atoms (one of them is just an imaginary atom).

How about vinyl and secondary butyl? Should the imaginary atom be treated as that nothing else is connected to it? Does secondary butyl have higher priority?

The accepted answer is incorrect

There are some subtleties in the determination of stereochemistry in this question which need to be carefully explained with reference to the official rules, as laid out in Nomenclature of Organic Chemistry: IUPAC Recommendations and Preferred Names 2013 (Blue Book).

The gist of it is similar to that provided in other sources, e.g. Wikipedia, as cited in the accepted answer. However, many secondary sources do not fully capture the complexity of the Blue Book, and consequently end up providing simplified "rules" that do not really exist. Thus, although the actual ordering given in the accepted answer, i.e. sec-butyl > vinyl > isopropyl, is correct, the means by which this ordering is reached is not fully correct.

The actual rules are quoted verbatim at the bottom of this answer, and the following is an explanation tailored to the question at hand. We will first talk about sec-butyl and isopropyl as the rules are easier to follow, then we will move on to the vinyl substituent.

First, we must construct what is called a digraph for each of the three substituents, which refers to the hierarchical "tree" of atoms where each (non-terminal) atom is bonded to three other atoms that are one bond away. For sBu and iPr this is easy. 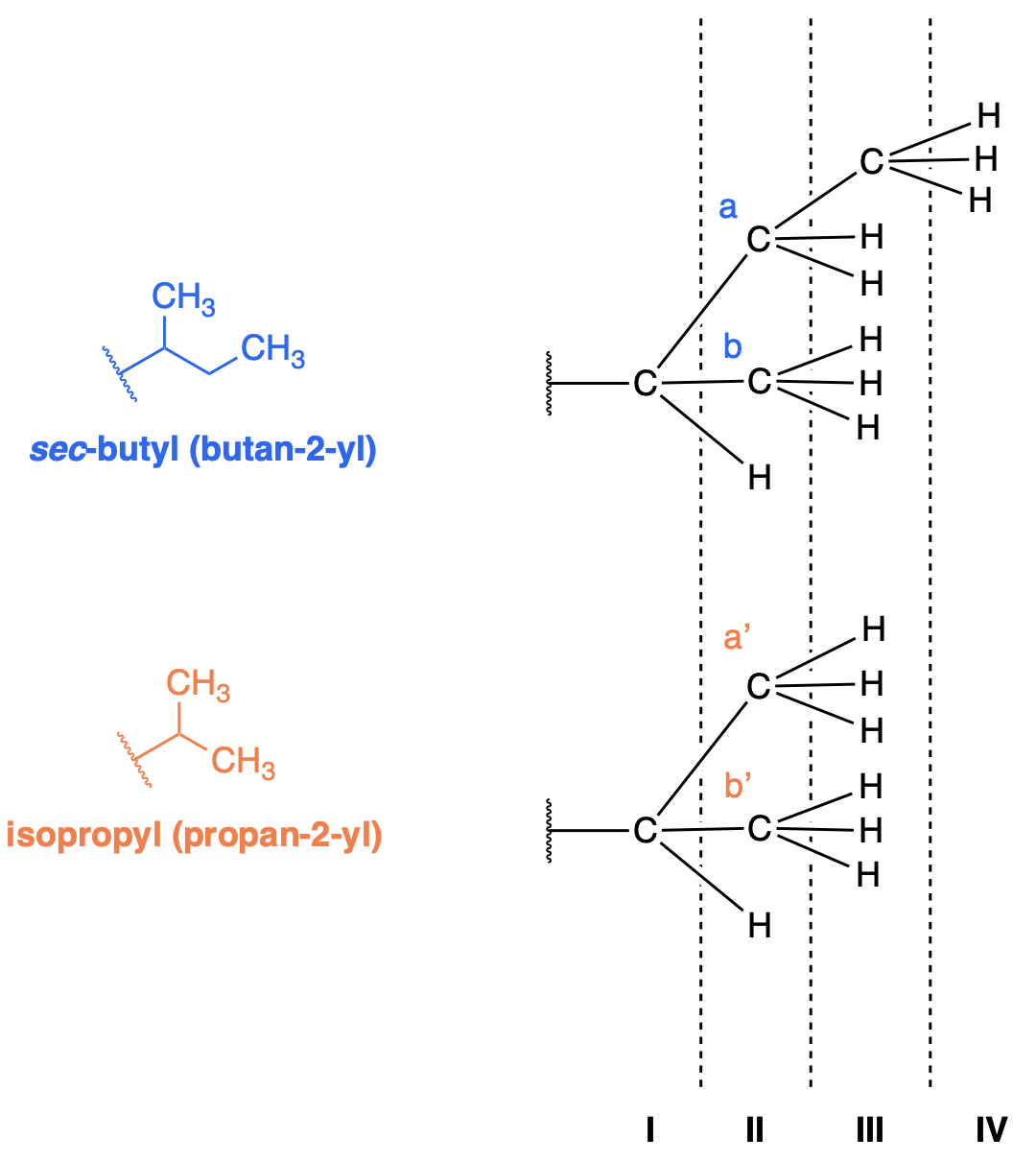 In order to rank the substituents we must go from Sphere I upwards.

When we get to Sphere III, it is not sufficient to simply list all six elements and declare that because CHHHHH > HHHHHH, sec-butyl has a greater priority over isopropyl. We need to prioritise our exploration: that is to say, we only search in one of the two branches going from Sphere II to Sphere III (labelled (a) or (b) in the diagram).

Thus in sec-butyl the preferred branch to explore is (a) and we can reject (b). In isopropyl, we find that both branches (a') and (b') are equivalent, thus it does not matter which we pick.

Going back to the original issue of sec-butyl vs isopropyl, in Sphere III we do not consider all six items, but only the three items that result from the preferred branch that we selected. Therefore:

This seems like a long-winded way of reaching the same conclusion, but it is the correct way.

Thus, the complete digraph for the vinyl group is as follows. 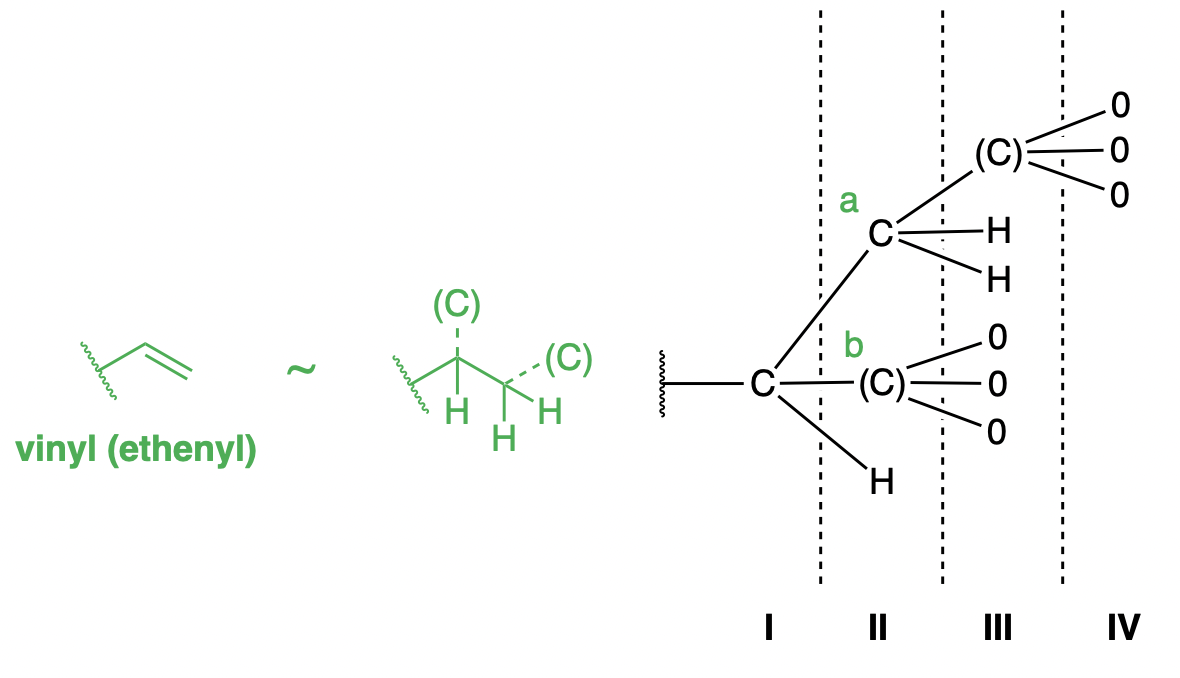 To the left of the actual digraph we can see the duplicate carbon atoms, denoted (C), explicitly drawn out. In the digraph these are connected to phantom atoms of atomic number 0, which are denoted as 0.

When we compare vinyl against isopropyl, we note that:

In order to go on to Sphere IV(!), we need to first rank the three atoms in each of the Sphere III trios, in order to prioritise our exploration. Clearly, this must be accomplished by choosing the carbon atoms in each trio.

So, in Sphere IV we have HHH (sec-butyl) > 000 (vinyl), and therefore the overall ranking is given by sec-butyl > vinyl > isopropyl. 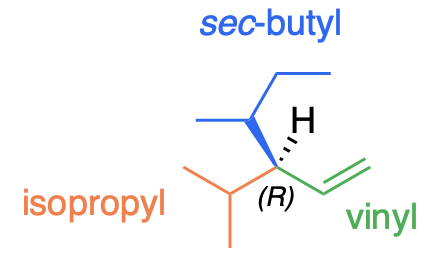 Note that P-92.2.1.1.3 provides a worked example of a digraph that is rather similar to the above (where Spheres III and IV must be explored to fully assign the ranking).

P-92.1.5 Exploration of a hierarchical digraph

Digraphs are constructed to show the ranking of atoms according to the toopological distance i.e. number of bonds, from the core of the stereogenic unit (i.e., center) and their evaluation by the Sequence Rules.

(b) Atoms in the nth sphere have precedence over those in the (n + 1)th sphere (Ranking Rule 1).

(c) The ranking of each atom in the nth sphere depends in the first place on the ranking of atoms of the same branch in [the] (n − 1)th sphere, and then the application of the Sequence Rules to it; the smaller the number, the higher the relative ranking (Ranking Rule 2).

(d) Those atoms in the nth sphere which are of equal rank with respect to those in the (n − 1)th sphere in the same branch are ranked by means of the Sequence Rules, first by the exhaustive application of Sequence Rule 1; if no decision is reached, Sequence Rule 2 is exhaustively applied, and so on. 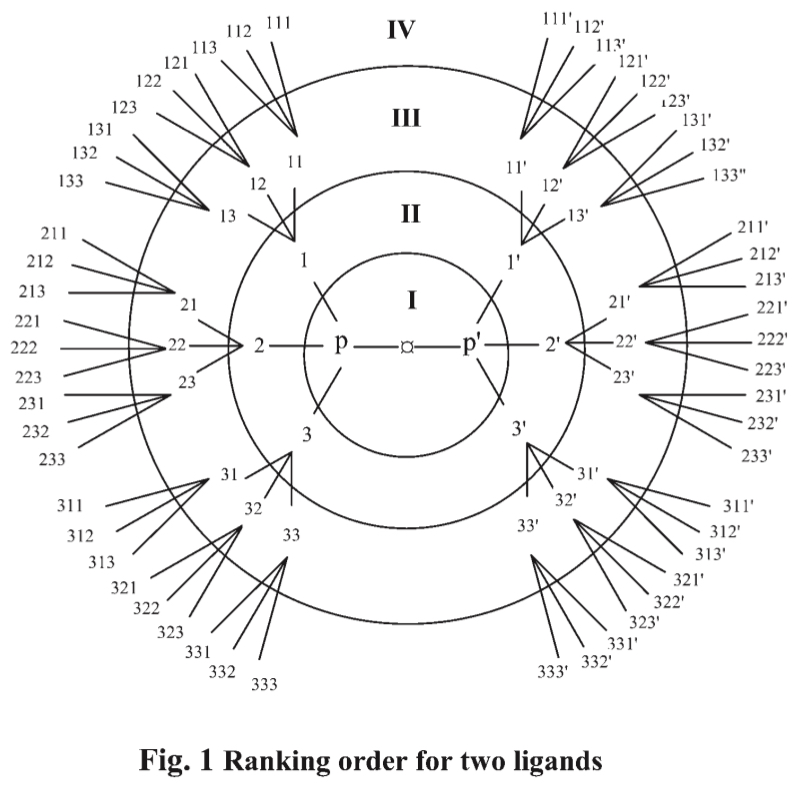 The assignment of CIP priorities has some intricate details when it comes to multiple bonds.

If an atom A is double-bonded to an atom B, A is treated as being singly bonded to two atoms: B and a ghost atom that has the same atomic number as B but is not attached to anything except A. In turn, when B is replaced with a list of attached atoms, A itself is excluded in accordance with the general principle of not doubling back along a bond that has just been followed, but a ghost atom for A is included so that the double bond is properly represented from both ends.

The sec-butyl rest has thus the highest priority of the three, followed by vinyl and then isopropyl.