Does anyone know how one reaches the conclusion that the 5C is R? I tried using the Cahn–Ingold–Prelog priority rules but kept getting confused.

To handle a molecule containing one or more cycles, one must first expand it into a tree (called a hierarchical digraph) by traversing bonds in all possible paths starting at the stereocenter. When the traversal encounters an atom through which the current path has already passed, a ghost atom is generated in order to keep the tree finite. A single atom of the original molecule may appear in many places (some as ghosts, some not) in the tree.

You don't need a digraph for this one. Your structure is A. Remove the double bond and add duplicate carbon atoms to each of the double bond carbons (B). These duplicate carbon atoms each bear three phantom atoms of atomic number zero. Clearly at C5 hydrogen has the lowest priority and methyl is the next lowest. The methylene groups at C4 and C6 are a tie. [There is no need to consider C2 since it comes into play for both routes. It is a wash.] The red carbon of the ethyl group bears C,H,H while the red duplicate carbon at C1 bears 0,0,0. Place your right hand on C5 and point your thumb in the direction of the hydrogen. Now your remaining fingers will point as follows: C4>C6>CH3>H. C5 is of the R-configuration. See, Twisting stereoisomers with rings to determine R/S. 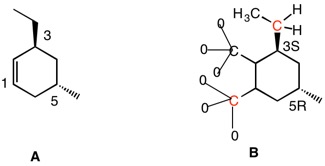 The most difficult thing in the presented problem is to determine the priority of the substituents at C5. User55119 explained the priority well but ended everything again with the notorious "hand rule", which is no less catastrophic than molecular turns. Because it is difficult to understand how to orient the hand. Knowing the priority of the substituents and the direction of their decrease AS IT SEEN on a picture (CW or CCW), you just need to assign a configuration. In the above example, the priority decreases counterclockwise, and the configuration should be S, but the lowest priority group (H) is CLOSER to us, so we have to change the configuration to the OPPOSITE and get 5R.

Not the answer you're looking for? Browse other questions tagged nomenclature stereochemistry chirality or ask your own question.