How is the configuration of an ester enolate double bond assigned according to CIP?

Two principal modern methods for enantioselective aldol reactions — the Evans aldol and the Masamune aldol — use a carboxylic-acid derived enolate rather than a ketone enolate as e.g. in the Paterson aldol reaction. For ‘traditional’ ketone enolates, a rule of thumb dictates that (E) enolates give anti-products and (Z) enolates give syn-products, typically rationalised by the Zimmermann-Traxler transition state model. Assigning (E) or (Z) to the enolate of an ethyl ketone poses no problems, as oxygen always has a higher Cahn-Ingold-Prelog priority than carbon, so it is all about the orientation of the enolate oxygen and the methyl group (see figure 1).

An Evans aldol reaction, the enolate of which is also shown in figure 1, can be analysed similarly. Oxygen has a higher priority than nitrogen, so the same basic rules apply.

A Masamune aldol reaction, however, has two oxygens attached to the enolate carbon, formally making it an O,O-ketene acetal. The CIP rules would dictate to follow the connectivities atom by atom. The Masamune auxilliary, like any ester, has a carbon attached to the oxygen. The enolate anion may be strongly attached to a certain atom (e.g. when using a boron- or titanium(IV)-mediated aldol reaction) but also may not be, or the attachment may be ambiguous (e.g. a potassium salt used for enolating in the presence of $\ce{LiCl}$).

Figure 1: The enolates in a Paterson-, Evans- and Masamune-aldol reaction and their double bond configurations where known.

To establish whether the double bond geometry is (E) or (Z), must I know if and which atom is attached to said oxygen? What if two different possibly attaching atoms (e.g. potassium and lithium) would give two different geometries? Is it possible to ignore said attachment altogether and just define the enolate oxygen as a free monoanion?

And do the CIP rules differ from common usage?

Whilst the (E)/(Z) nomenclature works fine for enolates of ketones and aldehydes, there is, as you've discovered an issue with the assignment of enolate geometry for esters (an amides and thioesters) since depending on the nature of the ester and the metal counter-ion used, we end up with a different answer.

Whilst the CIP rules are trivial to apply to any enolate, their use is not always conducive to describing the chemistry going on, especially when we end up with (E) and (Z) enolates both giving syn-adducts (for example) merely because we've changed a counter-ion (the actual spacial configuration of the enolate is identical in both cases).

To avoid this switching of configurations, we usually choose some other way of definition such that at the beginning of any thesis or SI where enolates are used, there is usually a statement that explains the way in which the author is planning to define their enolates (i.e. define them however you wish, but make sure you define them).

This statement defining the enolate geometry is generally a re-hash of Prof Evans who stated:

...irrespective of the formal CIP criteria, the O-atom bearing the metal (the OM residue) is given a higher priority, and the ipso-substituent X (in enolates) the lower one...

Whilst this is widely accepted, there are some issues, mainly because there are inconsistencies between groups: Evans' calls it (E) but Myers' calls it (Z) with Furstner calling it (E) but for a totally different reason than Evans'. For this reason alone, its always worth looking at the actual schemes and defining the enolate yourself rather than trusting that enolate X gives Y.

This issue is the source of the major objection to Evans' idea about the nomenclature. The whole reason we use E/Z/R/S is because they are well defined, I can tell you that I have (R)-..... and you'll know what I'm talking about, because we both follow the same rules, and if you don't, you're wrong.

The proposed solution to Evans' solution (Ernest Eliel) is to stop messing with these well defined descriptors, and instead go back to using cis and trans for enolate geometry, as these terms are less well defined and as such abusing them in this way doesn't lead to any significant confusion.

While this is not quite fit to be an answer, considering that it hardly answers most of your questions, it is too long and perhaps too important for a comment.

It has now been well established that, for many metal enolates, kinetic aldol diastereoselection is strongly influenced by enolate geometry. As a prelude to the ensuing discussion, the following nomenclature is adopted with regard to metal enolate isomerism. In considering the isomeric metal enolates 5 and 6 we adopt the E/Z notational format for olefins (35) with one operational change that greatly simplifies the subsequent discussion of enolate reactions. For the C-1 enolate substituents $\ce{R_1}$ and $\ce{OM}$, the highest priority designation is always assigned to the $\ce{OM}$ group, independent of the metal. The normal priority designations for substituents at C-2 are maintained. Thus, 5 and 6 are defined as having the Z and E geometries, respectively. The rational basis for incorporating this liberalisation of the E/Z notational format is based on the fact that, in terms of conferred reactivity, the $\ce{OM}$ ligand is the dominant substituent. 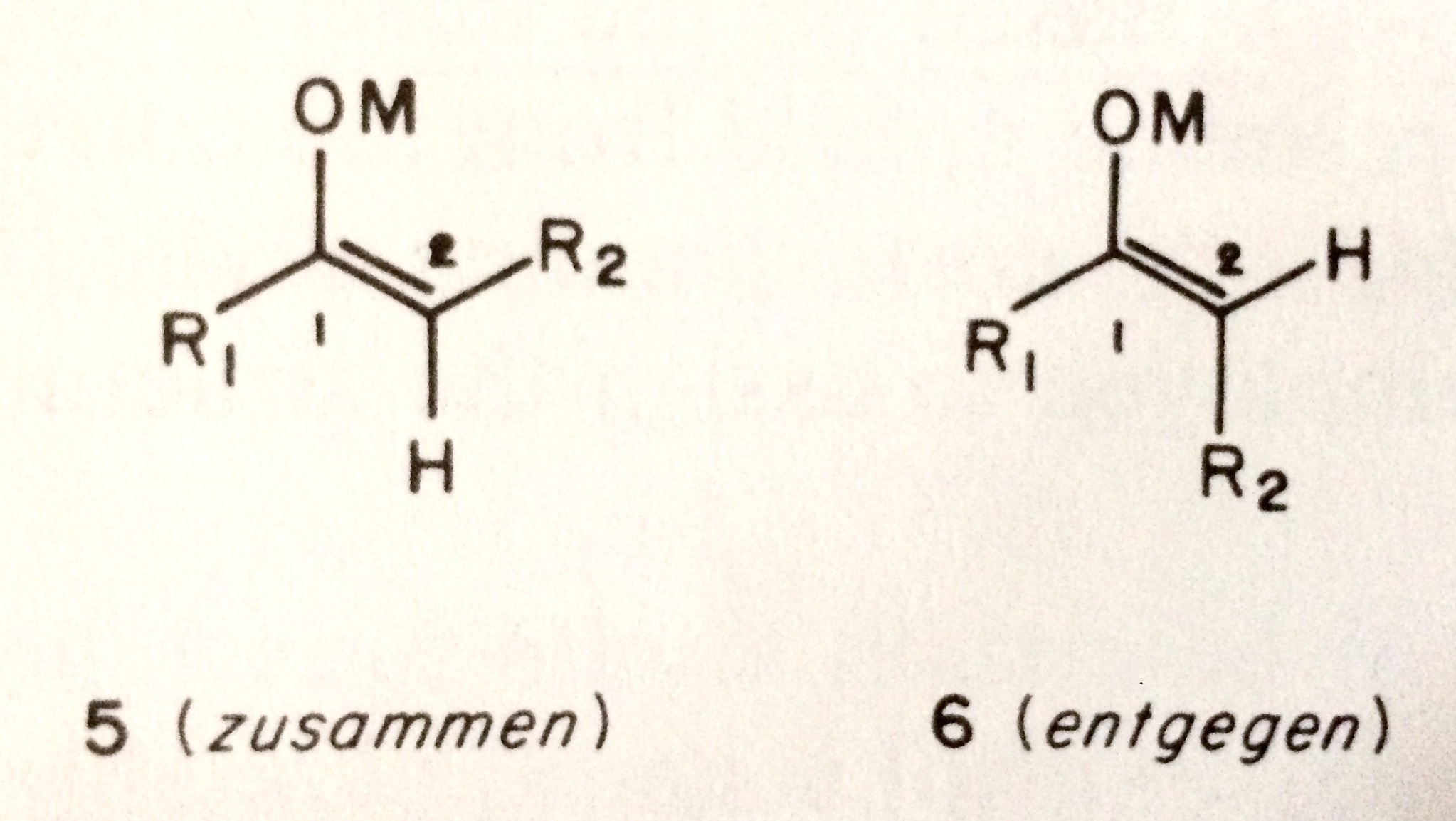 Although it's hardly a satisfying explanation, it does support what NotNicolaou wrote in his answer. Such an assignment may or may not contravene the Cahn-Ingold-Prelog rules, but is simply adopted for ease of use.

The quote that Marko mentioned in the comments is from Wyatt and Warren's Organic Synthesis: Strategy and Control (p 46):

There is a problem in defining enolates as E or Z. If we follow the rules strictly, a series of enolates with the same geometry, such as the four below, would change from E to Z as we changed the metal on the enolate or as we changed from ketone to ester to thiolester. When we are discussing enolates, we shall name them E or Z according to the relationship between the substituent R and the OMetal substituent. This is the generally agreed method and takes no notice whether the enolates are strictly E or Z alkenes.

Not the answer you're looking for? Browse other questions tagged nomenclature stereochemistry esters or ask your own question.

24
Is the nomenclature "primary", "secondary", "tertiary", and "quaternary" carbon atoms limited to sp3 carbon atoms?
1
R,S Configuration
1
What is the absolute configuration of carbon 4 in glucopyranose?
2
How to assign priorities around the asymmetric carbon with its substituents having multiple bonds?
1
Does an acetal need to have one hydrogen attached to its carbon?
1
Assigning R/S configurations to Fischer projections of 3‐chloro‐2‐hydroxybutanoic acid
9
Assigning R/S configuration
1
Nomenclature of aldehydes with double bonds and stereoisomerism