While of course the numeric values of the two scales are different, I thought that the rank of the elements would be the same, being electronegativity related to the properties of the atoms (for instance, the partial charge of molecules such as nitrogen trichloride relies on the electronegativity).

So, I was wondering: which scale is more accurate? And, if one is wrong, why are both scales still in use?

inorganic-chemistry electronegativity
Share
Improve this question
edited May 12, 2018 at 8:16

Allred-Rochow's electronegativity is determined by considering the charge experienced by an electron on the "surface" of the atom.

While the correlation between the two scales is not perfect, it is quite good, since the scales are calculated with different methods: 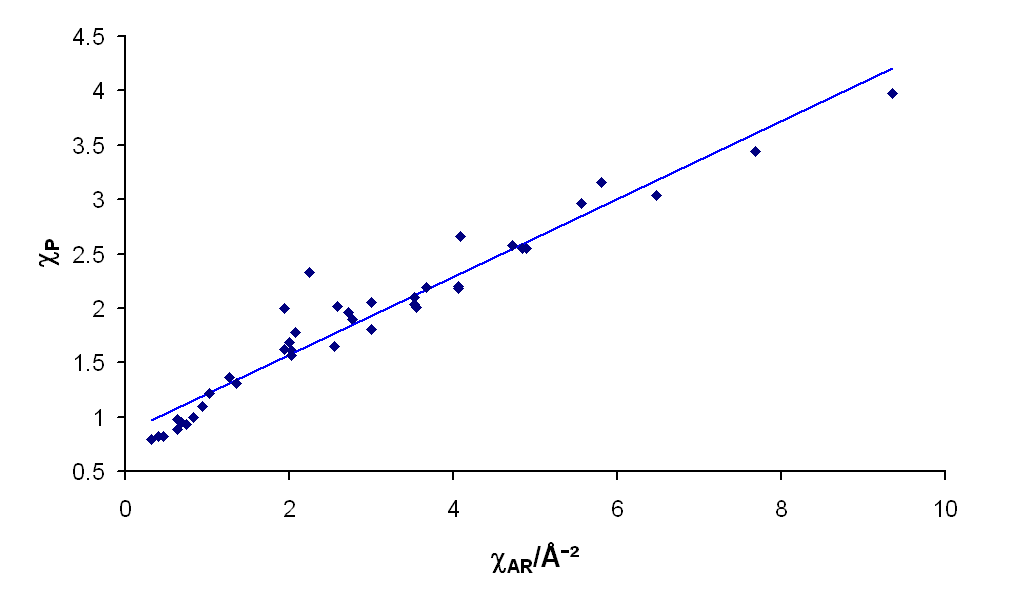 Also the partial charge is a model, useful in order to make rapid evaluations on real things. Sometimes, when molecules with almost covalent bonds (such as nitrogen trichloride) are modeled with different electronegativity scales, the partial charge may be different, but the actual electron cloud may not agree with the model.

The real electron density can be then calculated with quantomechanical methods, which are much more accurate and yet complicated than the simple model of electronegativity.

Neither scale is 'more accurate'. As The_Vinz said, each scale may be applied in different areas, and there is a moderately good correlation between the two scales once conversion factors are introduced.

Firstly, let's use the equations for the two scales to explain why the halogen electronegativity orders are different:

Pauling electronegativity is essentially based on the idea that an atom's electronegativity can be defined by the degree to which it polarizes bonds. Pauling's theorem states that the difference between the experimental bond dissociation enthalpy (BDE) of two atoms and the geometric mean of the BDE of each of those atoms' covalent homonuclear bonds is proportional to the two atoms' difference in electronegativity:

Essentially, this is a measure of the ionic character of a bond. The geometric mean term in the above equation represents a hypothetical nonpolar heteronuclear bond, so the difference between that BDE and the experimental BDE of the polar heteronuclear bond describes the degree to which the bond is polarized- its ionic character. A scaling factor is introduced and everything is measured with respect to fluorine's Pauling electronegativity value, which is arbitrarily set to 4.0:

So for chlorine (compared to fluorine): (1)

(mileage may vary with these calculations)

Allred-Rochow (AR) electronegativity, on the other hand, is defined directly by the force resisting removal of an atom's valence electron. This force is equivalent to:

where $Z^*$ is the effective nuclear charge, either measured experimentally or calculated using Slater's rules. Introducing some more scaling factors, which make things line up with Pauling electronegativity values, the equation for Allred-Rochow electronegativity is:

The truth is probably somewhere in between. The two scales are often used interchangeably, or a combination of the two values is used. Originally, the advantages had to do with the experimental basis. Bond dissociation energies may be easier to measure than exact effective nuclear charge or ionic radii. Based on their definitions, it seems to me that AR electronegativity would be more useful for looking at physical properties of an atom in a molecule, like ionization. Pauling electronegativity is really a measure of a bond's polarity.

In the case of day to day estimates about polar bonds in organic chemistry, I think Pauling electronegativity is more accurate. Ultimately, though, these are all quantum mechanical phenomena and exact values must be calculated using quantum methods that implicitly "understand" the real phenomenon that is electronegativity.

In the case of nitrogen and chlorine, though, Pauling electronegativity is closer to the "real" situation. For example, B3LYP/6-31G** calculations shown that nitrogen trichloride has a net dipole of -0.584 Debye, pointing towards the trichloride base of the trigonal pyramid[3], so the $\ce{N-Cl}$ bond is indeed polarized in the $\ce{Cl}$ direction as Pauling electronegativity seems to imply.