How to name the tautomers of hexane-2,4-dione correctly according to IUPAC rules?

Today I was considering to answer the question "Which tautomer of hexane-2,4-dione is more stable?" I wanted to run a few calculations and while preparing a directory structure I wanted to make sure that I used correct and unique names for the compounds. I am citing the picture in the named question:

I was going to derive the names of the structures from the parent compound hexane-2,4-dione. Hence I would have named compound 1 (Z)-2-hydroxyhex-2-en-4-one and 2 (Z)-4-hydroxyhex-3en-2-one.

When I recreated the above picture in ChemBioDraw and used it to autogenerate the name, the result for 1 was different: (Z)-5-hydroxyhex-4-en-3-one. See below. 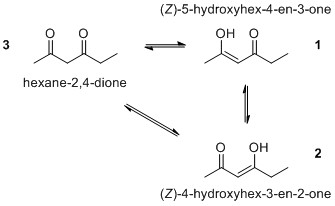 I am no expert on nomenclature and I do not have the blue book handy. Usually I rely on the names generated through software. Most of the times they are accurate enough to name a compound unambiguously and that is often what I am going for.
I understood from this answer, P-14.3.5 Lowest set of locants, that I should use the 4,2,2 set over the 5,3,2.

You numbered all locants together in a series and you found the lowest set of locants according to Subsection P-14.3.5 of the current version of Nomenclature of Organic Chemistry – IUPAC Recommendations and Preferred Names 2013 (Blue Book) since the locant set ‘2,2,4’ is lower than ‘3,4,5’.

This approach would be correct if all locants refer to detachable prefixes (like ‘2-hydroxy’). However, in the given compounds, the locants refer to prefixes (‘hydroxy’), endings (‘ene’), and suffixes (‘one’). The assignment of low locants to such different features is stipulated in Subsection P-14.4 as follows:

You will assign lowest locant to the group with highest priority. Here priority order is Keto>hydroxy>alkene. So use that numbering which gives lowest locant to keto group. So I think the names given by software are correct.

Not the answer you're looking for? Browse other questions tagged nomenclature reference-request erratum or ask your own question.

8
Doubts about IUPAC nomenclature of 4-ethyl-1-fluoro-2-nitrobenzene
5
Which tautomer of hexane-2,4-dione is more stable?

5
Are different enclosing mark types in chemical names needed to differentiate between substances?
4
How to define the atom numbers in unsaturated hydrocarbons correctly according to IUPAC?
6
Nomenclature and chemical formulae for bridged dinuclear chromium complexes
2
Does the name 4-nitrodiphenylmethane follow the IUPAC rules?
18
Organic Structure Challenge
0
Have I identified the IUPAC name of this ketone correctly?
1
Why should ether O be named as OXA in a bicyclo ring when it is a substituent?
0
Naming a given organic compound according to IUPAC naming rules