Doubts about IUPAC nomenclature of 4-ethyl-1-fluoro-2-nitrobenzene

Why is 4-ethyl-1-fluoro-2-nitrobenzene (structure is in the attached picture) called so ?

Shouldn't it be called as 1-ethyl-4-fluoro-3-nitrobenzene since the precedence of ethyl is greater than halogens? 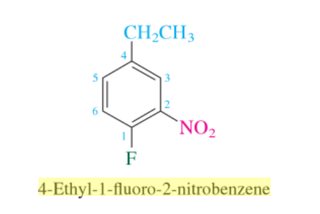 3
How to name the tautomers of hexane-2,4-dione correctly according to IUPAC rules?
1
What should be the name of this substituted cyclopentane?
0
IUPAC nomenclature of organic compound

10
What is the rationale of the IUPAC name for DDT?
2
Why does 1,2-dichloro-4-nitrobenzene undergo SNAr para and not meta to the nitro group?
5
Can we use prefixes like iso, neo, etc in IUPAC nomenclature of organic compounds?
2
Why do methylamine and ethylamine have nearly the same basicity constant?
1
IUPAC Naming. Which one is correct?
0
Clarification on IUPAC nomencalture
2
Naming a hexasubstituted benzene ring
4
Which one has higher priority according to Cahn–Ingold–Prelog rules?
0
IUPAC nomenclature of organic compound