In theory, $\ce{[Cr(H2O)6]^3+}$ ions have a bluish violet colour. However, many times in the lab we end up with a dark green solution. This is due to hydrolysis, coordination with sulphate (or other) ions, and polymerisation, most often dimerisation.

The degree of coordination depends on conditions, e.g., temperature. It is common to find the following equilibria. 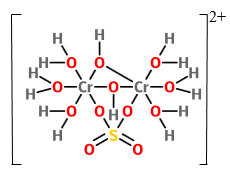 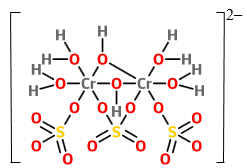 I am looking for official IUPAC names and formulae using latest recommendations for complexes. For instance, $\ce{[Pt(NH3)4][Pt(Cl)4]}$ is named tetraammineplatinum(II) tetrachloroplatinate(II); $\ce{[Cr(OH)(H2O)5]^2+}$ is pentaaquahydroxochromium(III) ion.

Thank you in advance!

P.S. Pictures were drawn using the free online software eMolecules. Also, feel free to correct any formatting and/or grammar errors. As for chemistry-related mistakes, please comment rather than edit.

$\require{unicode}$The rules for formulating and naming coordination compounds are presented in Chapter IR-9 of the current version of Nomenclature of Inorganic Chemistry – IUPAC Recommendations 2005 (Red Book). An abridged version is included in the IUPAC Technical Report Brief guide to the nomenclature of inorganic chemistry. Pure Appl. Chem. 2015, 87(9–10), 1039–1049 as well as in the corresponding four-sided lift-out document, which is available as supplementary material.

The line formula for a simple coordination entity is constructed within square brackets. The symbol for the central atom is placed first and is then followed by the symbols or abbreviations for the ligands (in alphabetical order according to the way they are presented in the formula).

IR-9.2.3.1 Sequence of symbols within the coordination formula

(i) The central atom symbol(s) is (are) listed first.

(ii) The ligand symbols (line formulae, abbreviations or acronyms) are then listed in alphabetical order (…). Thus, $\ce{CH3CN}$, $\ce{MeCN}$ and $\ce{NCMe}$ would be ordered under C, M and N respectively, and $\ce{CO}$ precedes $\ce{Cl}$ because single letter symbols precede two letter symbols. The placement of the ligand in the list does not depend on the charge of the ligand.

(iii) More information is conveyed by formulae that show ligands with the donor atom nearest the central atom; this procedure is recommended wherever possible, even for coordinated water.

Note that according to the recommendations in Item (iii), where possible, the coordinating (ligating) atom should be placed nearer the central atom in order to provide more information about the structure of the complex. Therefore, the line formula of the hexaaquachromium(3+) complex ion should be written as $\ce{[Cr(OH2)6]^3+}$ rather than $\ce{[Cr(H2O)6]^3+}$.

Bridging ligands, as far as they can be specified, are indicated by the Greek letter μ appearing before the ligand symbol or name and separated from it by a hyphen; (…)

(…) In formulae, bridging ligands are placed after terminal ligands of the same kind. (…)

Polynuclear complexes may be named differently according to whether only stoichiometry is to be specified or partial or complete structural information is to be included.

(…) Different applications may require flexibility in the writing of formulae. Thus, on occasion it may be desirable to violate the (…) guidelines in order to provide more information about the structure of the compound that the formula represents. In particular, this is the case for dinuclear compounds where a great deal of structural information can be provided by relaxing the ordering principles outlined in Section IR-9.2.3.1. (…)

As a general principle, as much structural information as possible should be presented when writing the formula or name of a polynuclear complex. However, polynuclear complexes may have structures so large and extended as to make a rational structure-based nomenclature impractical. Furthermore, their structures may be undefined or not suitably elucidated. In such cases, the principal function of the name or formula is to convey the stoichiometric proportions of the various moieties present.

Note, however, that the rules for formula writing may be relaxed in various ways in order better to display particular features of the structures in question. (…)

However, since this complex ion is symmetric, its formula may be further simplified.

For symmetrical dinuclear entities, the name may be simplified by employing multiplicative prefixes.

Furthermore, if necessary, you can indicate the connectivity of the sulfato ligand using the kappa convention (sulfato-2κ​O).

Not the answer you're looking for? Browse other questions tagged inorganic-chemistry nomenclature ions coordination-compounds or ask your own question.

4
What does the M in μM-Sux stand for?