Why are all the phenyl protons in benzyl alcohol equivalent in the ¹H-NMR spectrum?

Below is a $\ce{^1H}$ Nuclear Magnetic Resonance (NMR) spectrum for benzyl alcohol. The hydrogen in the alcohol group gives rise to a unique signal. The two hydrogens in $\ce{CH2}$ give rise to a unique signal with around twice the signal area. What I don't understand is why all hydrogens in the phenyl group are equivalent. My guess would have been there would be 3 signals from the phenyl ring. One pair of $\ce{H}$ that are equally distant from the methanol, another pair that is also equally distant, and last, a single hydrogen that is the furthest away from the methanol. Clearly this is not the case, and the 5 hydrogen give rise to a single signal only. 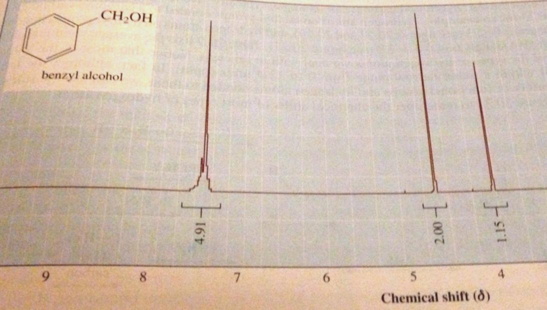 You're right, those five hydrogens are not magnetically equivalent. You would expect to see three signals for the aromatic protons.

If you look closer you'll see that the aromatic signal is not a perfect singlet, but is rather more complicated with an additional small peak and a broader base, it is a multiplet. You have three distinct signals, but they are so close in chemical shift that they overlap and result in this multiplet.

The three signals are very close in chemical shift, and have a strong coupling. If you have heard about $AB$ spin systems, where the CS difference is similar to the coupling constant, which make the outer two lines of the two doubletts become weaker, and the innner two stronger and move closer to one another: This is an $AB_2C_2$ system. The inner lines coalesce completely, and the outer lines become an unshapely foot around the central line.

If you had a stronger magnet, where the CS difference (in Hz) is proportionally larger, you would get multiple peaks and might even be able to integrate and identify them.

Not the answer you're looking for? Browse other questions tagged nmr-spectroscopy analytical-chemistry or ask your own question.

5
What kind of structure could give you a HNMR spectrum consisting of a singlet integrating to 5 protons?

3
NMR: Most deshielded protons (electron withdrawal)
1
Proton NMR signals and rings
9
1H (proton) NMR spectra for alkanes
10
Historically, how was the connection between NMR peaks and hydrogen atoms made?
0
Interpretation of an H NMR
5
What is the proton NMR spectrum of p-methoxyphenol?
5
Proton NMR Spectrum for Nicotinic Acid
5
What is number of 1H NMR signals for toluene?
1
H-NMR Equivalent Protons and Coupling of Glycerol
1
1H NMR of cyclohexanecarbaldehyde