Protons on aromatic rings in NMR

Recently, I have started to learn about nuclear magnetic resonance (NMR) in school and something which I cannot seem to reconcile is the fact that all aromatic protons on any substituted benzene ring would give the same chemical shift. This is very, very strange... Clearly, the aromatic protons are in different chemical environments due to the fact that they are different distances away from the substituents from the benzene ring. I understand that the strong delocalisation in the aromatic ring may tend to "even out" the electron distribution across all the aromatic $\ce {C-H}$ bonds. However, I would not think that this effect would result in all the aromatic protons having the same chemical shift. Could anyone propose a explanation to this peculiarity?

It also seems to suggest the equivalence of aromatic protons despite them being of different physical distance from the substituent. Here's another one from p. 278: 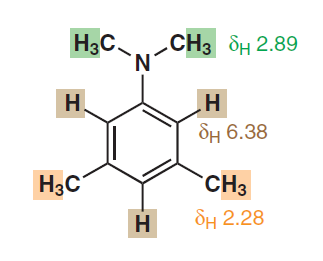 If strong delocalisation and aromaticity really is the effect responsible for this apparent chemical equivalence of the aromatic protons, then would we also observe such equivalent signals in other aromatic heterocycles or even in polyaromatic hydrocarbons?

The main idea is the difference between the terms Chemical Equivalence & Magnetic Equivalence, which is often misinterpreted. In the first example you have given, all the protons don't have the same chemical shifts and this is seen from the multiplet pattern as well. What you can obviously predict is that the two ortho protons are chemically equivalent, and the two meta protons are also chemically equivalent, and the para proton is a separate different type of proton. For observing these differences, what you need to do is to record the NMR at high frequency (e.g., $500$ or $\pu{600 MHz}$). There you can see the three different peaks clearly. Now in this case only, the two ortho protons are also magnetically equivalent as they couple with all the other protons equally, i.e. the $^3\!J_{H-H}$ and $^4\!J_{H-H}$ values are same for the two ortho protons, but in general this may not be the case at all (which is simply to consider another different para substitution at the ring, then the two ortho protons will become magnetically non-equivalent and therefore will have different chemical shift which is observable). Similar is the case with meta potons i.e. they are also magnetically equivalent. So those two protons will have same chemical shift. But ortho, meta, and para protons will definitely have different chemical shifts in your first example. If you zoom in or record the spectra in a high frequency machine, you should see a doublet of doublet peak (due to $^3\!J_{H-H}$ and $^4\!J_{H-H}$) for both ortho and meta protons, and a triplet of triplet for the para proton.

In the second example also, the two protons ortho to $\ce{-N(CH3)2}$ are chemically as well as magnetically equivalent as they both couple with the remaining proton in the same way. So, applying the similar logic you should see a doublet peak (due to $^4\!J_{H-H}$ only) for those two protons and a triplet peak for the remaining one and these two peaks should be at two different chemical shifts.

To encourage you more here are some spectra from the book Introduction to Spectroscopy which emphasize on aromatic regions and consider different spin-spin splitting and show how complicate a structure can be: 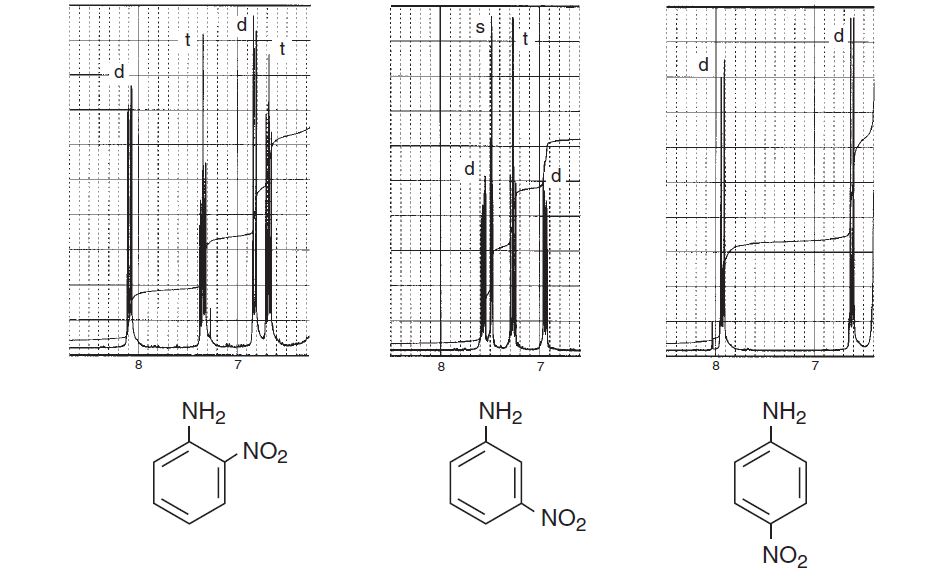 The above spectra depicts the differences in the spectra between ortho, meta, and para substitution in the benzene ring. The below two are some typical examples of complicated spectra due to spin-spin splitting as well as magnetic non-equivalence. 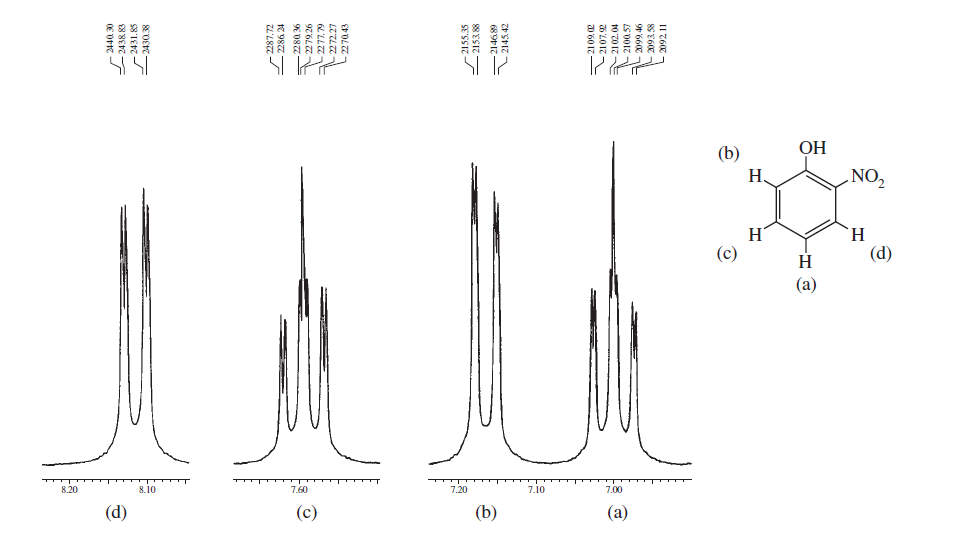 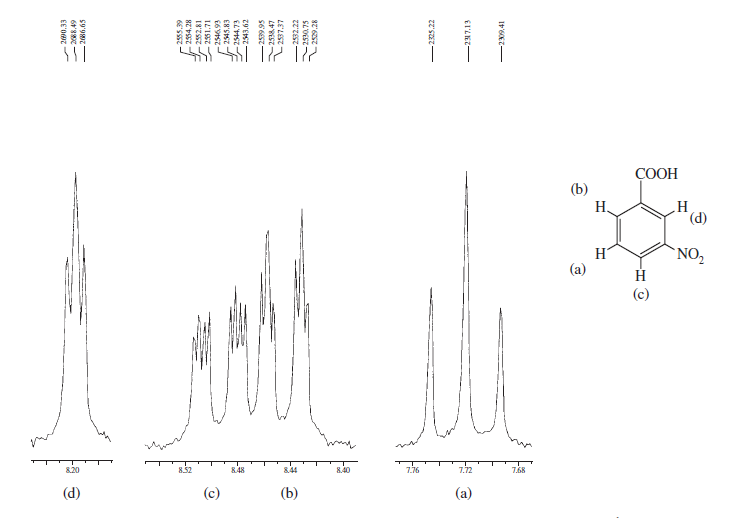 From these examples you can see that the aromatic protons can definitely come at distinct regions and what you need is to just record them in high field NMR machine and zoom into that region.

I think that the key here is to understand that stereo-electronic effects are limited because of the ring.

13
Can the amount of shielding in proton NMR caused by ring currents be predicted?
3
NMR: Most deshielded protons (electron withdrawal)
1
Proton NMR signals and rings
4
What happens to chemical shifts of protons close to aromatic systems in ¹H-NMR?
5
Geminal coupling constant of formaldehyde protons in NMR
1
Why does NMR deal with protons?
6
NMR - coupling of chemically equivalent protons
4
The carbon-13 NMR for 1,1,1-trichloroethane
4
NMR splitting of protons in a ring