What is the proton NMR spectrum of p-methoxyphenol?

To give some context, I am extremely unused to the proton NMR of benzene derivatives, and any (introductory) links telling me a bit about it would be appreciated. I'm aware of the theory behind NMR spectrosocopy, the 'n+1' rule, and the ways to tell if two Hydrogens are magnetically equivalent.

In theory, this structure is expected to provide four different signals:

The chemical shift of the aryl protons is influenced by the two, para standing towards each other, subsitutents; here: OH and methoxy. With their electronic properties, they influence the electron density of the aromatic ring, and eventually alter the location of the signals of the aryl H's. The centre of theses signals may be predicted by empirical increment rules which many textbooks about NMR include, like Silverstein, for example. Depending on the experimental conditions, accidentally they may simplify to a signal which only looks like a singlet:

Addition: The distance between the aryl H's and the phenol or the methoxy group (at least three bonds away) and their very similar electronic influence on the aromatic ring may render the aryl H's very similar. So it takes a spectrometer with higher measurement resolution (measurement points per ppm) and higher magnetic field to discern them. Rayment et al. published more recently in J. Org. Chem., 2012, 77, 7052–70602012 (doi 10.1021/jo301363h) data recorded again in $\ce{CDCl3}$, on an instrument with stronger magnetic field. To quote: 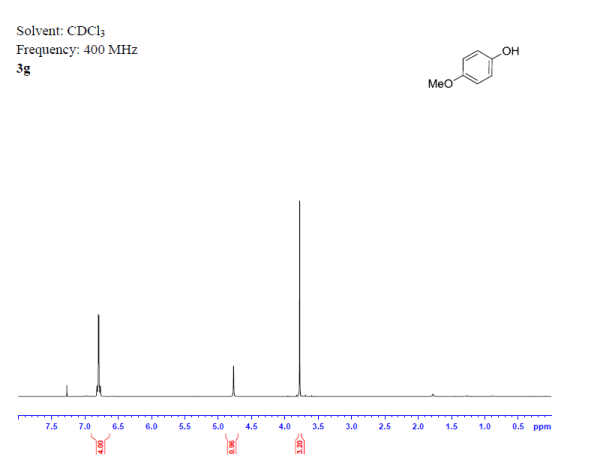 Even here, some discern, yet likely the two doublets overlap a bit, as a prediction by ChemDoodle suggests: 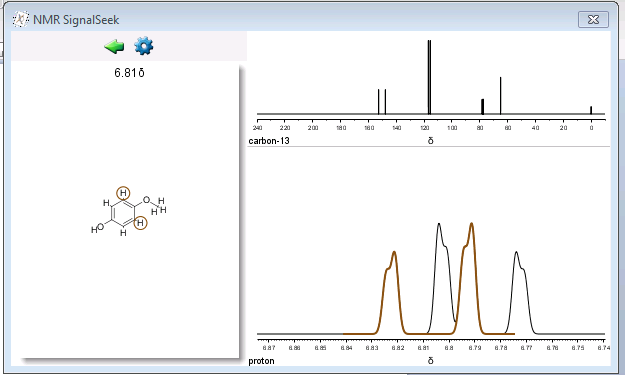 (the other doublet corresponds to the second pair of aryl H's). Note the spread of the scale, too. While I imagine even more advanced NMR spectrometer may eventually resolve the doublets (600 MHz is not so uncommon, and a few of about 1 GHz are around, too), I doubt someone will invest the more precious measurement time on these to delve more into detail and publish the then very high resolution 1H NMR, instead of collecting 1H NMR data of proteins and other natural products.

Addendum and correction: Following the comment by @long, I reread the relevant pages in Silverstein again. Stating the for aryl H's would yield two doublets is wrong.

There are three types of coupling each of the aryl protons in p-methoxy phenol participates which are illustrated below: 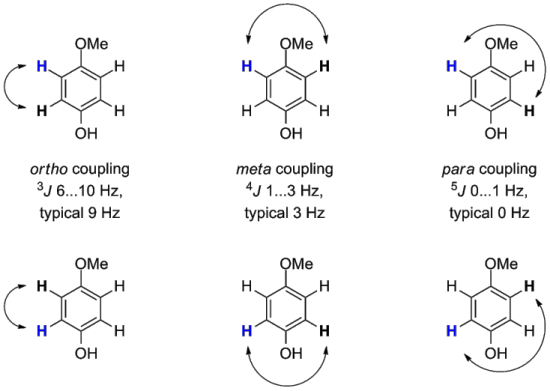 In blue is the proton which signal is of concern. In the top row, it is the left in ortho position towards the methoxy group. This proton couples with the close ortho standing proton (only three bonds away, hence $^3J$), typically with a coupling constant of $\pu{9 Hz}$, hence yielding according the $(n + 1)$ rule a doublet. Simultaneously the proton marked in blue couples with the meta standing one with a typical coupling constant of $\pu{3 Hz}$; hence the previous doublet would become a doublet of doublet (dd). Even farther distant, the para standing proton, hence coupling with an even lesser coupling constant which not every NMR spectrometer is capable to resolve -- but in principle yielding ddd, a doublet of doublet of doublet -- solely for this proton, up to $2 \times 2 \times 2 = \pu{8 signals}$ may become observable.

Following the theory further, the proton marked in blue of the bottom row is not identical to the one marked in the top row, and consequently, this proton may yield up to 8 observable signals, its own ddd. This already adds up to 16 lines, which however is not (yet) the end of nitpicking theory as -- according to Silverstein's textbook -- the aryl Hs on the left hand are not equivalent to the ones on the right and a total of 32 lines possibly to observe. 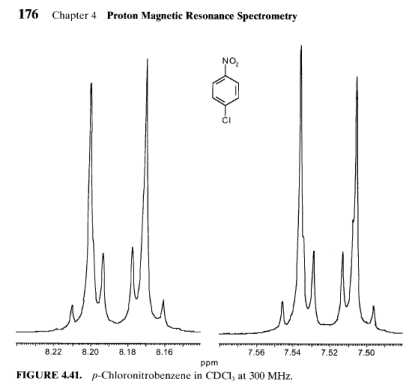 which will serve for a follow-up question by mine, to record the aryl H's in a signal in shape like a singlet was by chance.

Not the answer you're looking for? Browse other questions tagged analytical-chemistry spectroscopy nmr-spectroscopy protons or ask your own question.

35
Splitting of multiplets in ¹H NMR spectra?
18
What factors are important for quantitative analysis of a proton 1D-NMR spectrum?
1
Spins spin coupling on proton NMR for an aldehyde?
4
Proton NMR spectrum of aminocaproic acid
5
Proton NMR Spectrum for Nicotinic Acid
5
Utility of proton vs carbon NMR
0
Find the structural compound from carbon and proton NMR spectrum