Why is the electron-nucleus attraction modelled with only electrostatic interactions?

While reading about the structure of an atom, I've encountered (even in some renowned books) the statement that electrons and nuclei are attracted due to electrostatic, or Coulombic, attractions.

However, since the charged particles (electrons and nuclei) are moving, how can the Coulombic force be sufficient to describe their interactions? Surely electrostatics cannot be used in this context. Is it merely an approximation?

First note, that electrons do not move around a nucleus in an atom. At least, they do not do so in the classical sense. Yet, a non-zero orbital angular momentum $\vec{L}$ of an electron in an atom gives rise to the orbital magnetic dipole moment $\vec{\mu}_{L}$ and so the magnetic field is indeed generated by the "moving" electron. Plus, an electron has an intrinsic magnetic moment (spin) which also contributes to this magnetic field. The nucleus possibly possess orbital magnetic momentum as well (if has non-zero angular momentum) that couples with its spin which interacts with that of electron. These interactions splits the energy levels of the atom and the resulting hyperfine structure can be measured using radio-frequency spectroscopy.

And in principle, for a complete description of an atom we could use a model in which we treat the interaction between electron and nucleus taking magnetic interactions into account, i.e. similarly to how it is done in classical electrodynamics with the Lorentz law. There is a problem with the Lorentz law though - it is formulated in terms of forces and velocities and this terms are not even present in the vocabulary of quantum mechanics. So, the magnetic field must appear somehow differently in the Hamiltonian, and to make a long story short the full (non-relativistic) Hamiltonian for one electron in an external electromagnetic field is: $$ \hat{H} = \frac{1}{2m}(\boldsymbol{p} - e\boldsymbol{A})^2 + e\phi \, , $$ where $\phi$ is the scalar potential and $\boldsymbol{A}$ is the vector potential. And even in the absence of an external to the whole atom magnetic field, the nucleus itself gives rise to the vector potential $\boldsymbol{A}$.

It is a misconception that one finds in the physical literature too often. The correct Coulomb energy is not static, but varies with time implicitly as

with $\boldsymbol{R}$ the interparticle distance. The problem is many people confounds this with the field-theoretic quantity

which is a static quantity, besides divergent (and unphysical). This confusion is not a problem exclusive to quantum theory, one already finds this kind of confusion in classical physics. In Ref. [1] you can find a detailed mathematical proof that the Coulomb potential $\phi(\boldsymbol{R}(t))$ is not reducible to the field-theoretic potentials $\phi(\boldsymbol{r},t)$.

If all of the above was not enough, there are additional misconceptions in quantum theory regarding the time dependence of operators. One finds too often the claim that operators in the Heisenberg picture vary with time, but they do not in the Schrödinger picture. This is not true, and in more advanced textbooks one finds expressions such as

The point is that electrons and nuclei, all together attract or repel with non-electrostatic interactions, because electrons are never at rest in atoms.

In the nonrelativistic limit, the interaction between charges is given by the Coulomb potential $V_\mathrm{Coul}$. In the phase space formulation of quantum mechanics one simply uses this expression directly. In the Schrödinger wavefunction formulation one has first to replace position variables with Schrödinguer operators $\boldsymbol{x}\rightarrow \hat{\boldsymbol{x}}$; those operators maintain the implicit time dependence of the classical variables $\boldsymbol{x}=\boldsymbol{x}(t)$, and one obtains a Coulomb operator with a implicit time dependence $\hat{V}_\mathrm{Coul}(\hat{\boldsymbol{R}}(t))$.

This implicit time-dependence is not quoted in the literature, but it is needed to make sense of dynamical variables. For instance if we want to compute the velocity of an electron in the Schrödinger picture, we have first to obtain the velocity operator as

While there are quite a few answers here already, I would like to approach this without going into complicated theories.

Coulomb's law deals with electrostatic attraction. These attractions depend only on the magnitude of charges and the separation between them. However, while charges are moving, different types of interactions come into the picture. Those are called magnetic forces. Like electrostatic forces, their magnitude depend on the magnitude of the charges and the separation between them, but in addition, they also depend on the velocity of the charges, in both magnitude and direction.

If we represent the magnetic field by a vector $\vec{B}$, and a charge $q$ moving with a velocity $\vec{v}$, the force the charge experiences is:

The force acts perpendicular to both the field and the velocity.

Moving charges can also produce magnetic fields. The field produced is given by the Biot-Savart law.

where $\vec{r}$ is the position vector of the point where you are measuring the magnetic field, with respect to the moving charge as origin.

The combination of both the electric and magnetic fields together are needed in the case of moving charges.

But why aren't the magnetic fields considered in the Bohr model?

Let's see. In the Bohr model, you have a stationary nucleus, and an orbiting electron that follows a circular path. The electron moving in the circular path will be generating a magnetic field, that looks like this: 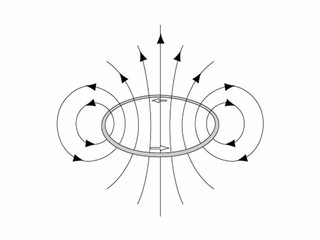 If you tried to use Biot-Savart law, you should be able to arrive at the conclusion that a spinning electron produces a magnetic field at the nucleus of with a magnitude of,

What we have derived above is perfectly valid, and has also been verified. Orbiting electrons do produce magnetic fields, and their magnetic moments have been determined in laboratories. The magnetic moment of a hydrogen atom, is called the Bohr magneton, is a very popular unit to measure magnetic moments in transition metal compounds and coordination compounds.

However, the nucleus is still at rest. A magnetic field cannot interact with a particle at rest, as we have seen earlier. So the magnetic fields do not affect the nucleus, and the simple electrostatic model is enough to predict the properties of the hydrogen atom.

Hopefully I clarified you completely. Leave a comment if you need more clarification.

Electrons and neutrons are not attracted from strong electrostatic interaction.

Electrons and nuclei are because nuclei contain protons. Coulombic physics are therefore entirely relevant for atoms, because protons bear a 1$e$ charge, while electrons bear a -1$e$ charge.

Neutrons interact with matter in two main ways: first, within the nucleus, through the strong force, reported to be ~137 times stronger than electromagnetic force. This is what binds neutrons to protons in the first place, in the tiny nucleus. The second is through interactions of magnetic fields. This second way is the only way that neutrons interact with matter outside of the nucleus, and it is what makes them useful for things like neutron-powder diffraction (an alternative to X-ray crystallography).

Not the answer you're looking for? Browse other questions tagged physical-chemistry quantum-chemistry electrons atoms or ask your own question.

13
What is a "hydrogen-like" or "hydrogenic" atom?

4
Is ionic bond just formed by "electrostatic" interaction between two oppositely charged ions?
4
How is the charge of covalently bonded atoms determined?
5
What effects would an electron in the nucleus have?
4
Is this a possible explanation as to why sigma bonds are stronger than pi bonds?
9
Trying to understand the necessity of orbital approximation or the independent electron model
2
In helium-2, would each electron experience a single positive charge from the nucleus?
6
Why is there an orbital angular momentum if the electron isn't properly revolving around the nucleus?
1
Electric double layer formation