Does fluorine in FNO3 have +1 oxidation number?

According to my textbook and also Wikipedia, fluorine nitrate is a compound which can be created (though it is unstable). Also my textbook says that fluorine has a $+1$ oxidation state. But how is $+1$ state of fluorine possible?

I read in another textbook that fluorine can only show $0$ and $-1$ oxidation states (even Wikipedia says so).

Can someone explain as to how fluorine nitrate exists with a $+1$ oxidation state of fluorine?

tl;dr The ambiguity is due to an unfortunate incompleteness of the previously (prior to 2016) existing rules. The oxidation state of fluorine in $\ce{FNO3}$ is $-1$ according to the present rules.

As a general reminder, it is important to understand, that oxidation states are a bookkeeping tool only, and that they hardly represent the general bonding in molecules. With that being said, it is a very simple and powerful tool in many situations. As it is very simple, one has to especially pay attention to its shortcomings or ambiguities.

Prior to 2016 the IUPAC recommended an incomplete set of rules, which I discussed in more detail in Electronegativity Considerations in Assigning Oxidation States.

The special case you have cited is very close to the case of $\ce{HOF}$, which has been previously discussed by me on two occasions already: Oxidation state of fluorine in HOF, What should be the oxidation state of oxygen in HOF (hypofluorous acid)? 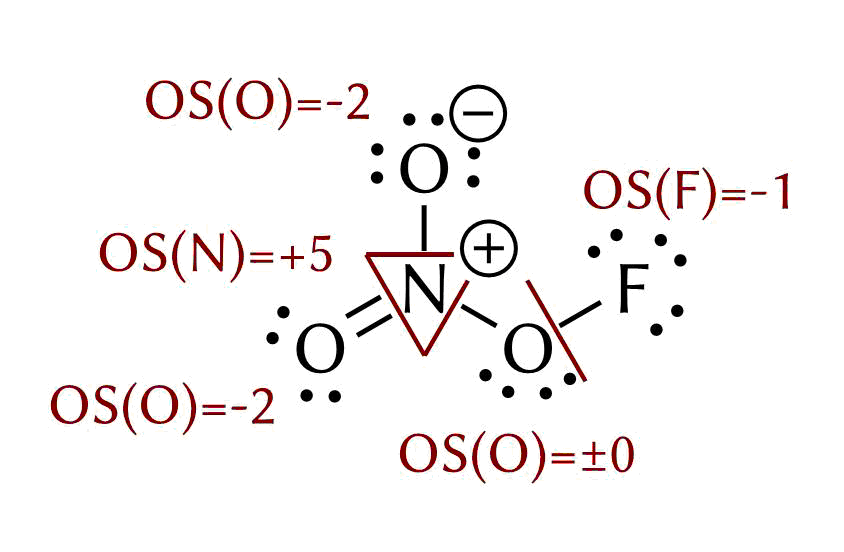 Contrary to that are the pre-2016 rules by the IUPAC according to the gold book (via the Internet Archive):

A measure of the degree of oxidation of an atom in a substance. It is defined as the charge an atom might be imagined to have when electrons are counted according to an agreed-upon set of rules:

You can already see that there is a problem in these rules since they are not definitive. The keyword here is most in bullet 3. They are at least incomplete since there is no mentioning of other elements than oxygen and hydrogen.

This will obviously lead to contradictory results. According to the deprecated rules we need to give oxygen an oxidation state of $\text{OS}(\ce{O})=-2$ in $\ce{NO3F}$. This will give us a total of $6$ electrons that need to come from the other elements. Since nitrogen only has five valence electrons, anything larger than $\text{OS}(\ce{N})=+5$ does not make any sense. Unfortunately that leaves one electron, which can only come from fluoride, i.e. $\text{OS}(\ce{F})=\color{red}{+1}$. It is obviously ridiculous that the most electronegative element has a higher oxidation state than one with a lower electronegativity. This is also in no way an accurate representation of the charge distribution in the molecule. 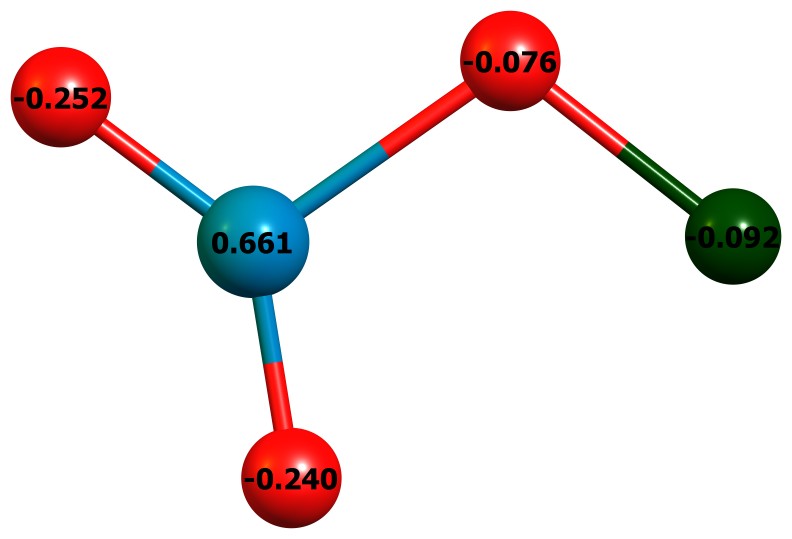 The above image shows the (NPA) charges of the molecule calculated on the DF-BP86/def2-SVP level of theory. It clearly shows, that fluoride is not positively charged.

One really has to understand that an oxidation state of $+1$ for fuorine does not make any physical sense, and that this set of rules is insufficient. Thankfully this has been addressed in the new definition, which is not perfect, but at least complete.

Oxidation state and electronegetivity are quite related.

The fluorine is the most electronegetive element in the periodic table that's why it is given a permanent oxidation state of -1 (0 when it is in elemental form).Since I consider my books and resources trustable I will say that in FNO3 fluorine still have an O.S of -1 (remember the electronegetivity concept).

Not the answer you're looking for? Browse other questions tagged inorganic-chemistry oxidation-state covalent-compounds or ask your own question.