Conversion of 1,2-dione to a 7 membered oxepane?

Has anyone heard of forming a seven membered ring from the rearrangement of a 1,2-dione? What I am talking about specifically is benzil rearrangement:

Could anyone give me guidance for how on earth something like this would form?

By this late date Coherent has probably resolved the structure of his product (9). From the limited information provided, it appears that a photolysis of benzil (1) was conducted in hydroxylic solvent (methanol?). Let's assume for the sake of argument that the product has the structure that Coherent has proposed. Coherent asks, how can it (9) be formed? First of all, hydroxyl radicals need not be invoked. Structure 2 represents an excited state of benzil that may cyclize to diradical 3 whose resonance structure is diradical 4. Rearomatization of 4 provides enol 5, tautomerization of which affords 2-phenylbenzofuran-3-one (6). Now the reorganization 4 --> 5 need not be intramolecular as indicated (red hydrogen) but intermolecular or, less likely, via the solvent acting as a source of hydrogen atoms (methanol C-H bond DHo = 96 kcal/mol. Probably too strong a C-H bond to deliver a hydrogen atom to stabilized radicals).

Benzofuranone 6 is a known compound. If benzofuranone 6 is truly formed in the reaction sequence, it should independently afford the final product 9 upon irradiation conditions. Cleavage of benzofuranone 6 by the Norrish type I mechanism leads to diradical 7, which may recyclize to 8 and subsequently rearomatize to 9. [I am not overly excited about going from a 5-membered to a 7-membered ring, but then again who knows.]

Finally, compound 9 should be able to be synthesized from O-benzylsalicylic acid by intramolecular acylation. 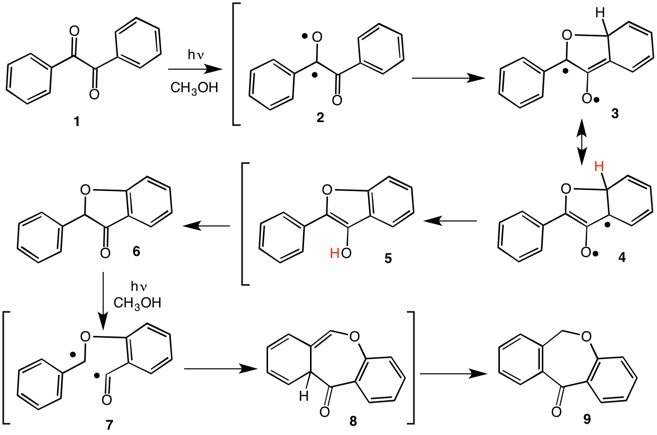 Not the answer you're looking for? Browse other questions tagged organic-chemistry reaction-mechanism photochemistry or ask your own question.