I'm not able to figure out the mechanism for this reaction. I don't see how sodium iodide in acetone could lead to rearrangement, and surprisingly ring opening!

What is this reaction called, if it has a special name? How does it occur?

P.S. In general, as far as I know, sodium iodide in acetone promotes excellent SN2 substitution, so all bromine atoms should be replaced by iodine. After this, because 1,2-diodo compounds (vicinal di-iodides) are unstable, elimination takes place (removal of iodine) and formation of alkene occurs (that's what I've seen happen, usually).

$\ce{NaI}$ in acetone is the reagent used for Finkelstein reaction which is nothing but a standard substitution reaction with $\ce{I-}$ ions. But in presence of vicinal dibromides, or any special structure where there is a chance of elimination of hallide ions even further, the iodide ions can actually make the molecule undergo preferably an $E_2$ elimination (in most of the cases).

In this starting compound also, there are substitutable $\ce{Br}$ atoms present. So, the iodide ions first performs a substitution reaction, and then undergo an elimination via bond migration. This same procedure occurs for two times. and finally we are left with a product which has $\ce{Br}$ atoms attached to $sp^2$ carbon atoms, and therefore they are highly reluctant to undergo any substitution or elimination reaction. So, that's why, logically the end product should be, $\text{ (1E,3Z,5E,7E,9Z,11E)-2,5,8,11-tetrabromo-6a,12a-dihydrooctalene}$. Here is the structure of the possible end product. 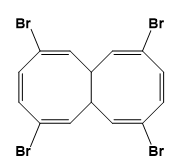 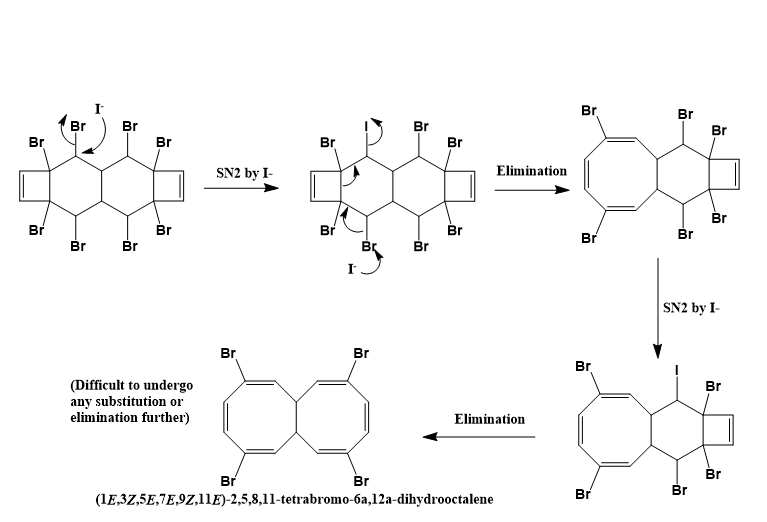 As far as I see, there can not be any more further reaction to the final compound. According to me, the given compound in the picture should not be the final product if we take the starting material to be the correct one. Instead, the end product in the mechanism should be the one produced with higher yield at the end.

Not the answer you're looking for? Browse other questions tagged organic-chemistry reaction-mechanism hydrocarbons nucleophilic-substitution elimination or ask your own question.