What is the major product formed when 3-methyloctane-2,7-dione is treated with sodium hydroxide?

My main issue is where the base deprotonates. Two enolates are possible (I neglected the other two because upon cyclisation, they form seven-membered rings which are less stable than the five-membered rings otherwise formed). Enolate 2 should be more stable than enolate 1 due to the greater degree of substitution:

However, these two enolates lead to different products. So, which product should be formed? I know that if a strong base like LDA was used, a proton will be abstracted from one of the less hindered terminal carbons. But hydroxide ion is small and should be able to abstract more hindered protons.

For the enolates that can be formed, the others have already given comprehensive answers: All four enolates are possible and since we are under thermodynamic control (weak base), we expect o observe them all. Numbering the chain carbons according to IUPAC, and noting the non-carbonyl end of the enolate, I expect the enolate ratio to be $3>6>1\approx 8$.

But your question asked for the reaction’s major product. First of all, the two terminal enolates (carbons 1 and 8) are to be dismissed: The seven-membered ring is much less stable. Then, the reaction mechanism shows us which enolate leads to a thermodynamically much more stable product than the other: 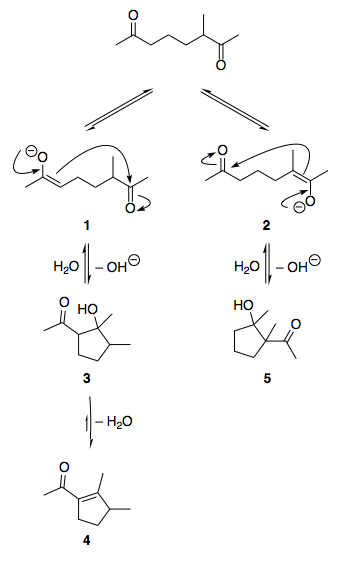 The more stable enolate 2 unfortunately cyclises to give a β-hydroxyketone 5 which has a quarternary carbon between the ketone and the newly-formed hydroxy group. No elimination is possible here. The other enolate aldol product 3, however, can eliminate to the corresponding cyclopentene 4. This should likely be given as the reaction’s major product since all steps up to the elimination are reversible. (The elimination is, too, but it is still most stable.)

Indeed, Stork and Williard report that the cyclopentene 4 is obtained when 3-methyloctane-2,7-dione is refluxed with ethanolic KOH for 2 hours, although no yields are given as it is only mentioned in a footnote.[1]

To quote directly from Wikipedia:

In the deprotonation of an unsymmetrical ketone, the kinetic product is the enolate resulting from removal of the most accessible α-H while the thermodynamic product has the more highly substituted enolate moiety.

Enolate 2 in your question is therefore the most stable as it is the most highly substituted. However enolate 1 should not be completely written off, there are many examples of this kind of substitution of enolate doing thermodynamic aldol reactions. The two terminal enolates are, under these conditions, highly negligible, both due to the lack of stabilisation and also since they would react to form the seven-membered ring, as you point out.

Unlike enolates formed via LDA where enolisation is complete, thermodynamic enolates are in equilibrium with the carbonyl, hence there is also the possibility of getting some of enolate 1 forming and going on to snap into a five membered ring. However, as Jan points out, drawing both 5-rings there is a clear preference for formation of one product over the other.

Not the answer you're looking for? Browse other questions tagged organic-chemistry regioselectivity aldol-reaction or ask your own question.