How does molecular collision excites the electron?

The general rule is that you do not need to absorb the photon to excite an electron. What you need is to provide some portion of energy. It can be done by means of a photon which is absorbed by an atom, of course, but it is not the only way.

Alternatively, you could collide an atom with some other object and upon the collision some of the kinetic energy is converted into internal energy which is then redistributed by its components. One of the components of the internal energy is the electronic energy, so if enough kinetic energy is converted into this particular part of internal energy, an electron gets excited. This process is usually referred to as the collisional excitation. This is the process by which an electron in $\ce{He}$ atom is excited: $\ce{He}$ atom in its ground electronic state collides with an energetic electron which causes electron excitation. 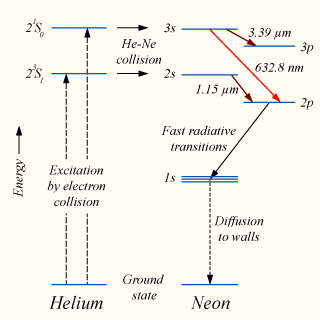 Disclaimer: I'm a professional chemist, not a physicist, so I might be wrong in what follows...

... but as far as I understand the matter at the microscopic level the energy is transferred by means of electromagnetic radiation the quantum of which is indeed photon. But do not think about this process as a photon being somehow "produced" in a form of a "billiard ball" by one atom, then transferred to another atom and finally magically "disappearing" here. This classical way of thinking is the root of confusion.

Before the energy transfer we have two systems each described by its own wave function. In order for the energy to be transferred the systems should start to interact with each other, but once they do so they become entangled and we do not even longer have separate systems. Rather, we have a big composite system described by its own wave function. After the interaction we again can speak about the individual systems each of which is again in own quantum state, though, the final state of each system is different from the starting one due to energy transfer. And in order to predict the final state of both systems (to be more precise, the probabilities of all possible final states) one could use the rules of quantum mechanics.

5
Energy of photons emitted by de-excitation of electrons
11
What happens when an electron in a metal is excited?
1
What is the relationship between emission and fluorescence?
3
Restrictions on transitions in Spectroscopy
0
How does increasing temperature reduce the efficiency of solar cells?
3
Electron Ionization and the Franck-Condon Diagram: vibrationally excited and vibrationally ground states
3
Photodissociated iodine laser and population inversion
5
How can a hydrogen atom ever emit an X-ray photon?