I am currently studying Mass Spectrometry: A Textbook, third edition, by Jürgen H. Gross. On page 41, the author says the following:

As explained by the Franck-Condon diagram, hardly any molecular ions will be generated in their vibrational ground state. Instead, the majority of the ions created by EI is vibrationally excited and many of them are well above the dissociation energy level, the source of this energy being the 70 eV electrons.

On page 37, the author presented the following Franck-Condon diagram: 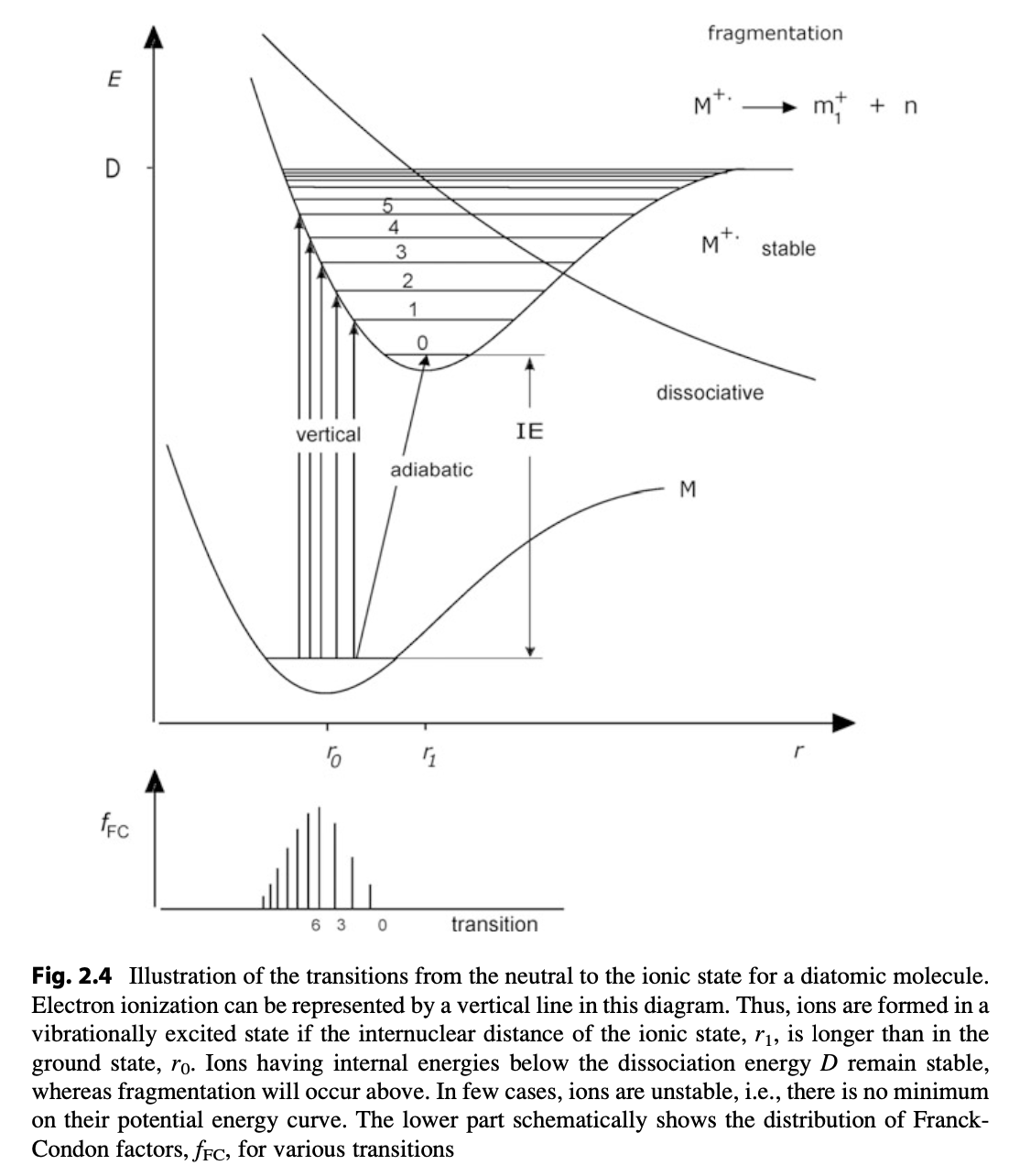 My understanding is that the vertical transitions represent the electron ionization of the neutral $M$.

Following this diagram, on page 38 the author said the following:

If my interpretation so far is correct, then two related questions immediately follow:

I'm studying this from a non-chemistry background, so I'd appreciate it if people would please take the time to explain this in a more novice-friendly way.

It's not so much about whether the bond length in $\ce{M^.+}$ is larger or smaller than that in $\ce{M}$; it's more about whether it's different. If you think pictorially about the vibration of a diatomic molecule or a spring, it makes sense that as you increase the energy (i.e. go to higher vibrational states), the amplitude of the vibration increases. The only way for a molecule to access bond lengths that are substantially different from its equilibrium bond length is therefore to be in a vibrational excited state.

Ionisation of $\ce{M}$ effectively always takes place from the vibrational ground state, so the initial bond length will always be very close to the equilibrium bond length of $\ce{M}$. If ionisation is almost instantaneous, such that the bond length cannot change during the ionisation, then $\ce{M^.+}$ is going to be generated with a bond length that is far away from its own equilibrium. This corresponds to an excited vibrational state. Whether it's larger or smaller than equilibrium doesn't matter; it just matters that it's different.

I suspect that the FC principle is no longer relevant to the adiabatic ionisation process. Adiabatic processes are associated with "slow" transitions: see e.g. https://en.wikipedia.org/wiki/Adiabatic_theorem, whereas the FC principle is to do with "instantaneous" processes where there is no possibility of the bond length changing during the ionisation.

This is not my area of expertise, but I will go out on a limb and say that the adiabatic ionisation process is largely hypothetical (at least in the present context). Wikipedia writes that

However, due to experimental limitations, the adiabatic ionization energy is often difficult to determine, whereas the vertical detachment energy is easily identifiable and measurable.

So I would not interpret this as being two different physical processes that actually occur in the mass spectrometer; rather, it seems to be more of a thought experiment to me. Of course, I am open to being corrected on this.

The reasons for the change in internuclear separation and the imporance of the Franck-Condon factors, as has been clearly pointed out in answers and comments. The FC factors determine the strengths of transitions from $M$ to $M^{+.}$ and to clarify this figure below shows a simple calculation based on harmonic oscillator wavefunctions of the effect of displacement on the spectrum produced. 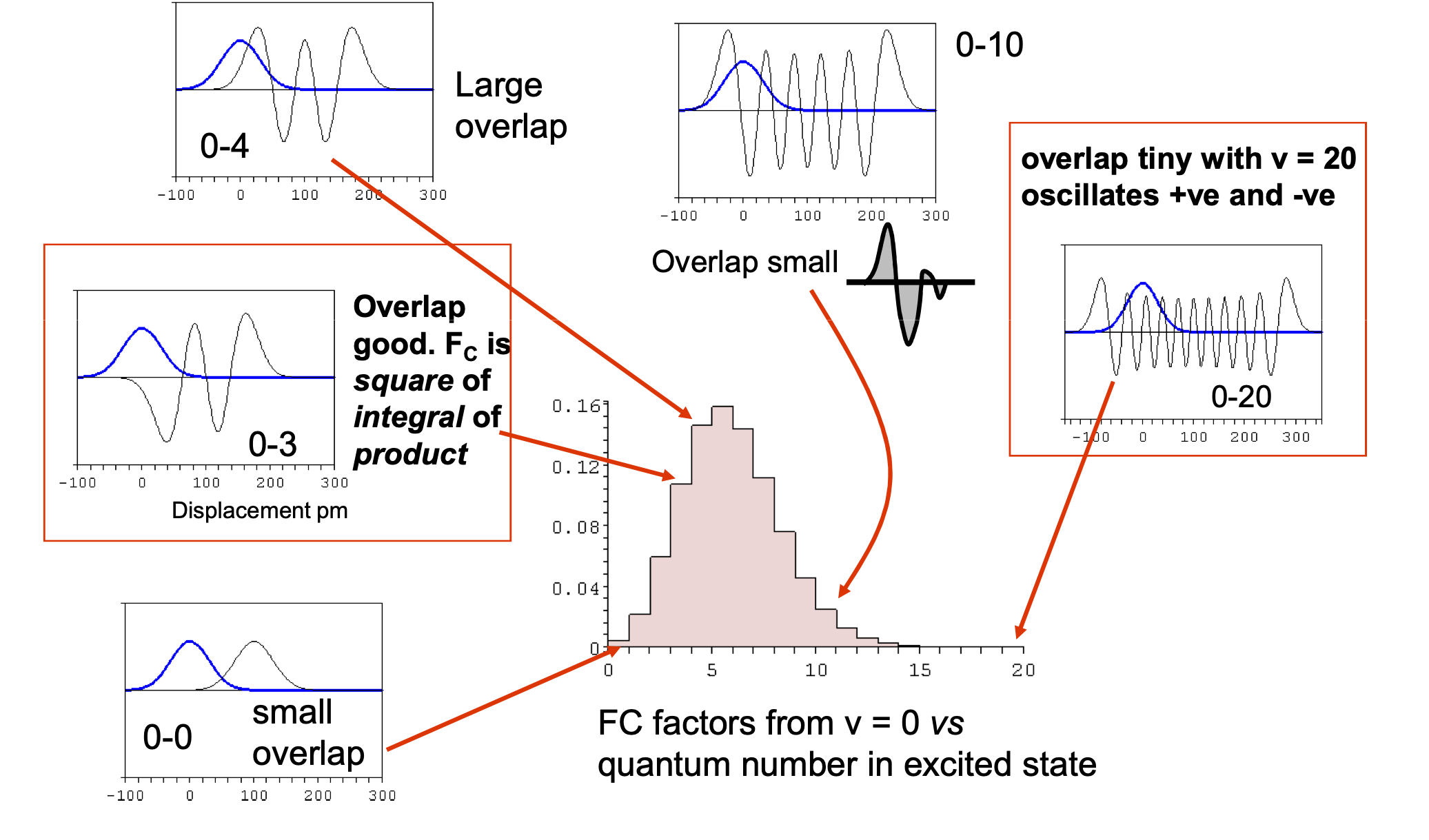 The FC factors with vibrational wavefunctions $\varphi$ are defined as $\displaystyle F=\left |\int \varphi_n^*(R-R_n)\varphi_m(R-R_m) \right|^2$ where $R$ is bond extension and $R_n,R_m$ equilibrium values. In the case of harmonic oscillator transitions from the ground state vibrational level on the lower (ground) electronic state to a higher electronic state is $\displaystyle F_{0,n}=\frac{x^n}{2^nn!}e^{-X/2}$ where the displacement parameter $X=\mu\omega(R_n-R_m)^2/\hbar$ with reduced mass $\mu$ and frequency $\omega$. 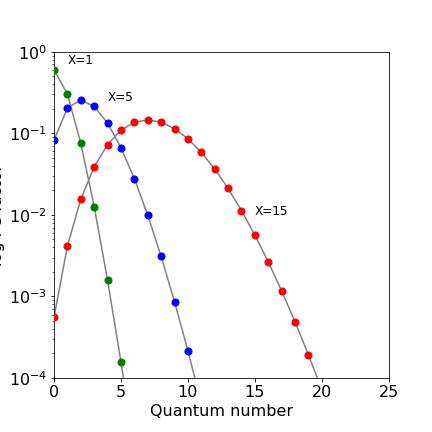 The use of the word 'adiabatic' is strange here as the 0-0 transition will occur with a small or large probability, as determined by the FC factor; if small it might be 1000 times less intense than the most intense transition. Usually the term refers to situations when there is a interaction between potential energy surfaces that causes them to move apart (avoid one another or repel one another) in the adiabatic picture. This is the usual case that we draw for an energy profile leading to a transition state 'at the top of the hill'. The wavefunction then changes smoothly from that of reactant to product. This is not usually what happens in an optical transition as the interaction between states is minute in the absence of the photon. Thus to cause a adiabatic change, as shown in your picture, the two state have to be caused to mix at the position of the minimum of the $M^{+.}$ state which presumably means starting with energy high up in the ground state and using a photon to reach the minimum in the higher state but this is a lot like a normal transition. Alternatively a short pulse could be used, say 10 femtosec long, to couple the two states , and while they are in superposition ( about 10 fs before they de-phase) somehow to cause the transition to occur with a second pulse.

Not the answer you're looking for? Browse other questions tagged physical-chemistry quantum-chemistry analytical-chemistry ions ionization-energy or ask your own question.

21
What is a virtual state?
2
How can the ground state electron configuration for a d3 complex correspond to an F term symbol?
4
Potential wells and symmetry in absorption spectroscopy
3
Charge-transfer absorption complex - solvent sensitivity
5
What drives vibrational cooling in an excited stated?
5
Why does calcium emit circularly polarized light?