Energy of photons emitted by de-excitation of electrons

When an electron of an atom returns from an excited state to the ground state, it emits energy in the form of a photon. How does the change in energy level compare to the energy of the emitted photon?

When an electron of an atom returns from an excited state to the ground state, it emits energy in the form of a photon.

That is one of several pathways for deexcitation. Often, internal conversion, the radiationless deeexcitation happens instead.

How does the change in energy level compare to the energy of the emitted photon?

It depends on the relaxed geometry of the excited state, as compared to the ground state.

Remember that the excitation happens on a femtosecond scale. That is amazingly fast, light travels a distance of just $\mathrm{0.3\,\mu m}$ in $\mathrm{1\,fs}$.

Since it takes longer than some femtoseconds to move the much heavier nuclei, the molecule in its electronically excited state still has the geometry of the ground state. This can be far from the lowest vibrational level (the relaxed geometry) of the excited state.

Before emission of a photon occurs, ectronically excited molecules relax and adopt their lowest vibrational state.

This means that the energy of the emitted photon often is (much) lower than the excitation energy. This effect is known as Stokes shift. 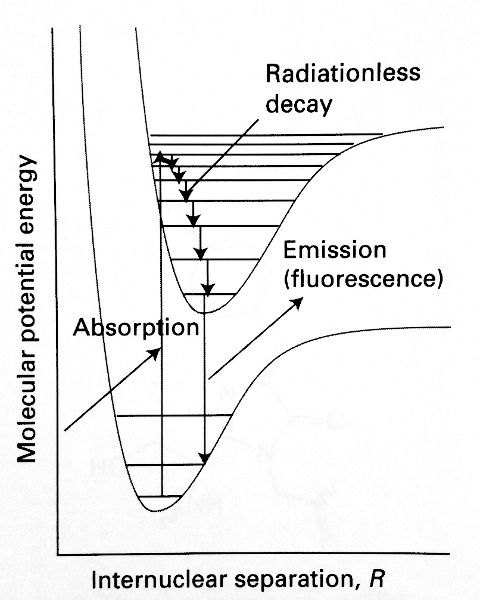 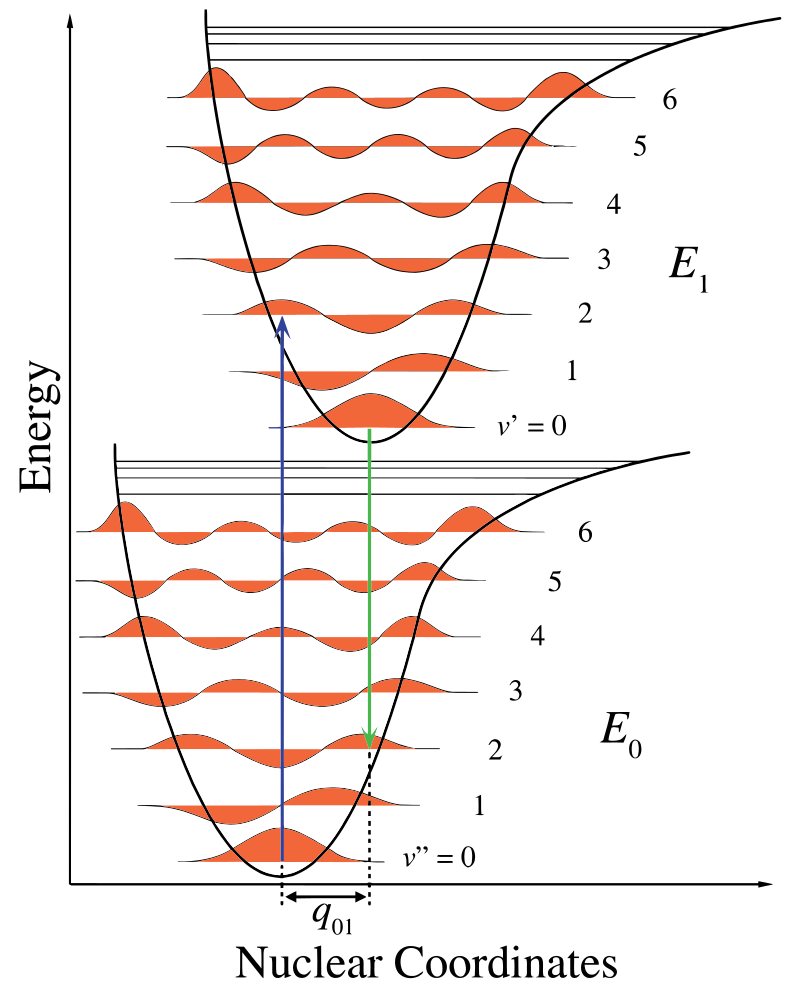 So that is why the emitted wavelength is longer than the excitation wavelength; it is due to vibrational relaxation occurring due to the vibronic transition. The Franck-Condon principle gives a way to predict the vibrational transition based on the vibrational wave-function overlaps in the initial and final state.

When an electron de-excites from a higher energy orbital to a lower energy orbital it loses energy by emitting a photon. Since energy must be conserved, the energy of this photon is equal to the amount of energy the electron has lost, or in other words the difference in energy of the two orbitals involved. The frequency of the photon can then be calculated using $E=hf$ where $h$ is Planck's constant and has a value of $\mathrm{6.626\times10^{-34}~J~s}$.

Not the answer you're looking for? Browse other questions tagged energy electrons electronic-configuration photochemistry or ask your own question.

2
X-ray fluorescence: where do expelled electrons go?
12
Why is absorbance spectrum continuous and not quantized?
6
How does molecular collision excites the electron?
3
De-excitation of a molecule
1
What is the maximum number of emission lines when the excited electron of a H atom in n = 6 drops to ground state?
0
Deducing the shell when transition occurs such that two photons are discharged