The bond in coordination complexes

This is a very basic question and I'm surprised it only just struck me. The nature of the bond in coordination complexes is a coordinate covalent bond. Only the ligand donates electrons for bond formation between the metal and ligand.

In a typical covalent bond, such as is found between carbon and hydrogen in methane, each atom is considered to contribute one electron to the two-electron, two-centre bond which is formed. The metal-ligand bond is often envisaged as a second type of covalent bond in which we still have a two-centre, two-electron bond, but where both of the electrons come from one of the atoms or from a molecule. This type of bond is known variously as a coordination, a dative covalent or a donor-acceptor bond.

It was recognized early on that the formality of dative covalency in coordination compounds presents some difficulties. Many inorganic compounds are conveniently thought of as ionic salts in which there is an essentially complete charge separation between cationic and anionic species. Compounds of the group 1 and group 2 metals tend to be readily categorized as ionic. Dissolution of a salt of a group 1 or a group 2 metal results in the formation of solutions containing solvated cations and anions - only in concentrated solutions are there significant cation-anion interactions beyond simple ion-pairing. However, the ionic model does not appear to be suitable for the description of the properties of many transition-metal compounds. For example, the compound $\ce{K4[Fe(CN)6]}$ dissolves in water to give solutions containing solvated potassium ions and the $\ce{[Fe(CN)6]^{4-}}$ ion, rather than solvated potassium, iron(II) and cyanide ions. The interactions between the cyanide and the iron(II) centre appear to result in longer lived species than result from simple electrostatic interactions of the type observed in sodium chloride. This is, of course, the sort of argument which led to the development of the description of coordination compounds in terms of donor-acceptor interactions between the ligands and the metal centre. Let's have a look at the consequences of the formation of a donor-acceptor bond in a little more detail. If the donor-acceptor bond is completely covalent, then there is a net transfer of one unit of charge from the donor to the acceptor as a direct consequence of the equal sharing of the electron pair between the two centres. This result leaves a positive charge on the donor atom and a negative charge on the acceptor atom. The limiting ionic and covalent descriptions of a complex cation such as $\ce{[Fe(H2O)6]^{3+}}$ are shown below.

As commented above 'ionic' structures are not in accord with the chemical properties of coordination compounds. However, there are also a number of objections to the covalent description. The charge distribution is such that the iron(III) centre bears a three minus charge, whereas the oxygen atoms of the water ligands each bear a single positive charge. This would be unrealistic in view of the electronegativities of these elements ($\ce{Fe}$, 1.8; $\ce{O}$, 3.5), which predict that the $\ce{Fe-O}$ bond should be polarized in the sense $\ce{Fe^{\delta +}-O^{\delta -}}$. The problem was addressed by Pauling, who recognized that, in reality, it was not appropriate to describe most bonds as being purely 'ionic' or purely 'covalent'. He developed a description of the bonding between a metal and its ligands which included considerable ionic character in the metal-ligand bonds within a basically covalent regime. In order to determine the amount of ionic character within a given metal-ligand bond, Pauling framed his electroneutrality principle. In this, he opined that the actual distribution of charges within a molecule is such that charges on any single atom are within the range -1 to +1. It can be seen how this works by reconsidering the ion $\ce{[Fe(H2O)6]^{3+}}$. An ionic description results in a +3 charge on the metal centre, whilst a covalent description gives the metal a -3 charge. Now the electroneutrality principle suggests that the ideal charge on the metal centre is zero. That would be achieved if the iron centre gains a total of three electrons from the six oxygen donor atoms; in other words, if each oxygen loses one half of an electron rather than the whole electron which the fully covalent model demands. Pauling describes this situation as 50% covalent (or 50% ionic). 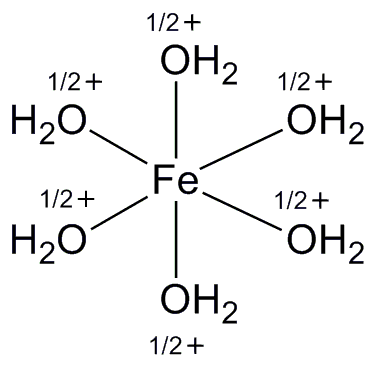 Pauling's model gives a good indication that the bonding situation in transition metal complexes is rather complex since the bonds are highly polarized (An 'accurate' view of the bonding in transition metal complexes can only be gained by more sophisticated methods such as the molecular orbital method). Thus, Lewis structures are not particularly well suited to depict the bonding situation in coordination compounds because Lewis structures are intended for covalent compounds only.

Not the answer you're looking for? Browse other questions tagged inorganic-chemistry coordination-compounds bond or ask your own question.

6
Is there any way of representing a dative/coordinate covalent bond?
2
Bonding between rings and iron atom in ferrocene
7
Limitations of Lewis structures
4
Metal coordination in enzymes: What type and number of bonds form between amino acid residues and Fe(II)?
2
Clarifying the concept of the dative covalent bond
1
Is ammonium ion a positive ligand? If yes, please explain how does it coordinate with metal