Bonding between rings and iron atom in ferrocene

How are the 10 vertical bonds in Ferrocene (sandwich structure) connected, by what type of bonds? 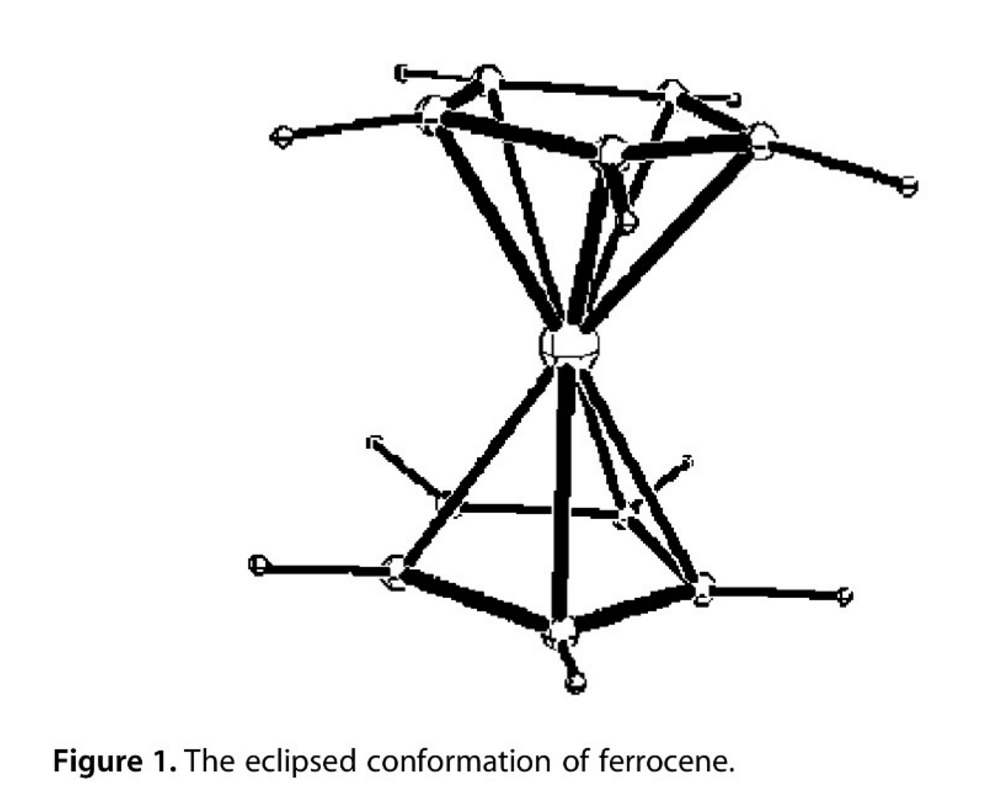 What is the real structure of ferrocene? Concerning the 10 vertical extra long bonds?

The "real" structure of ferrocene is an iron atom sandwiched between two flat, parallel, pentagonal C5H5 rings. The diagram above shows the atomic positions from a crystal structure but the bonds are merely a convenience and don't accurately summarize the way the bonding works though the picture does accurately summarize the atomic positions in the crystal structure.

The real bonding requires some understanding of molecular orbital theory and how the d-orbitals of iron interact with the delocalized pi-orbitals in the unsaturated ring. Some pictures of the orbitals contributing to the bonding are shown here.

Ferrocene creates some flurry of new thinking about bonding theory. Observations, for example, show the rings rotate easily in the plane of the rings and this very clearly shows that any picture with 10 sigma bonds is not a good explanation for the overall structure. Plus the chemical reactivity is far more similar to benzene than to an unsaturated system which, again, implies it isn't all sigma bonds.

The pictures we use can inspire questions that are more complicated than they have to be. I like the hamburger picture of ferrocene: 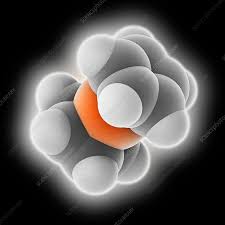 OK, there are some people who like a picture of electron lobes: 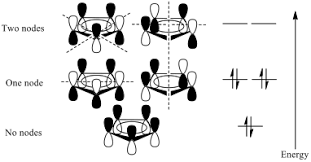 The use of points (atoms) and lines (bonds) connecting them distorts the filled-space reality of the actual molecule. Counting out 10 Fe-C bonds doesn't suggest the best explanation of the bonding. Of course, when you look at the filled-space models, you can't see exact bond lengths and angles, but it may give you a better idea of atoms fitting together, with molecular orbitals providing some sort of glue.

Since the OP is talking about a VB-based approach to describing the bonding in ferrocene, I'm going to ignore any purely MO-based tactics in this answer.

By now, the iron has 10 (6 from the itself, 2 each from the two bonds) valence electrons near itself. But wait- iron wants 18 electrons so it can be like krypton. Luckily, there are exactly 8 more electrons total nearby- the total of 4 pi-bonds of the two cyclopentadienide rings. Each pi-bond turns into a 3-center-2-elctron bond.

By now, there are 4 bonds near each of the 8 carbons (one C-H, two C-C sigma and one C-C-Fe 3c-2e) with no lone pairs, and 6 bonds near the iron (two C-Fe 2c-2e each, and four C-C-Fe 3c-2e each) with three lone pairs. Since (4 times 2) means octet and (6 times 2) + (3 times 2) means decaoctet, everybody is happy. Note that, since nobody has a formal charge here(dative bonds do not affect formal charge), this resonance canonical satisfies the Pauling rule of electroneutrality. In short, there are two 2c-2e carbon-iron bonds and four 3c-2e carbon-carbon-iron bonds.

Now, there initially are two cyclopentadienide anions, and the lone pair on each ring can reside on any of the five constituent carbon atoms of the ring. Therefore, there are 25 such canonicals, the combination of which constitutes the majority of the ferrocene molecule.

Explaining the pi-backbonding in the ferrocene molecule using VB theory is more complicated, but it can be intuitively understood by the following scheme: starting from a resonance canonical described above, a lone pair on the iron, and a 3c-2e bond involving both the iron and two or the carbons(total number of electrons involved : 4), magically rearrange to two iron-carbon bonds(total number of electrons involved here : 4).

Again, the two carbons and the iron each satisfy the octet/decaoctet, and again, the dative Fe->C bond does not change the zeroness of the formal charges here, and hence the results are also equally valid resonance canonicals(have to add an MO note here: since the Fe->C bond is dative, the oxidation numbers do not change even after the formal donation of the iron's electrons to the more electronegative carbon).

All of this is an explanation purely in basic VB theory. In modern VB theory, this slightly fails. For example, NBO calculations appear to indicate that there is one half-filled "lone pair" on each cyclopentadienyl ring and no bonds between the ring carbons and the iron, and with the two remaining electrons being used up as parts of partially-filled "lone pair"s of antibonding character on the central iron atom. However, since ferrocene must contain at least one N-center-2-electron bond, it is likely that the intuitive approach above matches the purely VB-model of the bonding in ferrocene more than the NBO calculations do.

Not the answer you're looking for? Browse other questions tagged bond organometallic-compounds or ask your own question.

15
The bond in coordination complexes
9
How to you show a 3-center 2-electron bond in a Lewis structure?
5
Benzene as a pi-acceptor?

4
What is the difference between cross-linked bond and secondary bond in polymers?
11
How does localized bonding theory and hybridisation work?
2
How can a chemical structure be stored in a matrix?
2
Comparing the bond strength between a polar bond and non-polar bond
6
Why do aromatic compounds have an upfield shift upon coordination to metals?
2
Reason for double acylation of ferrocene only occurring with certain reagent combinations
8
Can ferrocene type sandwich compounds be made with fluorene?
0
Why are the hydrogen-carbon bonds bent in a graphical depiction of an alkene, but are straight horizontally and vertically in an alkane?