Why doesn't 4 hydrogen and 1 carbon form a ionic bond? What is the limit of electrons that can be given away?

I understand that it's a covalent bond, but to my uneducated mind isn't it possible to have the carbon give 1 electron to each of the hydrogens and form an ionic bond instead? I read this response

which kind of makes sense, which leads me to my main question. Is there a limit to how many electrons(in this case) a carbon can drop/give before it's not possible? Does it depend on how badly the other(s) elements want to take/give electrons in said reaction?

As in, it has to give up 4 electrons, would it be fine it if had to give up 2? etc, hopefully my question makes sense.

I can understand your reasoning. But we need to consider many factors. When a compound is to be formed it should be stable enough. Or else the compound breaks down. Here the electronegativity of Carbon is 2.55 and Hydrogen is 2.2 (According to Pauling's scale). So the electronegativity difference between these two atoms is 0.35. In the table given below..., 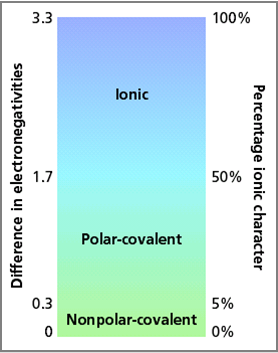 While for removing successive hydrogen atoms from methane the bond-dissociation energies are 104 kcal/mol (435 kJ/mol) for D(CH3–H), 106 kcal/mol (444 kJ/mol) for D(CH2–H), 106 kcal/mol (444 kJ/mol) for D(CH–H) and finally 81 kcal/mol (339 kJ/mol) for D(C–H). The bond energy is, thus, 99 kcal/mol or 414 kJ/mol (the average of the bond-dissociation energies). Here the formation of methane is exothermic and is spontaneous while in the above situation it highly endothermic. All these factors give us why C-H bond is covalent but not ionic. Also you can do the same for either two bonds or three bonds anything. So we can say that $\ce{CH4}$ is covalent and cannot be ionic. And two bonds also cannot be ionic.

But in October 2016, astronomers reported that the very basic chemical ingredients of life—the carbon-hydrogen molecule (CH, or methylidyne radical), the carbon-hydrogen positive ion (CH+) and the carbon ion (C+)—are the result, in large part, of ultraviolet light from stars, rather than in other ways, such as the result of turbulent events related to supernovae and young stars, as thought earlier. So we can say these ions are in existence in our universe.

I hope it helps you.
I'm new to Stackoverflow so sorry if I've made any mistake in giving your desired answer .

I think I understood your question.

In case of ionic bonding, an electron is "lost" by the one atom and gained by the other atom. So, it depends on how badly electrons are wanted or not wanted - quantified by electronegativity. More the difference in electronegativity, higher the ionic nature of the bond.

In case of covalent bonding, no atom wants electrons to be "lost". So, instead of absolute "give and take", they share. This is what happens in case of $\ce{CH4}$ as well.

Not the answer you're looking for? Browse other questions tagged bond ions or ask your own question.

2
Why does sodium require energy to ionize?
4
How is the charge of covalently bonded atoms determined?
19
Why is an ionic bond a chemical and not a physical bond?
13
Is an ionic bond more like a covalent bond or an intermolecular force?
3
Why does magnesium form covalent bonds with carbon?
1
Ions and Ionic Bonds