Why does sodium require energy to ionize?

If you look at $\ce{Na}$, it has a very low ionization energy, but the question is, why does it have an ionization energy at all? If it can get to the electronic configuration of $\ce{Ne}$, by losing an electron, which is a very stable configuration, then it should release energy. Consider the analogy to gravitational potential energy, you can consider $\ce{Na}$ to be analogous to standing on a very high ledge. And $\ce{Na^+}$, is the position at the ground. Obviously, getting to the ground is much more stable. And if I jump down from the ledge I convert my potential energy to kinetic energy and ultimately to heat, thus releasing energy. Why does sodium require energy to ionize? 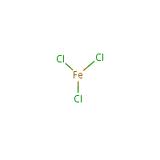 Why does iron form this bond? I mean, it makes sense from chlorine's point of view to share an electron with iron. All the chlorines have a full outer shell. But what about iron? It had $2$ valence electrons, now it has $5$. It would make much more sense for iron to bond with chlorine to form $\ce{FeCl_6}$, since then it, too would have a full outer shell. Or, $\ce{Fe}$ could give away its $2$ electrons to $2$ chlorines and form ionic bonds. Why does this not happen?

Why does sodium have an ionization energy?

Since electrons are negatively charged and nuclei (owing to the presence of protons) are positively charged, electrons will typically be drawn to the nucleus. The situation gets a bit more complicated by (a) the quantum nature of energy and (b) the presence of other electrons. Complication (a) is the reason why electrons do not behave like planets orbiting the sun because if they did the electron would eventually be pulled in to the nucleus. (More details probably requires a different question.) The second complication is more relevant to your question, because additional electrons will both repel the electron we are trying to eject through ionization and also shield some of the positive charge of the nucleus. (Think about wearing sunglasses; they don't make the sun less bright, they just make less light reach your eyes.)

Your comparison of Na to that of an object on a cliff is not correct; the sunglasses analogy I used above is better (although it's flawed as well). The reason why sodium, or any other atom/ion for that matter, has an ionization energy is because it requires energy to separate two oppositely charged particles. The attraction may be weak, as it is in sodium, but it is still non-zero.

First, it is a good idea to look at the wikipedia page for iron(III) chloride, which shows that the molecule actually binds in an octahedral fashion, where two additional chlorides from neighboring molecules bind in a bridging fashion. This is a type of bonding that is typically not discussed until one's third year of chemistry education. Valence shell electron counting works really well for identifying "stable" electron configurations of ions and covalent molecules made out of lighter elements (C, N, O, for example). The presence of d-orbitals, plus the ionic nature of the interaction between Fe(III) and chloride ions, plus the Lewis acid/base concepts that do a better job at describing and rationalizing bonding in transition metal complexes, makes the concept of valence electrons not the best model to explain bonding in $\ce{FeCl3}$.

Without access to molecular orbital theory, it is perhaps best to explain the bonding in iron(III) chloride from a strictly ionic bond nature. Fe(III) is a +3 cation and therefore requires three -1 anions to balance the charge.

Not the answer you're looking for? Browse other questions tagged ions bond or ask your own question.