How can we tell the particle size of solutes in solutions?

This is a general question in regard to solutes dissolving into solvents. I am interested in the reality of the particle size of the solute during dissolution.

For example, take $\ce{NaCl}$ and dissolve it into water. Are the salt particles, which are now invisible to the eye, truly dissolved? Meaning have they turned into single atom particles of $\ce{Na+}$ and $\ce{Cl-}$ clinging to $\ce{H2O}$ water structures?

Chemical equations seem to imply this. However, when you look at colloids, then particle size matters and can vary. Do ionic salts still have large clusters of their cations/anions upon dissolution?

I am really interested in this topic and would love someone to give me a good explanation.

I assure you there are many reasons to believe that the ions really are solvated individually. The first thing to look at is the relative strength of interactions between the ions in a lattice and the ions when in a solution. For water, these interactions must be very strong because a number of hydrogen bonds must be broken, the interaction between ion and water must overcome this initial deficit and the loss of some entropy. So, the interaction is surely quite strong.

It is of course possible for two ions which dissolve to get back together and interact with each other. They are oppositely charged ions after all. By looking at the relative size of equilibrium constants for these two processes, however, I think you'll be convinced it is far preferable for the ions to be solvated. For instance, a quick google search will tell you that the $K_{sp}$ of $\ce{NaCl}$ is around $36$. That's an astronomically large solubility product. This means we dump sodium chloride into water until the concentration of both ions is around $6\ M$.

Thus, the easiest experiment to do is to just saturate a solution of water with salt and write the mass of salt added in molarity units. This doesn't really answer your question though because we assumed that the salt existed as two ions and then made a correspondence between that concentration of ions and the concentration of water which each ion is occupying. Plus, we would generally be interested in more dilute solutions than this.

This is why people have used methods which probe the structure of ions in a solution directly. Namely, using x-ray diffraction and neutron scattering experiments, it is possible to determine the local environment around water (or something else solvating an ion) and calculate the hydration number. This is the number of ions, of a specific ion, solvated per molecule of solvent.

Here is also an old review which describes many simple but outdated methods for determining the solvation/hydration numbers of ions in a solvent.

Hopefully some of this is helpful and convincing. The experiments are quite definitive, but if you believe the equilibrium constants, then it is very hard to believe these lattices would remain intact in solution.

Using your example of $\ce{NaCl}$, yes, upon dissolution into water the solid is broken down into individual $\ce{Na+}$ and $\ce{Cl-}$ ions in a process called solvation. Each ion is surrounded by a solvation sphere, or solvation complex, of solvent molecules creating a more stable configuration than undissolved $\ce{NaCl}$ in the presence of water (up to the limit of solubility, about $\pu{260}$ g/L at room temperature).

The following image was taken from the Wikipedia article for solvation: 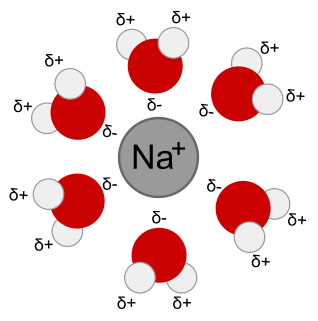 Here you can see that the positively charged sodium ion is surrounded by the electron-rich end of water molecules, creating a solvation spere (of course this is happening in 3 dimensions, thus a sphere). The same thing happens for the negatively charged chloride ions, except that the more electron-poor end of the water molecules are attracted to the ion.

Not the answer you're looking for? Browse other questions tagged aqueous-solution solubility solutions solvents or ask your own question.

1
Solutions, solvents and solutes
7
Gibbs Free Energy of Solutes and Solutions
7
Can I equalise osmotic pressure using two different solutes?
2
What solutes will give the largest reduction in volume when dissolved in water
1
How does the composition of a mixed solvent affect solubility?
0
Can I add the molarities of multiple solutes together?
4
How can I calculate the molar conductivity of a solution with multiple solutes?
1
Why does mixing two solutions decrease the concentration of the solutes?
0
Does PEO particle size decrease when dissolved in water?