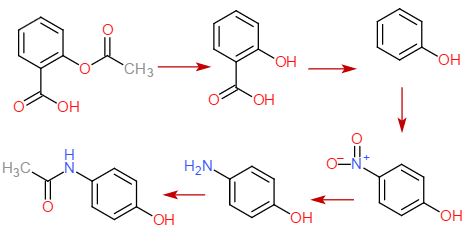 He performed the following steps:

As you can see, the yield is quite discouraging, particularly the nitration of phenol. The synthesis that he planned was quite linear, first removing functional groups and then adding them. This unfortunately did not take full advantage of the functional groups present.

I feel that this is a good opportunity to reflect how we can carry out the reaction efficiently, and I will illustrate it with the picture below: 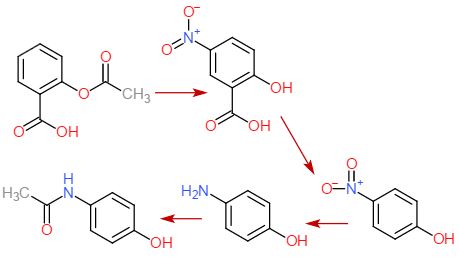 1) I feel that nitrating the aspirin directly would have been more effective. 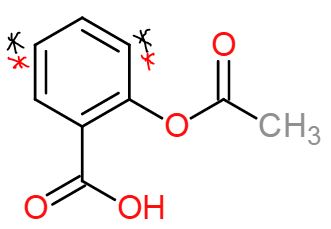 Since the carboxylic acid is 3-directing and the ester 2,4-directing, this would lead to two nitration positions as shown by the asterisks. However, the site to the left would be more ideal as the site to the right is blocked by steric hindrance from the bulky ester group. The combined efforts of both functional groups would also increase the reaction yield quite considerably. Since this is done in the presence of concentrated nitric acid and sulfuric acid, it is not surprising that a hydrolysis can occur here when we add water, thus allowing us to do a one-pot reaction.

2) Now, decarboxylation should be carried out. Due to the powerful electron-withdrawing nature of the nitro group, the $\ce{C\bond{-}C}$ bond should be weaker than the original synthesis, giving us a better yield as well. This is important as the close proximity of the two groups allows for intramolecular hydrogen bonding, thus making decarboxylation more difficult than usual.

I am wondering how much the yield would be affected if it were synthesised in this method. Of course, it is impossible to theoretically come up with a value and can only be done experimentally, but it would be good if I can come up with some estimates. Let me know what you guys think. Thanks!

You are absolutely correct that $6~\%$ yield is not acceptable for a synthesis — especially if it is a reaction as simple as the nitration of phenol. A quick search in SciFinder gives numerous reaction conditions that allow for up to $98~\%$ yield of the para-substituted product, depending on which catalysts and sets of conditions you want to use. One of the simplest sets of reagents is probably Ducry’s and Roberge’s Angewandte paper which, however, uses a microreactor. While their best selectivity is $1.2:1$, their yields are way above $12~\%$ (which would be the corresponding yield for $6~\%$ of the para-product in a $1:1$ mixture).[1]

Having an acetate group rather than a hydroxy group greatly modifies the properties of that particular oxygen atom. I synthesised a phenol and the corresponding acetate and the chemical shift of the ortho carbon changes by $7.5~\mathrm{ppm}$ upon acetylation while the meta carbon remains essentially unshifted. Therefore, I wish to challenge your assertion that acetate be ortho and para-directing — please back this with appropriate references. However, I will acknowledge that an acetate group is less meta-directing that a carboxylic acid; therefore the preferred reaction site should still be ortho/para to the acetate.

Whatever the selectivity, I do not agree that nitration of acetylsalicylic acid or salicylic acid would be more efficient than nitration of phenol. Remember that the reaction you are trying to perform is an electrophilic aromatic substitution $\mathrm{S_EAr}$. For an aromatic species to be attacked electrophilicly, it should have a high electron density. The carboxyl and acetate groups are both electron-withdrawing and therefore hinder the reaction. It should be harder and require harsher conditions to nitrate a benzoic acid than a phenol. The choice of steps is therefore better in the originally proposed way, in my opinion.

I will agree that decarboxylation of a meta-nitrobenzoic acid should be easier than of salicylic acid. Since the yield of carboxylation is already rather acceptable already, I do not think that switching the order would provide any significant advantage here.

Finally, it should also be rather easy to increase the yield of the final-step acetylation. $18~\%$ needs a lot of work.

Not the answer you're looking for? Browse other questions tagged organic-chemistry synthesis carbonyl-compounds phenols or ask your own question.

25
Electrophilic Aromatic Substitution: Are protonated OH-groups ortho-/para- or meta-directing?
4
Synthesis of synthetic detergent with Friedel Crafts Acylation
7
Why do nitro groups confer explosive tendencies?
2
Simpler synthesis?
4
Chemoselectivity in synthesis of paracetamol
5
Suggestion for a Synthesis of Paracetamol — plausible?
2
Can someone confirm and/or correct my logic regarding this mechanism?