I have to obtain 1-nitro-2,4,5-triaminobenzene from 1,3-dichlorobenzene. I have thought of:

I am dissatisfied with this synthesis, though. It is a bit too long and I feel like I miss something. I have also thought of nitration or aromatic nucleophilic substitutions with $\ce{NaNH2}$ as the first step of another possible synthesis, but I can't reach the end.

Is the synthesis I have thought of viable? Should I try sth different?

Thank you in advance.

LE: my bad, the target molecule is 1-nitro 2,4,5-triaminobenzene. Thank you orthocresol for pointing out a few things.

LLE: Thanks for your answer, Klaus, good work. You just gave me another idea for a synthesis! Even though there is something I don't like about it.

Thinking in the deactivating efffect of the nitro group in electrophilic aromatic substitution, running a nitration as one of the later steps in your synthesis makes sense.

Since you're not really pleased with the length of your current approach, let's think about something else.

Please note that this is just a mind game and I didn't really bother to check for the best reagents for each step!

Direct replacement of $\ce{Cl}$ in your starting material by $\ce{NH2}$ via nucleophilic aromatic substitution would be nice, but the condition are probably quite harsh.

Your starting material isn't really activated for that.

The situation might be different after nitration. 1,3-dichloro-substitution should furnish the right product.

Now, it is conceivable that at least the chloro substituent para to the nitro group can be replaced using sodium amide. With a bit of luck, the second one reacts too.

Treatment of the resulting 1-nitro-2,4-diaminobenzene with sulfuric acid might yield ring sulfonation (and turn the amines into sulfonamides).

A further reaction with sodium amide, followed by acidic workup, might eventually give the desired product. 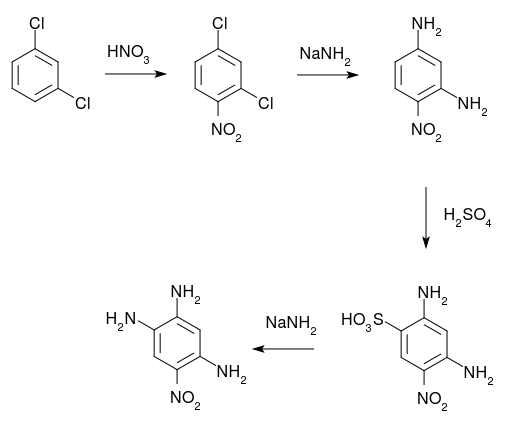 Again, this is just a mind game, I didn't bother to search for exact conditions and/or references!

Not the answer you're looking for? Browse other questions tagged organic-chemistry synthesis aromatic-compounds or ask your own question.