In the Pericyclic Reactions Oxford Primer it is written that:

the deuterium substitution of the hydrogen atoms in the diene and dienophile that participate in a possibly Diels-Alder reaction, gives rise to inverse secondary isotope effect (as the carbon atoms change from trigonal to tetrahedral geometry):

I don't understand the principle behind this. Why does the isotope effect occur and how does it tell us whether the mechanism is radical or pericyclic? I need an answer much more concise than what is presented in the book.

What Fleming is likely referring to is work by Edward Thornton (J. Am. Chem. Soc. 1972, 94, 1168) in which he attempted to make use of secondary kinetic isotope effects (KIE) to prove whether the Diels Alder reactions being studied were indeed pericyclic, or occurred via a radical pathway.*

The phrasing in your post (which I assume is from the book itself) isn't particularly helpful. By 'geometric', Thornton was actually talking about the geometric mean and the arithmetic mean as ways of considering the isotope effects.

The reaction they actually studied was the retro Diels-Alder of 9,10-dihydro-9,10-ethanoanthrace, with varying levels of deuteration (none, di, tetra) as shown in the figure below. 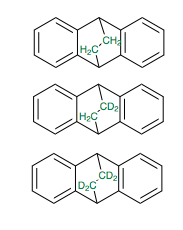 In order to discuss whats going on, we need to define some terms:

We can now consider the calculation that Thornton went through to determine if the reaction is indeed a concerted one:#

*: There are many examples of Diels Alder reactions that are stepwise, via radical mechanisms. The KIE's measured are necessarily small, meaning its often difficult to know if what you're looking at is actually correct. One thing that does hold up generally is that the reactions aren't ionic, due to the lack of any real solvent dependance (if the reactants are soluble in the solvent and you heat it hot enough, they generally proceed at the same rate, suggesting no stabilisation of 'intermediates' in polar solvents).

#: I'm paraphrasing the original paper, which will hopefully name it more digestible, but I still encourage you to read the actual thing, despite it being fairly dense

Not the answer you're looking for? Browse other questions tagged organic-chemistry reaction-mechanism pericyclic or ask your own question.