Endo rule and stereoselectivity in the Diels-Alder reaction

Do you agree with the stereocenter with the $\ce{-CF3}$ and $\ce{-CN}$ substituents in the product?

I thought that since $\ce{-CF3}$ is a better electron withdrawing group than $\ce{-CN}$, it would be placed opposite the diene, giving the product in which $\ce{-CF3}$ points up and $\ce{-CN}$ points down.

However, I believe my proposal above is wrong, because probably the substituent with the highest electron-withdrawing property, the $\ce{-CF3}$ should be placed endo because of secondary orbital interactions. Therefore, I expect the product above should be the correct one.

When I try to do the endo-product of the following reaction I came to the other syn product with absolute stereochemistry (S,R) instead of the (R,S)-product shown here. So I'm wondering, why we get endo selectivity in the first reaction and exo selectivity here instead.

Do you agree with the stereocenter with the CF3/CN in the product?

No, I would have expected the other isomer, the one with the $\ce{CN}$ and $\ce{NO2}$ groups pointing down in your drawing.

The explanation most often advanced for the endo preference is "secondary orbital interactions." The following diagram illustrates the two possible transition states (TS) in the reaction of cyclopentadiene and an $\alpha,\beta$-unsaturated carbonyl compound. One TS leads to the exo product, the other TS to endo. Note how the endo TS has the unsaturated carbonyl bond tucked under the double bonds in the cyclopentadiene ring; the exo TS does not. It is speculated (1) that the overlap of the carbonyl unsaturation with the diene unsaturation somehow stabilizes the endo TS making endo product preferred. The accompanying table illustrates how weak the endo preference can be. 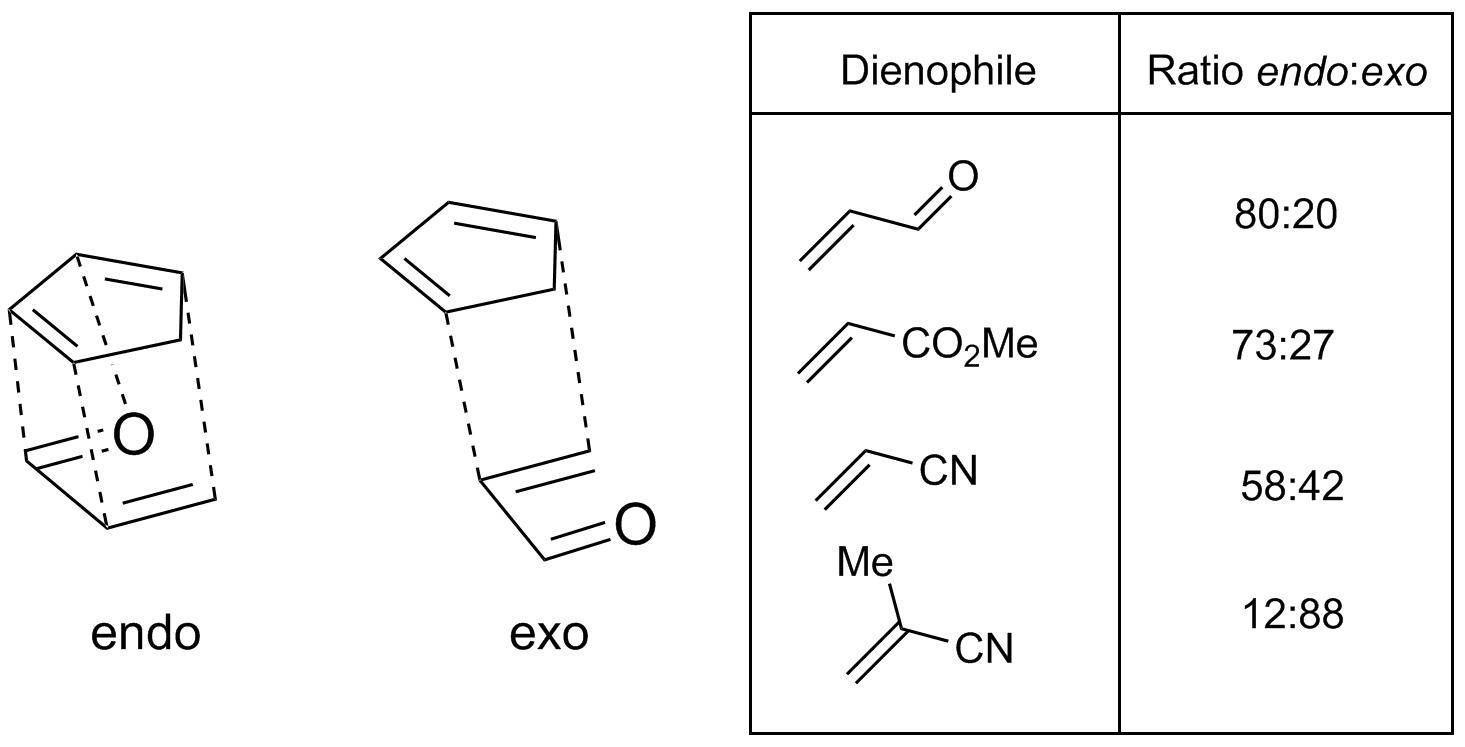 In your top example, this endo preference for a TS with overlapping unsaturation would lead me to suspect that the product with the unsaturated nitro and cyano groups (the $\ce{CF3}$ group is not unsaturated) oriented away from the 3-carbon bridge and tucked towards the double bond would be preferred.

Also, keep in mind that the endo preference applies to cases were the Diels-Alder reaction is run under kinetic control. As the following example shows, the exo product is generally thermodynamically preferred (less steric crowding). So if the reaction is run under conditions (high temperature) where the initially formed kinetic (endo) product reverts to starting material, eventually the thermodynamically favored product (exo) will be formed eliminating the kinetic preference for the endo product.

(1) see here for an alternate explanation for the endo preference

With respect to the second reaction, the endo/exo selectivity is not observable, since there is no substitution at the 1- or 4-positions on the diene. The difference between the product you predicted (S,R) and the shown (R,S) is that they are enantiomers. The product of two achiral reactants must either be achiral or a racemic mixture.

21
Why is the endo product the major product in a Diels-Alder reaction?

16
How are non-carbon stereogenic centers named (S/R)?
13
How is the Felkin-Anh model of stereoinduction correctly explained with MO theory?
6
Chelation-controlled aldol: why is the α substituent pseudo-axial?
4
Deciding more electrophilic centre between ester and thioester for SN type reaction
2
Cis, trans diene reacting with trans dienophile in D-A reaction
0
IUPAC nomenclature of cycloalkadienes with substituents and alkenes on the same carbons
8
Identification of endo and exo products in this Diels-Alder reaction