What is the mechanism for this nucleophilic conjugate addition?

What is the mechanism for this reaction-

My working so far: 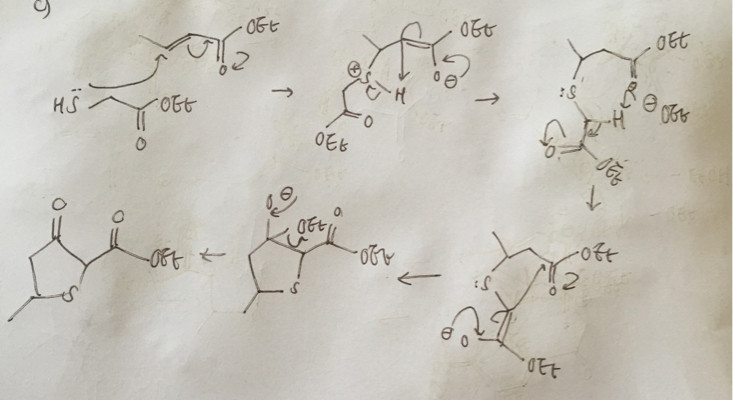 But my final product doesn't match with the one given. Where did I go wrong (if at all)? How should I have proceeded?

To figure out what's going on in an organic reaction, there are a few things you really should look out for:

If you apply these steps to every stage of the reaction, then deducing the mechanism will be easier, and you also save yourself a lot of time by not having to memorise a bunch of mechanisms that you have been previously taught. If those mechanisms were taught by a competent lecturer, you should be able to apply the three steps above to see exactly why those reactions happen.

The solution (courtesy of @Jan)

So, without further ado:

What functional groups are present on the molecule?

What are the conditions?

That's easy too. $\ce{EtO-}$ is strongly basic, but it can also act as a decent nucleophile.

Which of the functional groups are most reactive in base?

Well, to begin with, the thiol is acidic, so it will be deprotonated easily. No question about that.

Now you have a couple of electrophiles - the two esters - as well as a couple of nucleophiles: the thiolate anion, as well as the ethoxide anion. A hard base such as ethoxide is not likely to react in a conjugate addition. Maybe it might react directly with the esters at the carbonyl carbon? But wait! Both esters are ethyl esters $\ce{RCO2Et}$. So, you can use ethoxide to attack those esters all you like, but you won't get anywhere doing it - you'll just get back the same product. In fact, that's exactly why we use ethoxide instead of a different base like methoxide, $\ce{MeO-}$: to prevent transesterification.

So, let's talk about the thiolate anion instead. It's pretty nucleophilic, and you also have an electrophilic α,β-unsaturated carbonyl, so these can react:

Now, you have a nucleophilic enolate, as well as an electrophilic ester on the other side. They can immediately react with each other to form the product that you are given:

This reaction has a name - it is called a Claisen condensation, but that's not important! The important part is that you realise that it is just the reaction of a nucleophile with an electrophile.

An alternative (my original answer)

There might actually be another possible product, though. The enolate that you formed above could pick up a proton from somewhere (either ethanol, or perhaps another thiol molecule) to give the conjugate addition product, which is exactly the same as the one you drew. However, your initial addition product had a positive charge, which is never a good idea in a basic medium. Under basic conditions, you should always deprotonate first and reprotonate at the end of any reaction.

If this were to be the case, you should probably go through the three steps again:

That's still pretty easy. You have a sulfide and two esters. 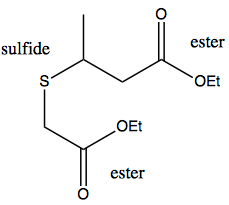 Well, the sulfide is indeed nucleophilic and you could use it to attack either one of the electrophilic carbonyl groups. But there are a few things that don't really favour this: 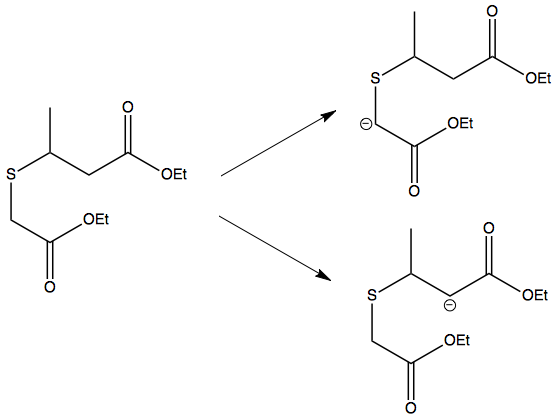 The first of these two is more stable than the other, because the electronegative sulfur atom is capable of withdrawing electron density from the negatively charged carbon. (Actually, there are several theories as to why sulfur stabilises the carbanion, but I won't discuss that here. See this paper, for example.) So, it is that first conjugate base that will be preferentially formed.

At this stage, you have a good nucleophile (the anion) as well as a good electrophile (the carbonyl on the other side). So, what's left is to react them in the same Claisen condensation as above:

There we go, side product.