How accurate is this polar mechanism for the Diels-Alder reaction?

So the prof got to Diels-Alder without discussing it in the context of molecular orbital theory. Instead we got a resonance picture of what happens... this is what he told us:

2) For ethene we can similarly draw a dipolar resonance structure.

From there we're told to simply use Coulomb's law - opposite charges attract - to complete the mechanism. 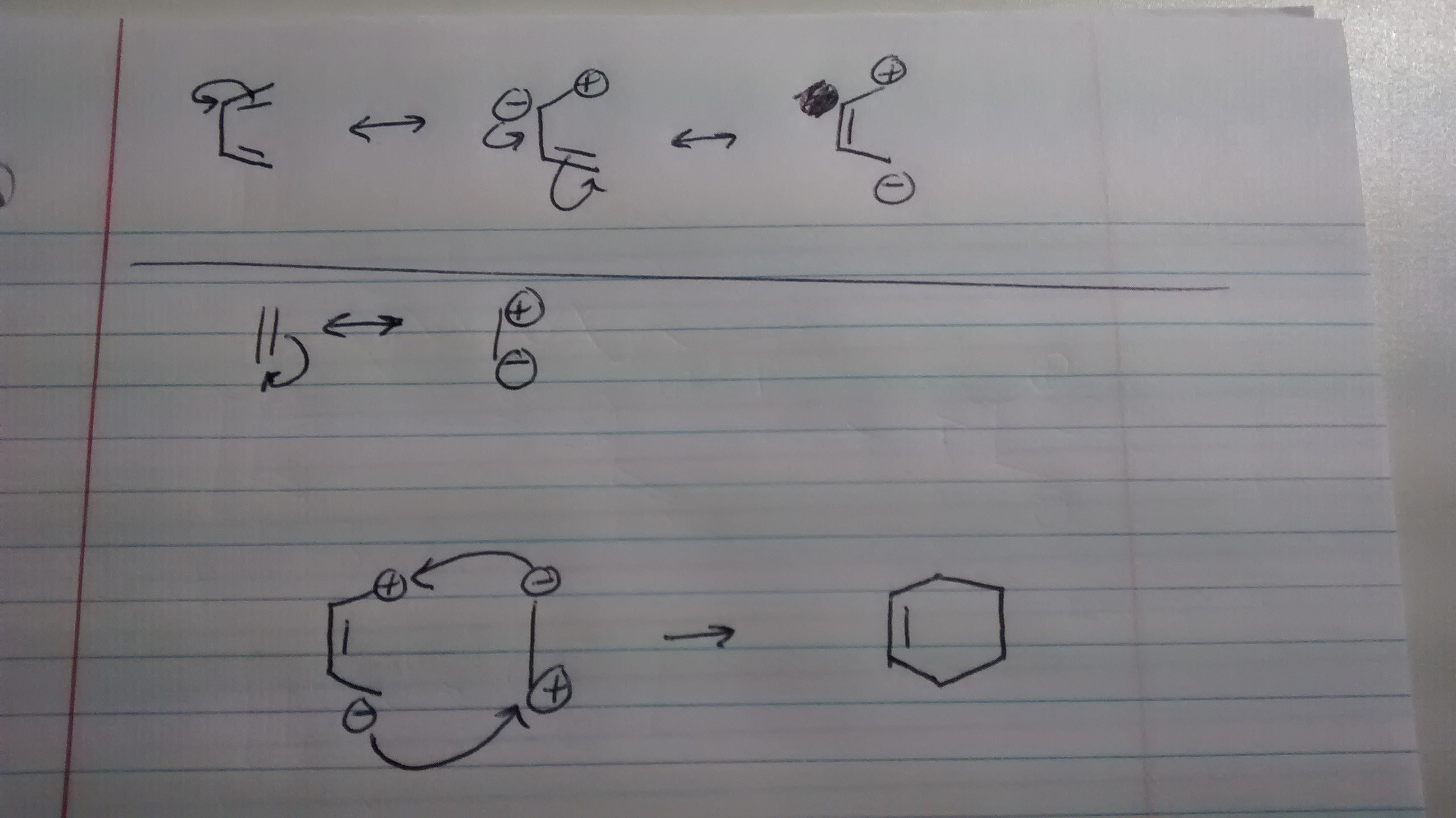 So, how adequate is his electrostatic explanation? Is it adequate - probably ... if one simply wants to learn it for a test. But is it conductive to further understanding of chemistry? I feel rather short-changed here since I'm paying him the big-bucks (tuition is insane) and the book goes into far greater detail ...

ETA: I asked the guy about and grilled him on the electrostatic explanation. For example I raised Martin's excellent point about the fact that the dieneophile cannot be that polarized - otherwise wouldn't it be a liquid instead of a gas due to the strong intermolecular attractions?

He instead went on a tangent on electron-withdrawing groups and how the electrostatic explanation can explain these ... what do you think? 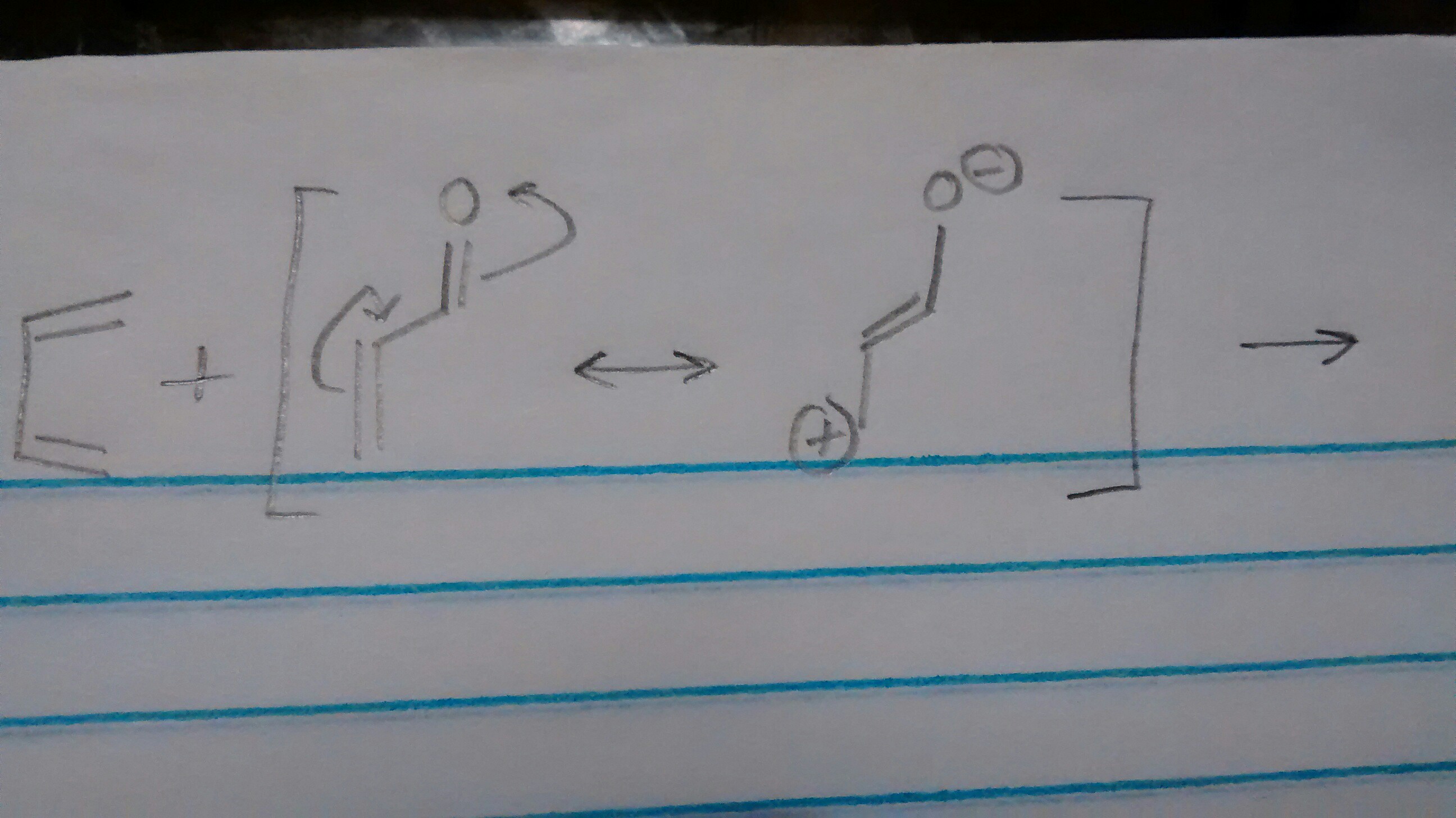 Disclaimer: This is not a full answer. I was just too long for a comment.

I think the suggested mechanism is not entirely wrong, it might be a contributing factor of the whole process, but not a very important one. In the last fifty years, the mechanism has been discussed in almost countless publications. One of the more recent ones by Goldstein et. al. concluded that a concerted pathway is the most economical.[1] They also included possible diradical pathways and the similar. Of course there is no uniformly applicable mechanism, it is very dependent on the substrates. Many of the reactions can be effectively described by frontier molecular orbital theory, so it is also possible to do so for the simplest Diels-Alder reaction.

There might be many more publications out there discussing the whole mechanism in pretty exhausting detail, but for a start I thought the cited one will do just fine. Just to name some more, see [2] through [4].

The electrostatic interpretation is tempting, as it is simple and it explains the simplest case very well. I believe it explains it too well for the wrong reasons: I would not expect the polarisation, i.e. induced dipole, in ethylene and butadiene be strong enough to make this happen at all. Both are colourless gasses at room temperature. If there were more induced dipoles, they would be liquid, which means that these molecules are basically unpolarised.

In a publication by Gian Franco Tantardini and Massimo Simonetta it was stated, that the contribution of the polarised Valence Bond Structure is very little, see [5]. If I read it correctly, the contribution is less than 1%. This alone should suffice to disregard a mechanism purely based on electrostatic considerations. In the same publication it is stated, that ethylene has quite a significant contribution from its polarised structure (about 25%). However, these consideration would in most cases not be able to describe streospecific reaction products, that are obtained from different substrates.

As another aspect, one must not forget, that the ground state of 1,3-butadiene is trans and it requires just a bit of energy to rotated it to the necessary cis formation, which should be about 10 times less present. So what are the odds having a well polarised ethylene hitting a polarised cis-butadiene in the right angle at the right speed. There has to be more to it...

This was a great opportunity to introduce a new class of reactions. So many of the reactions discussed in introductory organic chemistry are polar. Here was a chance to point out that there are also many non-polar reactions. In order to explain these reactions mechanistically, the concept and power of aromaticity could have been reapplied.

The class of concerted reactions (variuos cycloadditions, electrocyclic reactions and sigmatropic rearrangements, etc.) should have been (at least) mentioned. In addition to presenting the Diels-Alder reaction as a member of this class of reactions, the intriguing example of the sterospecific, thermal ring opening of cis- and trans-3,4-dimethylcyclobutene could have also been presented in passing. This example almost always elicits a "why does it open like that" response and whets the student's imagination and interest in further learning. 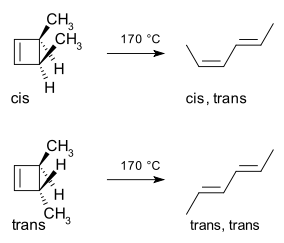 If this wasn't the time to delve into MO theory, the concept of aromatic (4n+2 electrons) and antiaromatic (4n electrons) transition states could have been introduced. Teaching this approach doesn't take long at all and it makes for a nice tie-in back to benzene aromaticity. This approach neatly explains why the Diels-Alder reaction occurs so readily, but the dimerization of ethylene to produce cyclobutane does not.

The mechanism of the butadiene + ethylene Diels-Alder is not wrong as drawn. It shows the concerted movement of electrons from the diene to dienophile resulting in cyclohexene. This correctly describes the bond formation. It is unusual to see the parent Diels-Alder reaction explained through those minor resonance contributors. We often draw mechanisms through minor resonance contributors to explain aspects of reactivity.

The second problem is how to handle substitution. The Diels-Alder reaction can create four stereocenters, which suggests that upto 16 stereoisomers can result. However, that is not what is observed. There are only specific stereochemistries of products that result from specific stereochemistries of reactants: the Diels-Alder reaction is stereospecific. Without invoking molecular orbitals, explaining this is impossible. One can learn the rules for stereochemical outcomes, but the rationale relies on the interaction of MO's.

The addendum to the question gives some indication of what the instructor was thinking when introducing the Diels-Alder reaction. Although the Diels-Alder reaction is not a traditional nucleophile-electrophile reaction, it does follow frontier molecular orbital theory: one of the component's HOMO interacts with the other component's LUMO. Typically, the dienophile provides the LUMO, which is the traditional role of the electrophile. An alkene conjugated to an electron withdrawing group (such as a carbonyl) is more electrophilic. It's also a more reactive dienophile. So there is a parallel between electrophilicity and dienophile reactivity both explained by having a lower LUMO.

The same is true with respect to the diene component. Typically, the diene provides the HOMO, which is the traditional role of the nucleophile. A diene substituted with an electron donating group (such as a methoxy group) is more reactive toward dienophiles and electrophiles.

So while the Diels-Alder reaction is non-polar, it can have polar character. It turns out that drawing resonance structures of the reactants is very useful for predicting the regiochemistry reactions with polar components. The major product will result from bond formation of the most nucleophilic end of the diene with the most electrophilic end of the dienophile (normal electron demand DA). Those resonance structures are simply substituted versions of what the instructor started with. 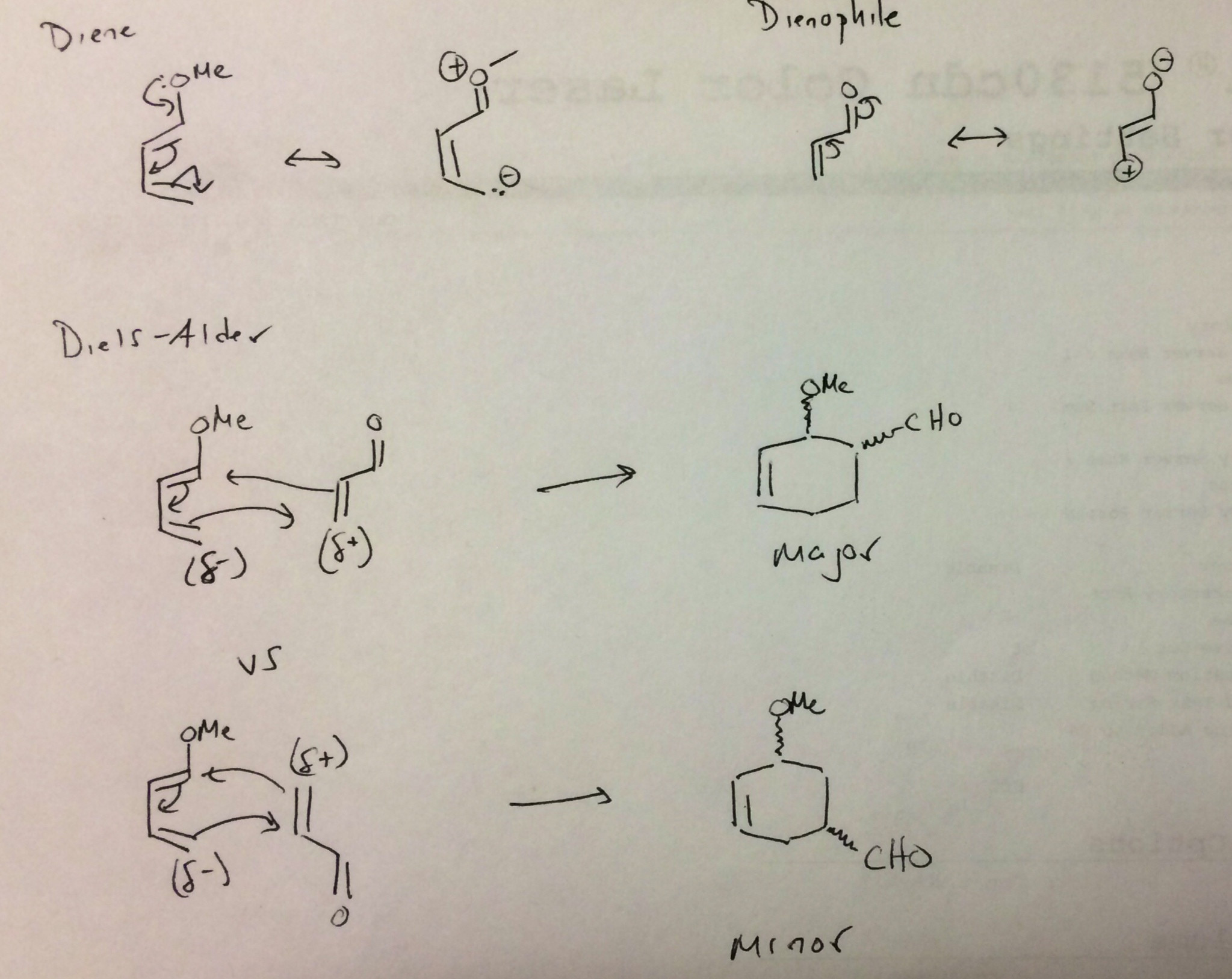 This is not a full answer either, but it needs to stand alone from the previous discussions.

You can't draw resonance structures without MO theory. This discussion is formally impossible.

12
Exceptions to motif: nucleophile attacks electrophile
6
Why can anthracene, but not phenanthrene, take part in Diels–Alder reactions?
5
Stereochemistry of product in Diels-Alder reaction