What is the origin of the naming of deoxycorticosterone acetate?

Deoxy- means the compound misses an oxygen comparing to the name without the prefix.
Acetate means ethanoate in IUPAC language. Many biologists still abide old rules and call it acetate. And finally, corticosterone. I just threw away thoughts and checked for the formula online.
What is the law behind naming "corticosterone"? Is it relative to corticosteroids? Please answer in a detailed way!
Maybe it is corti+coster+one? Since I know that there exists cortisone and cortisol.

Naming complex chemical compounds in a straightforward systematic fashion is usually not very easy. And often there are trivial names, that existed way before this systematic naming scheme was introduced. Especially when it comes to naturally occurring compounds like steroids. The IUPAC defines steroids as the following:

Naturally occurring compounds and synthetic analogues, based on the cyclopenta[a]phenanthrene carbon skeleton, partially or completely hydrogenated; there are usually methyl groups at C-10 and C-13, and often an alkyl group at C-17. By extension, one or more bond scissions, ring expansions and/or ring contractions of the skeleton may have occurred. Natural steroids are derived biogenetically from triterpenoids. 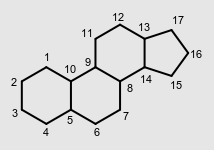 The name Deoxycorticosterone acetate is itself derived from a trivial name. The underlying principle compound is corticosterone and its systematic steroid name is 11β,21-dihydroxypregn-4-ene-3,20-dione, see [1] Table 2. It can be derived from cortisol, which has an additional hydroxy group in position 17. The systematic name therefore is (11β),17,21-trihydroxypregn-4-ene-3,20-dione.

You assigned correctly, that the prefix de(s)oxy- refers to losing an oxygen containing functional group. In this case a hydroxy group at position 11. The systematic name for 11-deoxycorticosterone would therefore be 21-hydroxypregn-4-ene-3,20-dione.

Finally the acetate refers to an acetyl ester group at position 21 (in the sidechain). Interestingly the systematic name for cortisol acetate is 21-O-acetylcortisol. Since it has already a trivial name, see [1], 3S-4.3:

When the steroid acid has a trivial name that already specifies the hydroxyl group that is esterified, the prefix must be O-acyl-.

Esters of steroid alcohols
Esters of steroid alcohols are named by the appropriate steroid substituent group followed by that of the acyloxy group in its anionic form. The steroid name is formed by replacing the terminal -e of the hydrocarbon name by -yl, -diyl, etc. and inserting this before the locant with a Greek letter to designate position and configuration. When necessary locants should be used with the anionic part of the name. Examples: [...]
The prefix form acyloxy-, with the appropriate locants, is used if there is a preferred functional group as the suffix (e.g. an acid or lactone). Examples: [...]

So in this case since you have a ketone, which is probably more important, I would choose the second part of this rule. Hence the systematic name becomes 21-acetoxypregn-4-ene-3,20-dione.

As you can see, naming is quite a big, often confusing subject and sometimes the origins are not clear at all. And your analysis was completely correct in every way. Trivial names are often like the vocabulary of a specific language - if you don't know it, you have to look it up.

Additional fun fact:
The name acetate is a retained name which can be used in a semisystematic way.

What is the law behind naming "corticosterone"?

Not the answer you're looking for? Browse other questions tagged organic-chemistry nomenclature drugs or ask your own question.

9
IUPAC naming - choosing the main branch
9
What are the practices to naming organic chemicals by abbreviations?
4
Origin of the names “thionyl” and “sulfuryl”
3
Naming tetrahalogenated benzene
5
Origin of the name of barbituric acid
4
Formyl chloride naming
10
What is the name origin of ester?