Why is the chirality center in (1R, 2S)-2-fluorocyclopentane-1-carboxylic acid 1R and not 1S?

I'm confused why the chirality center in (1R, 2S)-2-fluorocyclopentane-1-carboxylic acid, is 1R and not 1S.

There are two substituted carbon atoms. Discounting sterochemistry, in the substitutive nomenclature, the carboxy group has higher priority than the fluorine group. Thus, the framework is 2-fluorocyclopentane-1-carboxylic acid. Then, there is

a) a carbon bound to two other carbons, an hydrogen, and a fluorine.

Among the atoms around the stereogenic centre, fluorine, with an higher atom number than carbon, has highest priority within the CIP-rules now applied (labeled 1). Carbon 2 is of higher priority than the one labeled with 3 because (in the next layer), (one carbon and an hydrogen atom) is of higher priority than (two hydrogen atoms). We observe the substituents from the side opposite to convention, though; thus, the stereogenic centre is (S) configured.

b) a carbon bound to three other carbons, and an hydrogen.

Again, it is the second layer which offers decision about the priorities. Here, we already observe the stereogenic centre from the convened perspective. And if we think of the four atoms like a steering wheel, with the atom of lowest priority (here: hydrogen) in the back, it turns to the right hand side; the centre is (R).

Thus (1R,2S)-2-fluorocyclopentane-1-carboxylic acid is the name for the compound.

Note: The site's compilation resources for learning chemistry has a section dedicated to nomenclature, too. It equally mentions programs which you may use to draw and assign the CIP labels, too. Don´t worry, these assignments demand training, training, and training.

The digraph illustrates that the first shell around C1 in A is bound to three carbons (C2, C5 and C6). No decision can be made here! Proceeding to shell 2, C5 is attached to C4 and two hydrogens, C6 is connected to three oxygens and C2 is attached to a fluorine, carbon and hydrogen. Now these connected atoms are to be ranked in descending order of atomic number, {C,H,H}, {O,O,O} and {F,C,H}, respectively. Here is where the student usually becomes confused. Now compare the first member in each triad. Because F>O>C, C1 in A has the (R)-configuration. Your C1 (C,O,O) should read (O,O,O). Even so, it would come in second to the triad bearing fluorine. In compound B, where nitrogen replaces fluorine, C1 has the (S)-configuration because O>N>C.

You may want to consider this alternative to the "steering wheel" method for assigning configuration. This link will help assigning CIP configurations. 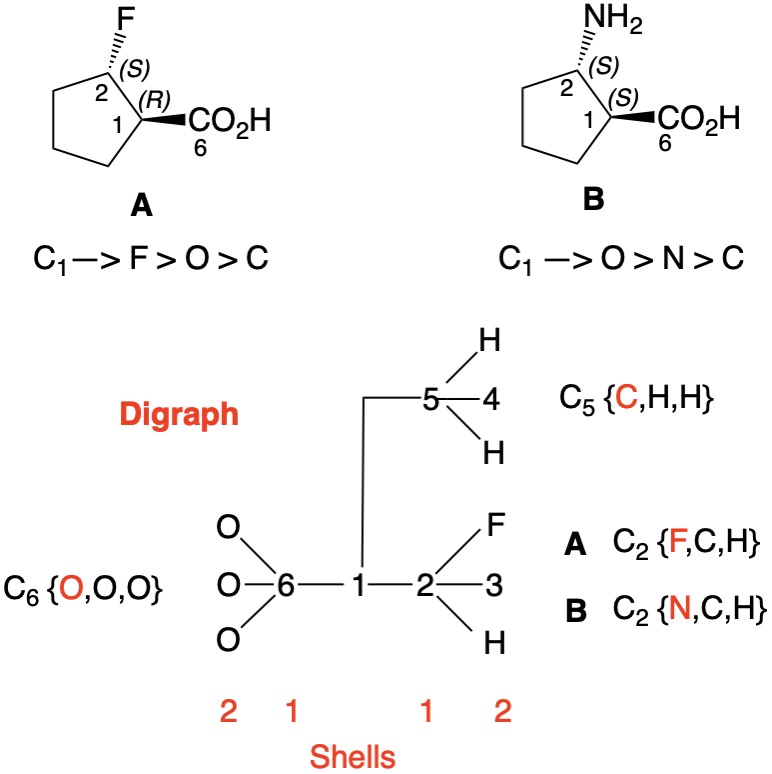 1
R,S Configuration
1
R, S Configuration and Branching - Which Path?
1
What is the absolute configuration of carbon 4 in glucopyranose?
0
Will an acyl chloride be attacked by water molecule to form carboxylic acid?
4
Is the existence of chirality center equivalent to chiral?
1
Naming ester as a substituent to carboxylic acid
2
Why is the carboxyl proton in salicylic acid more acidic than the phenol proton?