Naming ester as a substituent to carboxylic acid

The $\ce{-COOH}$ group should be included as the suffix of the parent chain, while the $\ce{-COOR}$ is indicated using a prefix.

In fact, Section P-65.6.3.2.2 of the Nomenclature of Organic Chemistry: IUPAC Recommendations and Preferred Names, 2013 (aka the Blue Book) specifies the rules for this.

When, in an ester with the general structure R-CO-O-R' or R-S(O)XO-R', another group is present that has priority for citation as the principal group or when all ester groups cannot be described by the methods prescribed for naming esters, an ester group is indicated by prefixes as 'acyloxy' for the group R-CO-O—, and 'alkyloxy(alkany1)...oxo' or 'alkyl(allcanyl)oxycarbonyl' for the group —CO-OR'.

I quote the example provided in the text:

And another one (not from the Blue Book though) 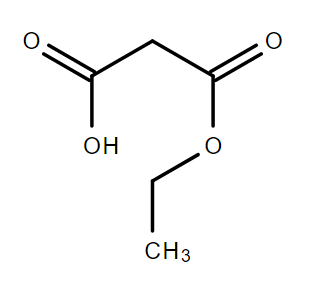 Not the answer you're looking for? Browse other questions tagged organic-chemistry nomenclature carbonyl-compounds hydrocarbons esters or ask your own question.

-1
How to name the following compound?