Can anyone propose/draw a mechanism for Method A, below, from this paper? Almost all other literature use method B and reagents such as SOCl2. 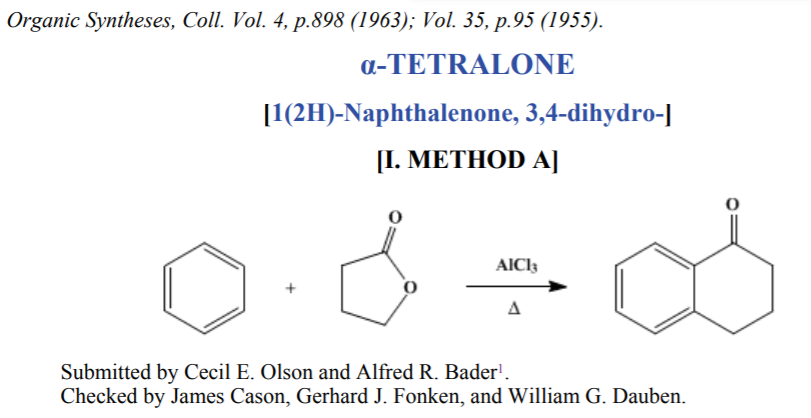 The reaction of benzene and γ-butyrolactone with AlCl3 was reported by Truce and Olson1 in 1952. The authors found that the ratio of γ-phenylbutyric acid to α-tetralone was dependent on the AlCl3/lactone ratio. The larger the latter ratio; the more α-tetralone. (See Table 1 from the paper). The ratio employed in the Organic Syntheses preparation is 3.7. Table 2 from Truce's paper provides an explanation for the role of excess AlCl3 but it doesn't explain the alkylation of benzene.

The lactone-AlCl3 complex 1 can act as an electrophile aromatic alkylation (1-->2-->3). Subsequent intramolecular acylation of 4 leads to α-tetralone 6. Bear in mind that γ-butyrolactone reacts with HBr to form γ-bromobutyric acid. 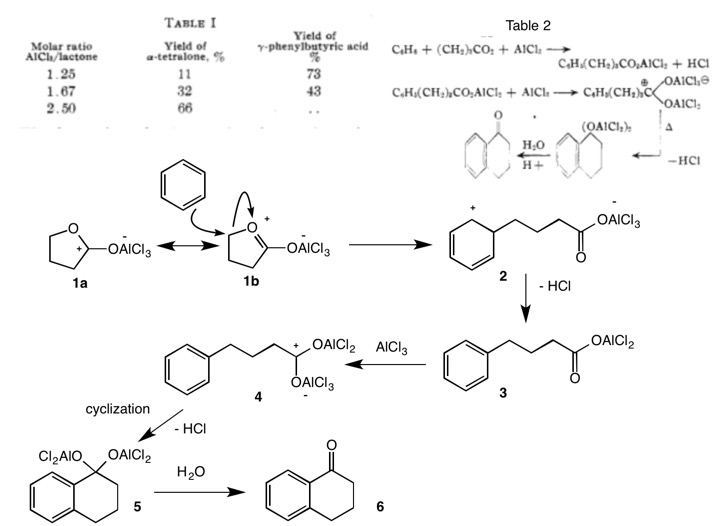 Not the answer you're looking for? Browse other questions tagged organic-chemistry electrophilic-substitution acylation or ask your own question.

13
Synthetic route for the conversion of ethanol to but-1-yne
4
Synthesis of synthetic detergent with Friedel Crafts Acylation
10
How to visualize the rearrangement of a pentacyclic triterpene alcohol?
3
One-step oxidation of hex-1-ene to hex-2-en-1-ol
4
Carbocation Rearrangement in SNi
6
What software was used to create these organic reaction scheme figures?
4
Electrophilic Substitution with Ceric Ammonium Nitrate and Lithium Bromide as reagents