I propose the following synthesis.

Therefore, how reasonable is my synthesis? Is it correct?

Also would sulfonation before getting rid of the C=O work? Something tells me no; the C=O is able to withdraw electrons from the ring via resonance, and that would make it a meta-director. 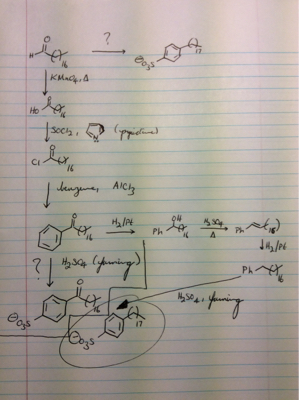 Your synthesis looks reasonable, and it is correct to perform sulfonation as the very last step, because the alkanoyl group would be meta-directing for the reason you have provided.

You can simplify your synthesis by reducing the carbonyl group away in one step with the Clemmensen reduction, which works well for aryl-alkyl ketones produced by Friedel-Crafts acylation.

Alternatively, the Wolff-Kishner or Mozingo reaction could be used. Reducing the number of steps in your synthesis would in practice have the benefit of increased overall yield for the final product, as the yield of each single step is usually < 100 %.

Not the answer you're looking for? Browse other questions tagged organic-chemistry reaction-mechanism synthesis acylation or ask your own question.

1
How to explain the products of the nucleophilic aromatic substitution of 1-chloro-3-methylbenzene with NaOH?
0
Synthesis for turning synephrenine into N-methylphenethylamine
2
Is a Methoxy group meta directing in this problem?
2
Synthesizing 2-bromoaniline from bromobenzene
2
How can I synthesize 2‐amino‐3‐(chlorosulfonyl)benzoic acid from toluene or benzene?