The 2020 IChO Preparatory Problem List (source here) had the following reaction as part of the solution to the first question: 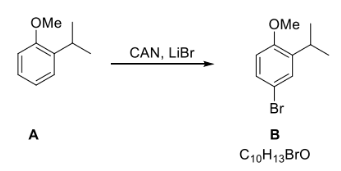 What is the mechanism for this 'Electrophilic Substitution' of the ring? I have not encountered such a reaction before. As far as I'm aware, CAN is an oxidizing agent, whereas Lithium Bromide would dissociate to give $\ce{Br-}$, which is not an electrophile. Aromatic Nucleophilic Substitution (ArSN) is out of the question here, as the ring is highly activated by the methoxy group.

The only probable reaction I can think of is that CAN successively oxidizes $\ce{Br-}$ to $\ce{Br2}$, then to $\ce{Br+}$, but this seems unlikely, and I could not find such a reaction mentioned anywhere in literature. A mechanism for this reaction, preferably along with a reference, would be much appreciated.

First of all, the linked paper clearly points out the following:

Hint: In second step (A $\rightarrow$ B), combination of lithium bromide and cerium(IV) ammonium nitrate (CAN) is used as a brominating reagent

From a problem solving perspective, this step is trivial for someone who has read the problem well (not me, unfortunately :)

Ceric Ammonium Nitrate is a very strong oxidizing agent and has the ability of oxidizing benzene compounds first to Nitrobenzene, then to quinone or quinoid derivatives1. Assuming this line of reasoning works, the quinoid derivative could then undergo nucleophilic addition with $\ce{LiBr}$, followed by workup with acid to give the p-subsituted benzene derivative. This could be a probable reaction mechanism, if the substitutent was $\ce{-OH}$ instead of $\ce{-OMe}$ and if an acid workup step was involved. Also, this mechanism can give the unwanted product 4-bromo-3-isopropylphenol, as shown below:

However, this reaction mechanism is very speculative, and it also won't hold good here, because the substituent is $\ce{-OMe}$. Some further research on the links provided in the comments2 yielded the following results:

Alkyl aromatics were brominated in the side chain using sodium bromide and CAN. Asakura et al. reported bromination of C-5 of uracil nucleosides using CAN and lithium bromide in acetonitrile.

This is also the reaction present in (3), which seems to have been lifted without a citation to Asakura et al. 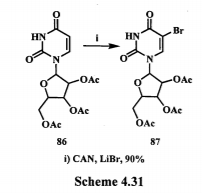 Finally, Asakura et al. 4 provides a suitable mechanism for this reaction, which I correctly assumed arose from the oxidation of $\ce{Br-}$ to $\ce{Br2}$, and then to $\ce{Br+}$ 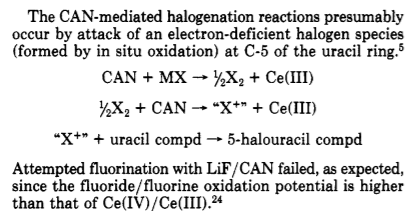 Not the answer you're looking for? Browse other questions tagged organic-chemistry aromatic-compounds reference-request electrophilic-substitution or ask your own question.

10
Naproxene syntheses: electrophilic aromatic substitution on activated naphthalene
7
Azo coupling with arenediazonium salts - why isn't nitrogen gas lost?
6
Bromination of a benzene based molecule
9
Can phenol be detected with a ceric ammonium nitrate test?
14
Most activated position on para-terphenyl for EAS
6
Nitrosonium ion in the nitration of phenols
0
Doubts Regarding Ceric Ammonium Nitrate Test for Alcohols
8
Electrophilic substitution of benzene with conc. HNO₃ and HNO₂
1
Oxidation of alcohols by Ceric Ammonium Nitrate
7
Electrophillic susbtitution of bromine on styrene and cinnamic acid in the presence of FeBr3, a Lewis acid