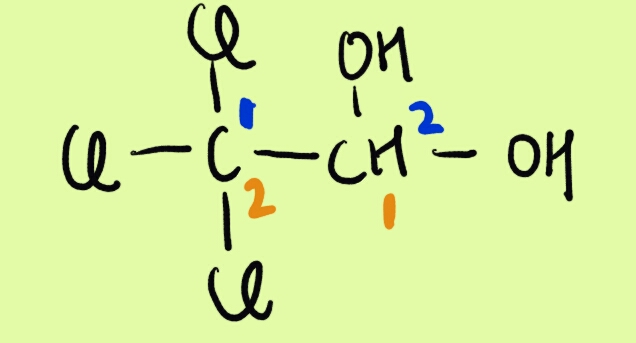 I came across this question while practicing iupac nomenclature.

Or should we start the numbering from the right side instead (shown in orange) as alcohol group is preferred over the chlorine group?

Concerning the numbering of locants for substituents, the most important simplified criteria are:

The $\ce{-OH}$ group is the principal characteristic group in this case. It is expressed as suffix ‘ol’.

Therefore, low locants are assigned first to the $\ce{-OH}$ groups according to Rule (c), which yields ethane-1,1-diol.

After that, a low locant is assigned to the chloro groups according to Rule (f); however, the only possible numbering left is 2,2,2-trichloroethane-1,1-diol.

-1
Order of nomenclature precedence among these functional groups

2
Nomenclature of a poly-nitrile
1
What is more important, to have the parent chain be the cycle or the chain that has an hydroxyl group
7
Nomenclature problem, when would ring be parent?
5
Selecting parent chain considering substituent (prefix) functional groups
4
Why is the IUPAC name of 1H-benzo[d]naphthalene not 1H-benzo[i]naphthalene?
3
Why is ethoxyethane the preferred IUPAC name for diethyl ether rather than 1,1'-oxydiethane?
2
Selection of parent chain (IUPAC nomenclature)

// TODO sg: TMP solution until we are confident in our current implementation of async imports // once we are, we can move the if into the js entry file and dynamically load the mark obsolete module