In the nomenclature of fused arenes you need to add a 'fusion locant'. The first face should correspond to positions 1 and 2 and is lettered ‘a’, continuing alphabetically clockwise around the exterior of the parent structure. In this case, the parent is naphthalene and using numbering of naphthalene the benzo is fused on position d so the name would be 1​H-benzo[d]naphthalene 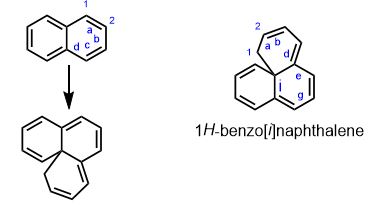 But IUPAC also has some rules about the orientation of such structures: (a) maximum number of rings in a horizontal row (b) the maximum number of rings in the upper right quadrant. (See the drawing on the right.) Subsequent the numbering of peripheral atoms in the preferred orientation starts from the uppermost ring. (If there is more than one uppermost ring, the ring furthest to the right is chosen.) Using that numbering scheme the face of fusion should be i.

organic-chemistry nomenclature
share | improve this question | |
edited May 6 '18 at 9:04

For the construction of a fusion name, the two components are numbered separately (if necessary), using letters for the parent component and numbers for the attached component. The corresponding rule P-25.3.1.3 in the current version of Nomenclature of Organic Chemistry – IUPAC Recommendations and Preferred Names 2013 (Blue Book) reads as follows.

(…)
Isomers are distinguished by lettering, continuously, each peripheral side of the parent component (including sides whose locants are distinguished by letters, for example, 2a,3a) using the italic letters a, b, c, etc., beginning with a for the side numbered ‘1 ,2’, b for ‘2,3’ etc. To the letter as early in the alphabet as possible that denotes the side where the fusion occurs are prefixed, if necessary, the numbers of the positions of attachment of the other component. These numbers are chosen to be as low as is consistent with the numbering of the compound and their order conforms to the direction of lettering of the parent component. (…)

The parent component for the example that is given in the question is naphthalene (not the complete benzonaphthalene). The letter as early in the alphabet as possible that denotes the side where the fusion occurs is d. Therefore, the correct name of the complete compound is
1​H-benzo[d]naphthalene.

The other numbering scheme described in P-25.3.3.1.1 applies to the complete fused ring system.

P-25.3.3.1.1 The numbering of peripheral atoms in the preferred orientation starts from the uppermost ring. If there is more than one uppermost ring, the ring furthest to the right is chosen. Numbering starts from the nonfused atom most counterclockwise in the ring selected and proceeds in a clockwise direction around the system, including fusion heteroatoms but not fusion carbon atoms. (…)

Thus, for the example that is given in the question, this numbering applies to the complete
1​H-benzo[d]naphthalene. In particular, this numbering is used for the locant of the indicated hydrogen. It would also be used for any substituents of the compound.

2
Name of “the” benzodiazepine