How many peaks of HCl are found in a mass spectrum?

In a mass spectrometer some hydrogen chloride molecules will split into atoms. Chlorine has two isotopes. The hydrogen involved here is the isotope $\ce{^1_1H}$ only.

How many peaks does a mass spectrum will show? 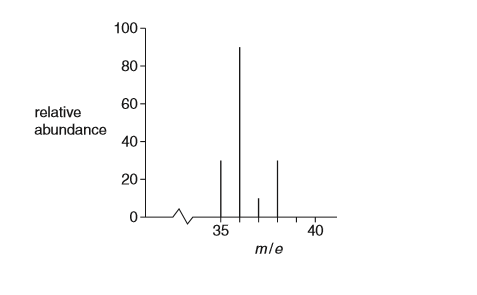 Collision between an electron and the molecule during a MS-experiment usually results in two phenomena:

Resonance capture is less frequent and usually doesn't add much to the spectra. For $\ce{HCl}$ considering electron ionization as the primary process the following process takes place:

One can possibly observe peaks of $\ce{[H]+}$ and $\ce{[H2]+}$, but those are usually have negligible intensities due to recombination processes.

Regarding the spectra OP provided, it looks somewhat strange as the base peak @ $m/z = 36$ is not $100\%$ (approx. $90\%$ instead). I would recommend to check for the experimental data in more reliable sources, e.g. in NIST database: 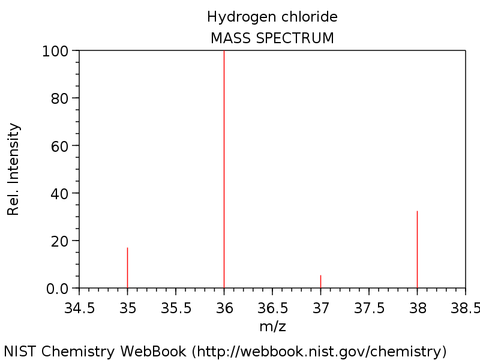 Not the answer you're looking for? Browse other questions tagged hydrogen mass-spectrometry isotope or ask your own question.

2
How to interpret a MALDI mass spectrum?
4
How to find the mass spectrum of Cl3+?
2
Predicting isotope patterns in mass spectrometry
2
Pentabromophenol Mass Spectrum
3
In a mass spectrum, are there peaks corresponding to a combination of 13C and bromine isotopes?
5
Carbon-13 NMR for chloroform