Can a liquid turn to a solid by applying pressure?

When pressure increases, volume decreases. If an extremely high pressure is applied to a liquid, is it possible to reduce it's volume to an extent where the molecules are very tight together, hence becoming a solid? Or do changes in pressure and volume not alter the physical properties of the substance and the liquid remains liquid?

It is possible to change a liquid into a solid, or in general change the phase a substance finds itself in by just altering the pressure.

You might want to refer to some graphs known as Phase diagrams that portray the effect of temperature and pressure on the physical state of a substance. 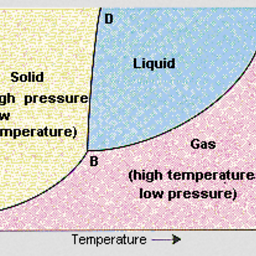 In this example if you're to draw a straight line from the point B to D, it'll have a subtle positive slope. So there's a possibility to transform a liquid into a solid without making any changes to the temperature conditions.

You might have heard of solid $\ce{CO2}$ or dry ice. I might be wrong but a part of me says carbon dioxide is pressurised and refrigerated for it to form.

An interesting thing to note here is that in case of a gas turning into a liquid, there's a temperature known as Critical Temperature ($T_c$) above which the gas cannot be liquified no matter how much pressure is applied.

Not the answer you're looking for? Browse other questions tagged phase pressure or ask your own question.

0
Why does ice melt slower at higher altitudes?

15
Why must both the critical temperature and pressure be exceeded to achieve the supercritical phase?
1
The effect of pressure on boiling point?
3
Metering Device decreases pressure yet produces saturated liquid?
1
Is it possible to have only liquid in a closed container?
5
What do the horizontal lines in a P-V phase diagram mean?