The characteristics and properties of supercritical fluids and the associated vapor-liquid critical point are well established. One thing that I've always been curious about, though: what is the physical explanation for why it's necessary for both the critical temperature and critical pressure both to be exceeded simultaneously in order for this phase transformation to occur?

ChemWiki's description ("Critical Point") provides some measure of an explanation:

Is there more to the physics than just "[t]he particles have too much energy for the intermolecular attractions to hold them together as a liquid"?

Per an early comment by Mithoron, the fact that increasing pressure on a supercritical fluid can eventually drive it to a solid phase would seem to imply that it's not quite that simple. See, for example, the phase diagram of carbon dioxide(source): 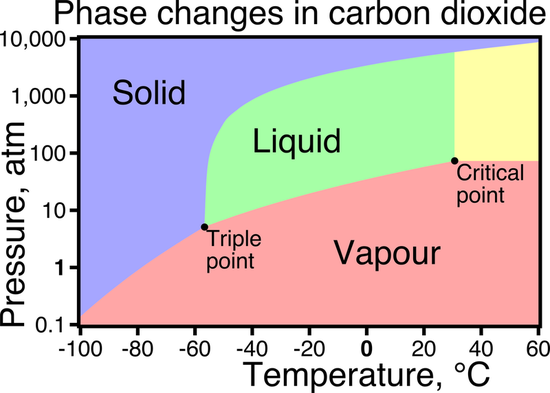 The diagram you included is very misleading in its use of color. The "yellow" supercritical regime doesn't really exist. Beyond the critical point, gas is indistinguishable from liquid. So instead of having a special yellow region, the supercritical region should be some gradient of green (liquid) and pink/orange (gas). The vapor pressure curve between the triple point and critical point is the curve along which liquid is in equilibrium with gas, i.e. those phases have the same molar free energy $G$. However, they obviously differ in many other properties, including molar enthalpy $H$, molar entropy $S$, molar volume $V$, etc. Moving along a trajectory in $PT$ space that crosses the vapor pressure curve results in a discontinuity of those values. Thus, such a phase transition is a first-order phase transition, as first-order derivatives of $G$ (such as $S=\left (\frac{\partial G}{\partial T}\right )_{P}$ and $V=\left (\frac{\partial G}{\partial P}\right )_{T}$) are discontinuous through the transition.

Say you were to start with liquid $\ce{CO2}$ at a $T$ slightly below and $P$ slightly above the critical point, and move through $PT$ space in a counterclockwise cyclic orbit around the critical point. As you lowered $P$, there would be a distinct first-order phase transition to gas -- the $\ce{CO2}$ would boil -- but then as you reached the bottom of the circle and started increasing $P$ and $T$, moving past the critical point, there would be no phase transition at all as you went to the yellow region in your chart. There would similarly be no phase transition as you reached the top of the circle and moved back into "green" territory. You'd get liquid carbon dioxide again, and when you go again through the circular path through $PT$ space, it would boil -- a distinct first-order phase transition -- again. But it would never condense, in the sense of a sudden change from gas to liquid. The change back to liquid $\ce{CO2}$ would be gradual, with no discontinuities.

So to specifically answer your questions:

The fact that increasing pressure on a supercritical fluid can eventually drive it to a solid phase would seem to imply that it's not quite that simple. See, for example, the phase diagram of carbon dioxide.

Think in terms of free energy landscapes. Solid, liquid, and gas phases are at the bottom of potential wells or pits in this $G$ surface. Past the critical point, the liquid "well" and the gas "well" are no longer distinct minima, but are the same. However that doesn't change the fact that if you move "up" in the free energy landscape by increasing $P$, you will eventually find the still-distinct pit (free energy minimum) for solid.

Consider the four paths through the phase diagram. 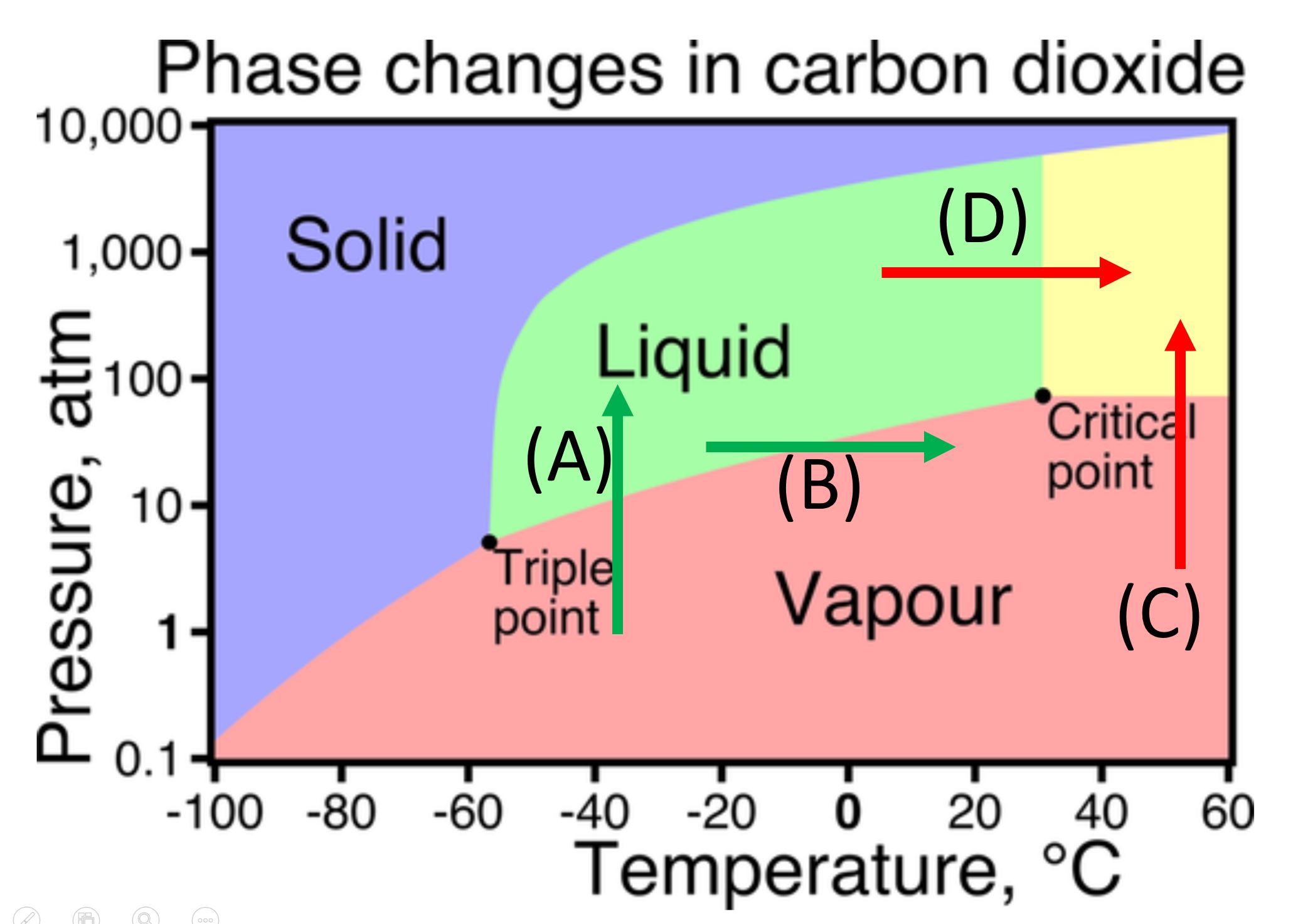 You can imagine why we call the yellow region that of the supercritical fluid. We can make this state coming from a liquid in process (D) or coming from a gas in process (C), but we never see a second phase. So is it a liquid or a gas?

As Curt F. stated in another answer, there is no phase transformation, it is just an area in the phase diagram that is not delineated by a phase change as you move into it or out of it unless you look at the phase boundary with the solid.

3
Does the density of a liquid and gas phase of a substance(nitrogen or water) converge when reaching critical point
3
At the freezing point, why is the vapor pressure of the liquid phase equal to the vapor pressure of the solid phase?
0
Why does a NOx container get cold when NOx is released? and What is the relationship of the vapor pressure curve with the liquid-vapor dome?
2
What happens when a super-critical fluid is compressed?
6
Is oxygen above the critical point always supercritical fluid? Would it still appear to roughly follow the ideal gas law?
5
Why exactly does high pressure (72 bar) nitrous oxide's pseudocritical¹ temperature drop so far when oxygen is added to make 50%v/v mixture? (Entonox)
3
At constant temperature, can the solid phase be more stable than the gas if pressure decreases?