I came up with this problem today and I can't find the answer elsewhere:

How does the oxygen atom bond to the four zinc atoms? To be more specific, what would be the molecular orbital diagram for the Zn4O cluster 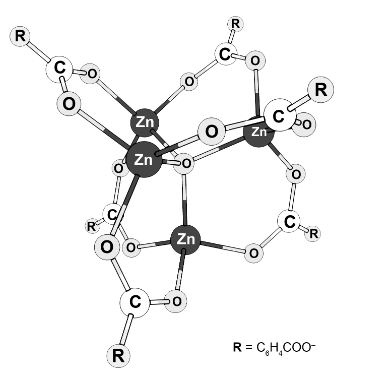 Does this have an obvious answer?

Per the original synthesis:

A small amount of hydrogen peroxide was added to the reaction mixture in order to facilitate the formation of $\ce{O^{2-}}$ expected at the centre of the secondary building unit.

Thus the central oxygen has a full octet, able to supply 2 electrons to each $\ce{Zn^{2+}}$ in the coordination complex.

Not the answer you're looking for? Browse other questions tagged bond molecular-orbital-theory coordination-compounds molecular-structure or ask your own question.

17
What utility does the Tau bond model of orbital overlap have?
1
Nitric Oxide Dimerization
39
How can the dipole moment of carbon monoxide be rationalised by molecular orbital theory?
0
Identifying the number of bonding and lone pairs without a dot and cross diagram
1
About dative covalent bonding and expanded octet rule