How to find the number of valence electrons?

I need to understand the following:

Considering an element Sulfur - S which has 16 electrons.

How do we calculate the number of valence electrons of S?

Now, considering the fact valence electron is 1, if we go by, up down up down rule, then as it is 1, hence the spin is up?

Fill up the orbitals in the following order (following the red arrows), which is increasing order of energy. Lowest energy fills up first. 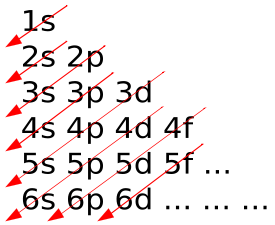 So let's take the example of sulfur.
The total number of electrons is 16. We'll distribute them in the following manner.

It is not simply the last 2 numbers while writing the electronic configuration.

For Lithium (3 electrons), we have: $1s^2, 2s^1$, which gives us a total of 3. Outermost orbit is the 2nd orbit and the total number of electrons in it is just one. Therefore valency of Lithium is one.

However, it is much simpler to do it the way I've shown above as with Sodium. Don't need to bring in all the orbitals

For the spin, just remember that you have to fill up the entire orbital with up spin electrons before you start putting the down spin electrons. Don't just alternate up and down.

For Phosphorous; let's say we've filled the 1s, 2s, and 2p orbitals. Now we add one up spin to the 3s, followed by a down-spin. Which leaves us with 3 more electrons to be added to the valence orbit (3rd). It is a 'p'-orbital, which needs to have 3 up spin electrons before any downspin ones can be accommodated. But we have only 3 remaining! So all will be up-spin electrons in the valence orbit. So we'll have a total spin of +3/2.

Hope I didn't complicate too much, but I've actually tried to make it as short as possible. I've still left out quite a bit.

4
Is there an easy way to find number of valence electrons"
7
Why do electrons need to be paired?
14
Why are full and half filled orbitals the most stable?
4
Term symbols: counting electrons. How?
2
How do molecules with muons and electrons bond?
3
Order of filling electrons in Jahn-Teller energy diagram