Why don't we see these lanthanide species?

Why is this not the case?

$^{[2]}$ Ordering (relative energy) changes with the number of electrons.

I strongly recommend having a look at these questions:

This is really the exact same question but just in a different context of transition metals: Cr(II) and Mn(III) - their oxidizing and reducing properties?

The answer is because exchange energy (which is the reason behind the stability of half-filled and fully-filled shells) is not the main factor that decides the predominance of an oxidation state.

Whether an oxidation state can be reached depends on the balance between two things:

Exchange energy effects only give rise to minor variations in ionisation energies. The increase going from the nth to (n+1)th ionisation energy is far greater than any exchange effects.

Just like the magnesium example I gave in the other question, the lanthanides have very small second ionisation energies, and these can also be easily compensated for by bonding or ion-dipole interactions in solution. Take your example of $\ce{Sm+}$. The fact that it has a $\mathrm{f^7}$ configuration means that the second IE is marginally larger than would be expected. However, this marginal increase hardly changes the fact that the cost of ionising Sm a second time can be easily recouped.

Likewise, your example of $\ce{Pr^5+}$ is totally unrealistic because those 5th IEs are so huge that there is absolutely zero chance that they will give it up, no matter what exchange stabilisation there is.

The predominance of the +3 ionisation state for the lanthanides is therefore simply a consequence of IE1 + IE2 + IE3 being sufficiently small, and IE4 being way too large. That's all there is to it. Note how the variations in the graph below (due to exchange energy effects) are so small that all the IE graphs never cross over each other. IE5 is so huge that they didn't even bother plotting it! 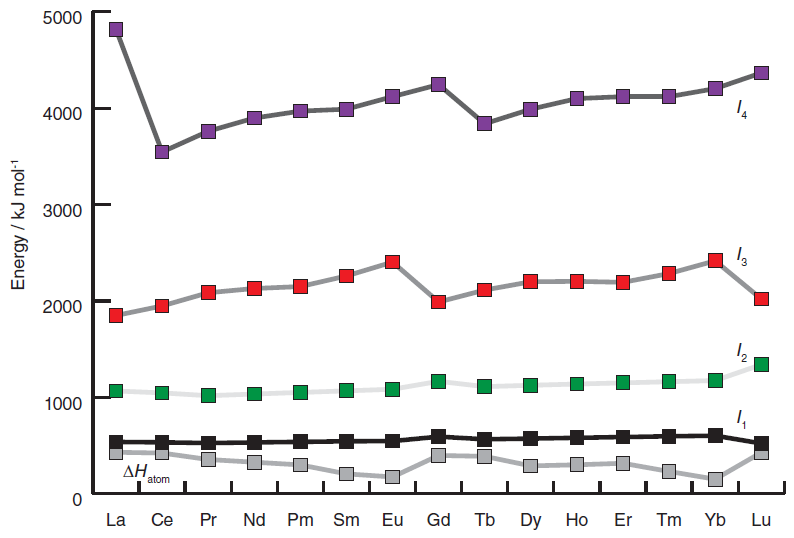 Not the answer you're looking for? Browse other questions tagged physical-chemistry electronic-configuration stability oxidation-state elements or ask your own question.

11
Cr(II) and Mn(III) - their oxidizing and reducing properties?
5
Europium stability in +2 and +3 state
5
What is meant by 'electrons of like/unlike rotation'?
4
Howcome orbitals become 'core-like' when electrons are removed?
4
Predominance of III oxidation state for lanthanides
0
Why do the f-block elements ( inner transition metals) have an oxidation number of +3?

2
Why does Pb normally have an oxidation number of +2?
6
Why isn't thallium triiodide stable?
5
What is meant by 'electrons of like/unlike rotation'?
1
Why is thallium(III) oxide stable while thallium(III) chloride unstable
5
Europium stability in +2 and +3 state
3
Why BiCl5 isn't stable?
2
Cerium electronic configuration change from 0 to +2 oxidation state