Why does basic peroxide react via conjugate addition rather than through direct addition?

The $\ce{HOO^{-}}$ ion reacts as a nucleophile at carbon number three and consequently the reaction is conjugate addition. However, Why would a peroxide not react through direct addition. I know that if the double bond wasn't there it would attack the carbonyl directly and then a rearrangement would occur (Baeyer-Villiger reaction: http://en.wikipedia.org/wiki/Baeyer%E2%80%93Villiger_oxidation). Why must it react at the alkene?

The reason that is given by Clayden et al. (chapter 23) is that because the peroxide has two adjecant lone pair on oxygen it exhibits an alpha effect, which is more or less a delocalization interaction between the lone pair orbitals. For reasons not entirely known (the basis of the alpha effect is an open problem in chemistry) this results in an increase in energy of the electrons in the resulting delocalized HOMO, making it more nucleophilic. You can imagine that this delocalized HOMO is also softer than the single localized oxygen lone pair and hence it tends to react at the soft double bond instead of the hard carbonyl site. 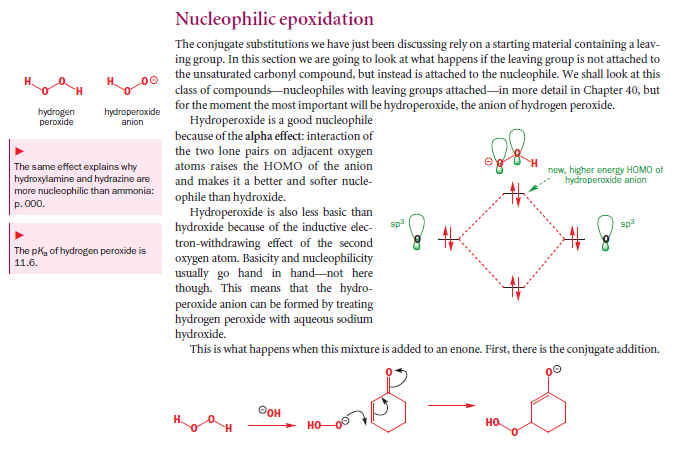 Why would a peroxide not react through direct addition […]

Nobody says that it doesn't, but apparently that isn't a productive route: there are no products found that would result from such an attack. Consequently, this reaction, which cannot be ruled out, probably is reversible.

True indeed, but the double bond is there. 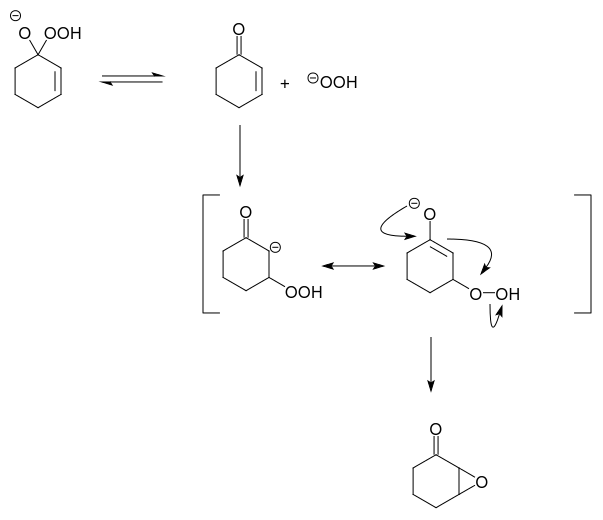 As a result, attack on the $\beta$-carbon of the enone, formation of a hydroperoxy enolate and subsequent formation of the epoxide are seemingly favoured.

First off, it may be useful to go back and take a look at this earlier question of yours and the answer to it. The concept of hard and soft electrophiles and nucleophiles was discussed. Basically, it was said that

Let's examine the system at hand, the nucleophile is the hydroperoxide anion ($\ce{HOO^{-}}$). You can draw two resonance structures to describe the anion, delocalizing the negative charge over both oxygens.

Therefore, this anion is a softer nucleophile than $\ce{HO^{-}}$

The carbonyl group is a hard electrophile, while an $\ce{\alpha,\beta}$ unsaturated carbonyl, where the electron density is distributed over 4 atoms is a softer electrophile.

Soft reacts with soft, so would you expect the soft hydroperoxide anion to preferrentially react with a hard (carbonyl; 1,2 addition) or soft ($\ce{\alpha,\beta}$ unsaturated carbonyl; 1,4 addition) electrophile?

109
Is there a general consensus on the causes of the alpha-effect?
6
What makes R-MgX a more reactive Grignard reagent than R-Cu?