In the Wittig reaction, a concerted [2+2] cycloaddition leads to direct formation of a four-membered ring, but this does not happen with the sulfur ylids. Instead, nucleophilic addition to the carbonyl occurs to give a betaine, which then decomposes via intramolecular nucleophilic substitution by the oxyanion. Thus, in the Corey–Chaykovsky reaction, we end up with an epoxide, while the Wittig reaction affords an alkene.

I am looking for an answer that explains the differences between the outcomes of these two reactions, and their respective intermediates. It would be great if the answer can be supported with references, and/or calculations.

There have been recent excellent summaries of the reaction profiles of the Wittig1 and the Corey–Chaykovsky2 reactions. For the purposes of answering this question, there's no need to go into exquisite detail about each individual step (a lot of the research has been poured into understanding stereoselectivities which isn't relevant here).

The general mechanisms are shown below, which should suffice; however, the interested reader is encouraged to consult the articles above.

Both reactions are considered to be essentially irreversible. As such, an argument based on the thermodynamic stability of the products cannot be valid.

For a kinetically controlled reaction, one should look at the activation energies of betaine vs. oxethietane or oxaphosphetane formation from the ylid and carbonyl.

As described in the answers there, true betaines have never been observed as intermediates in "salt-free" Wittig reactions, and have been rigorously disproven in some cases. Betaines can be obtained by deprotonation of their conjugate acids, called β-hydroxyphosphonium salts. However, the only observed products of this deprotonation are either oxaphosphetanes3 or the alkene + phosphine oxide products4. There is a large body of evidence for a four-membered transition state leading directly to an oxaphosphetane.1

If the phosphorus betaine is never formed, the next step to form an epoxide (intramolecular nucleophilic substitution) cannot occur. Hence, the Corey–Chaykovsky reaction will not occur with phosphorus ylids.

Very few cases of oxathietanes are known. A rare case was provided by Okazaki in 1996,6 characterised by NMR and crystallography:

However, the oxathietanes possibly formed in a typical Corey–Chaykovsky reaction differ from this in structure. For the model reaction of $\ce{H2S=CH2}$ with formaldehyde, an early computational study found a local minimum corresponding to an oxathietane with S–O bond length of 2.10 Å,7 and postulated that a Wittig outcome (alkene formation) did not occur because of the high activation energy to pseudorotation about sulfur as well as [2+2]-cycloreversion. However, these studies also did not take solvation effects into account, which will stabilise the highly charged betaine.

In a more recent DFT study, Harvey and Aggarwal2 were able to reproduce the molecular geometry of Okazaki's oxathietane, proving that there was no inherent computational bias against such structures. However, attempts to find a stable oxathietane from the addition of $\ce{Me2S=CH2}$ to formaldehyde, or from the addition of $\ce{Me2S=CHPh}$ to benzaldehyde, failed. In particular, the S–O distances in the optimised intermediates were 2.81 and 2.48 Å respectively (the full geometries are in the supporting information). Geometry optimisation starting from an oxathietane structure also yielded nothing but betaines.

Likewise, if an oxathietane cannot be formed, then the decomposition to alkene and sulfoxide cannot occur. Hence, sulfur ylids do not undergo the Wittig reaction.

Harvey and Aggarwal2 wrote of their inability to find oxathietanes:

Clearly, the energetic gain associated with bonding between these atoms [sulfur and oxygen] is more than offset by the ring strain it would entail.

Evidently, the key to understanding the different behaviour lies in bond strengths: not the double bonds in the product, but the single bonds in the oxetane intermediate. Kutzelnigg8 has found binding energies for $\ce{H2P-OH}$ (relative to $\ce{PH3 + O}$) and $\ce{HS-OH}$ (relative to $\ce{SH2 + O}$) to be 114 and 59 kcal/mol respectively. A qualitative explanation is not easy, and I am not really inclined to try.

As mentioned above, phosphorus betaines can be independently generated by deprotonation of β-hydroxyphosphonium salts. If we ignore the immediate cyclisation to form oxaphosphetanes, it is theoretically possible that these betaines could undergo intramolecular nucleophilic substitution to yield epoxides:

In a 2005 study, Aggarwal and Harvey again showed that such a process was much more energetically unfavourable for phosphorus than for sulfur.9 This was mainly rationalised by the poor leaving group ability of $\ce{PR3}$ compared to $\ce{SR2}$. Firstly, the intrinsic leaving group ability of phosphorus is lower (this is a purely kinetic measure of leaving group ability, based on the activation energy of the reaction $\ce{X + CH3X+ <=> X+CH3 + X}$). Secondly, the C–P bond is stronger than the C–S bond, which adds a further thermodynamic cost to epoxide formation. The difference in the energy profiles is striking: 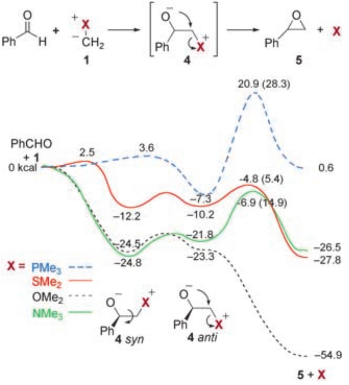 For $\ce{X = PMe3}$, epoxide formation from the betaine is associated with an activation energy of 28.3 kcal/mol. Compared to an essentially barrierless cyclisation to the oxaphosphetane, it is easy to see why such a process cannot compete.

For $\ce{X = SMe2}$, on the other hand, the activation energy is only 5.4 kcal/mol. In fact, as the authors had noted in their earlier paper,2 the major challenge in the Corey–Chaykovsky reaction is getting the betaine into the correct conformation for intramolecular $\mathrm{S_N2}$ (i.e. going from 4-syn to 4-anti in the scheme above)!