Melting and boiling points of benzene and fluorobenzene

This species is a derivative of benzene, with a single fluorine atom attached. Its melting point is -44 °C, which is lower than that of benzene, indicative of the remarkable effect of fluorination on the intermolecular interactions as seen throughout organofluorine chemistry. In contrast, the boiling points of PhF and benzene differ by only 4 °C.

Why is this true? Wikipedia doesn't elaborate on why.

From what I understand the melting point is the point at which the solid and liquid forms are in equilibrium.

Boiling point is the point at which the liquid and gas phases are in equilibrium.

The answer has everything to do with fluorine. Dunitz, in his early studies on fluorine interactions found that intermolecular $\ce{C-H..F}$ interactions can be solid-state structure (e.g., crystal packing) directing. In the case of fluorobenzene, the molecule adopts a solid-state structure that sacrifices long-range order so that these short-range $\ce{C-H..F}$ interactions can be preserved (also see here, and here where it is stated that, "Its [fluorobenzene] melting point is $\pu{-44 ^\circ C}$, which is lower than that of benzene, indicative of the remarkable effect of fluorination on the intermolecular interactions as seen throughout organofluorine chemistry"). The loss of long-range order in the solid-state, as compared to benzene, produces a lower melting point in fluorobenzene $(\pu{-44 ^\circ C})$ than in benzene ($\pu{5.5 ^\circ C}$). Note too that the "size" of fluorine in organic molecules is very similar to that of hydrogen (that is why it has found such widespread use in pharmaceuticals) - it is often referred to as a hydrogen "mimic" (see here). So steric (or symmetry) arguments cannot be used to explain the packing disruption with fluorobenzene.

Once the molecule is in the liquid state the intermolecular $\ce{C-H..F}$ short-range interactions are also diminished due to increased molecular motion; as a result, fluorbenzene and benzene boil relatively close to one another ($\pu{84 ^\circ C}$ and $\pu{80 ^\circ C}$, respectively).

The answer really doesn't have much to do with fluorine. Beacall's 1928 The melting-points of benzene derivatives explains on the first page that it has long been known "that the more symmetrical the constitution of a benzene derivative, the greater the resistance it offers to the passage from the solid to the liquid state".

In the more modern Effect of molecular symmetry on melting temperature and solubility:

As a general rule, symmetrical molecules in crystalline form have higher melting temperatures and exhibit lower solubilities compared with molecules of similar structure but with lower symmetry. Symmetry in a molecule imparts a positive amount of residual entropy in the solid phase (i.e., more possible arrangements leading to the same structure). This means that the entropy of a crystal of symmetric molecules is greater than the entropy of crystal of a similar, but non-symmetric molecule.

Benzene and hexafluorbenzene have almost the same melting point, while monofluoro, monochloro, monobromo benzene all have much lower melting points.

Both benzene and hexafluoro-benezne have a very stable "herringbone" crystal structure, where the edge of one ring approaches the center of another ring in a perpendicular manner. 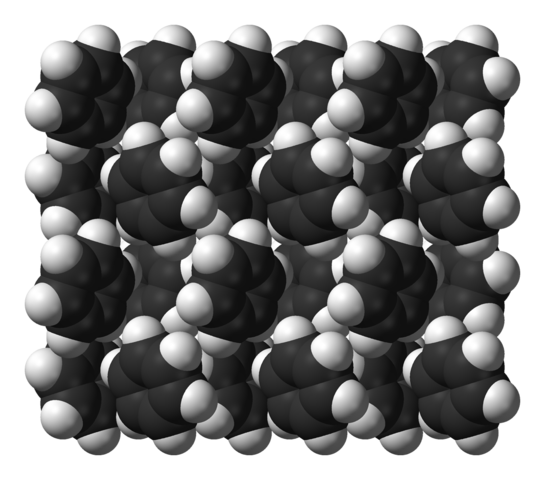 So realizing that the cyrstal structure of benzene is unusually stablized, it is understandable that the melting point of benzene is higher than monofluorobenzene, but the boiling point is not.

Not the answer you're looking for? Browse other questions tagged organic-chemistry aromatic-compounds intermolecular-forces boiling-point melting-point or ask your own question.

2
Why is the boiling point of trichlorofluoromethane lower than that of chloroform?